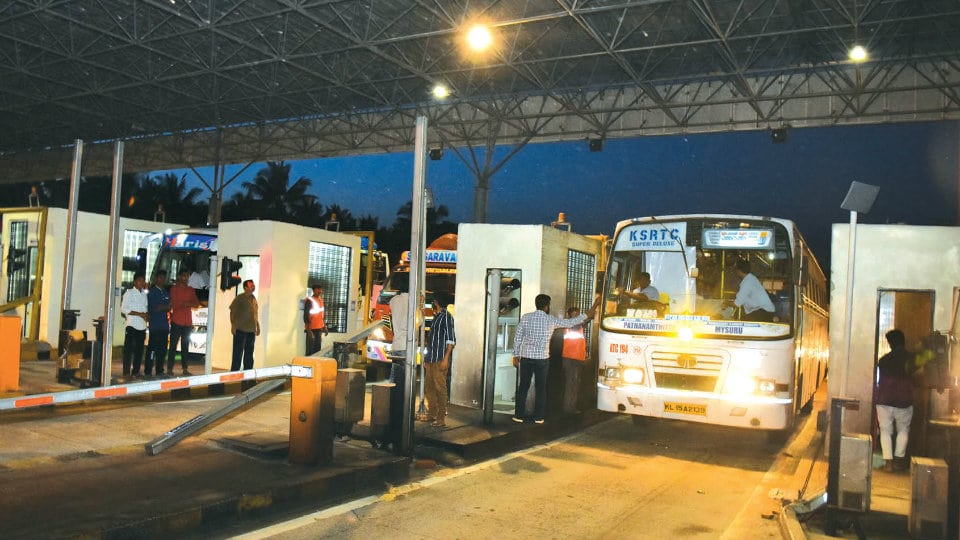 • Farmers, local residents oppose move as there is no service road to travel from one place to another

The Mysuru-Nanjangud Road touches Ooty, Mysuru-T. Narasipur Road touches Kollegal and Tamil Nadu and Gundlupet-Moolehole Road touches Kerala. All these roads are part of NH-766 (earlier NH-212)  that will become a tolled road. The toll is being collected since yesterday.

The toll system has been enforced at the Toll Plaza at Kadakola (K.N. Hundi, Nanjangud) and at Yedathore on the T. Narasipur Road. Banners mentioning the toll rates have been placed near the Toll Plazas. However, this move has been opposed by local residents, farmers and other organisations as the road is their only lifeline to  move their agricultural and horticultural produce.

Those commercial vehicles (yellow registration boards) that have been registered in the districts where the Toll Plaza is located (Mysuru for example as Nanjangud and T. Narasipur comes under Mysuru district) have been given a rebate of 45 to 50 percent in the toll fee.

For non-commercial vehicles (white registration boards) that have been registered in the districts where the Toll Plaza is located, monthly pass of Rs. 265 has been fixed. There will be no concession for two-wheelers, autos, tractors and other vehicles that carry agricultural and horticultural produce.

Even toll is collected from Government buses (also city buses that ply between Mysuru and Nanjangud) and other Government vehicles as there is no exemption. Discussion is being held at the higher echelons of KSRTC to negotiate a deal for regularly plying buses, sources said.

The NHAI has built the Highway with Private-Public-Partnership (PPP) model and had even constructed toll booths at various places. So far no toll was being levied from travellers and the toll booths were closed and were in an abandoned state.

The Ministry of Road Transport and Highways has issued a gazette notification to introduce toll on these roads on Nov. 20. The notification authorises the National Highways Authority of India (NHAI) to collect toll either through its officials or through contractors.

According to the gazette notification, three toll plazas will come up on this stretch bordering Kerala and Mysuru. It includes Maddur near Gundlupet, near Kadakola between Mysuru and Nanjangud and near Yedathore close to T. Narasipur.

FASTag deadline has been extended upto Dec. 15 by the Transport Ministry. The deadline was initially set for Dec. 1 but the Government has now extended it till Dec. 15. FASTag is meant to support Government’s plan for 100 percent electronic toll collection across National Highways in the country. The extension will serve as a breather for vehicle owners yet to get FASTag, a sticker that needs to be put at the front windshield of the vehicle.

The FASTag then becomes the radio frequency identity of one’s vehicle and it is automatically read by the sensors placed at Toll Plazas. The Highways Ministry had first written to the NHAI about conversion of all toll lanes to FASTag lanes at National Highways in July this year.  The move is meant to make travel through Toll Plazas seamless and will help remove congestion as well.

As soon as the NHAI began collecting toll yesterday, several farmer leaders, local residents and pro-Kannada activists assembled near the Toll Plaza and staged a protest. “The stretch is the only link that connects Mysuru to Nanjangud, Mysuru to T. Narasipur and Gundlupet to Moolehole. The road is taken by farmers who take their produce to Kerala and Mysuru. There is no service road on the Highway that facilitates the movement of farmers and local residents,” they said.

Following the protests, toll collection was suspended for over one-and-a-half hours and the Police had to intervene. Even Nanjangud MLA B, Harshavardhan has expressed his displeasure over NHAI authorities implementing the toll in the absence of service roads.