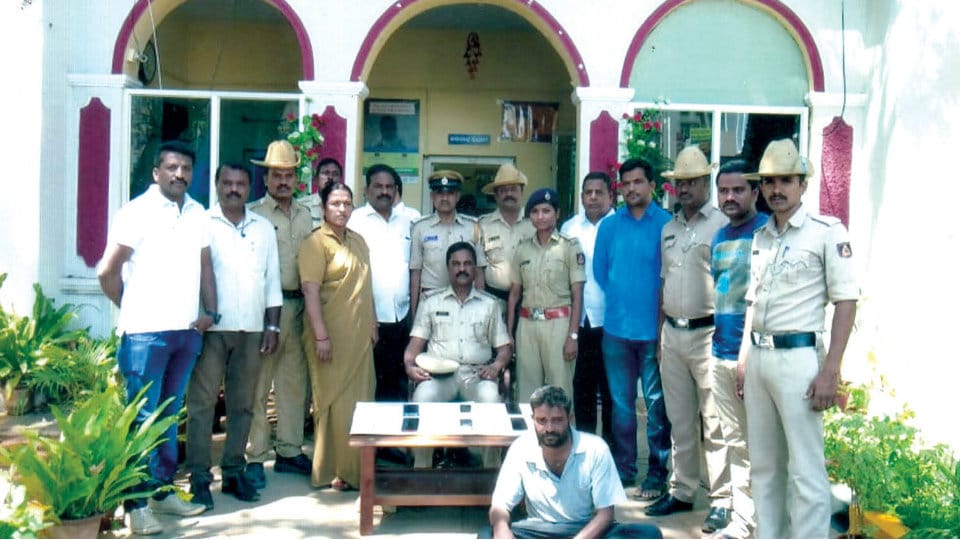 Mysuru: The Lakshmipuram Police have cracked the mysterious case of theft of a bag containing five high-end mobile phones from Maharaja’s College grounds recently, with the arrest of a 35-year old man.

The arrested has been identified as 35-year-old Kantharaju of Gurupura village in Hanagodu, hobli of Hunsur Taluk.

The Police have recovered six expensive cell phones worth about Rs.1.1 lakh from him.

Following a complaint that five high end cell phones of different brands, kept in a bag were found stolen when they were playing football at Maharaja’s College Grounds on Mar.1, Lakshmipuram Police had registered a case and took up the investigation.

Acting on a tip off, Lakshmipuram Police picked up Kantharaju and during interrogation he confessed to have stolen the bag containing five mobile phones from Maharaja’s College Grounds and also stealing a cell phone from a hair cutting saloon at Mangaluru following which the Police, recovered six mobile phones worth about Rs.1.1 lakh from him.