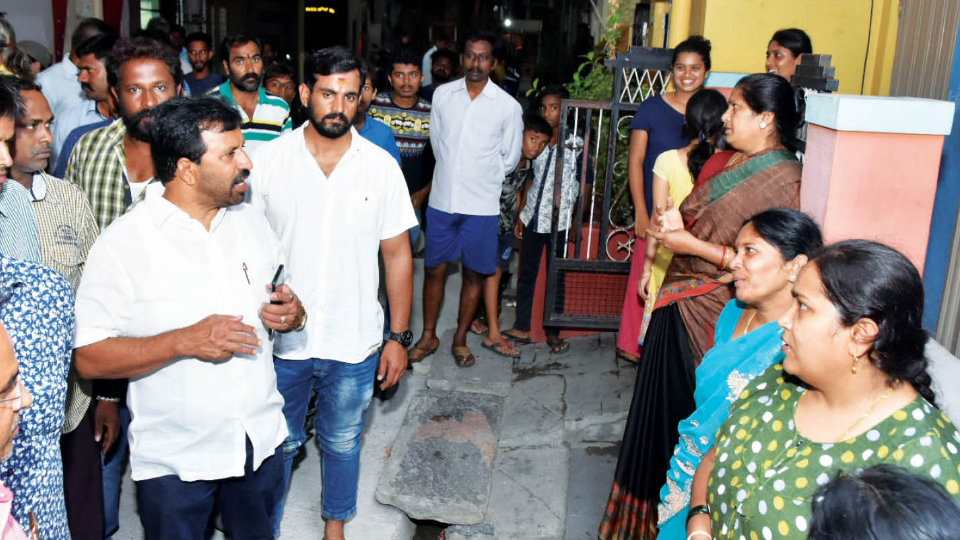 Mysuru: MLA L. Nagendra has urged the Police Department and the MCC to clear the encroachment on footpaths in streets around Mission Hospital, Mandi Mohalla and thus pave the way for free pedestrian movement and parking of two- wheelers.

Speaking to press persons here yesterday after visiting the families of the victims of the group clash that took place near Mandi Mohalla Market over a trivial issue on Sunday night, Nagendra alleged that a group comprising members of a community had damaged houses, cars, two-wheelers and other properties and even threatened residents.

Nagendra further alleged that miscreants have smashed the window panes of the residence and also damaged houses and vehicles of several other residents.

The MLA urged the Police to take stern action against miscreants who had damaged properties over a trivial issue.

The Military Hotel and its adjacent Textile shop, which were the root cause of the clash, remained open on Tuesday and did business as usual.

The clash had erupted after the owners of the Military Hotel and the Textile shop entered into a heated argument over parking of two-wheelers in front of the shops.

Following the clash, MLA L. Nagendra took out a padayatra in troubled areas of the locality last evening and instilled confidence among the residents.

Even as the locality returned to normalcy yesterday, Mandi Police continued their patrol in the backdrop of Ramzan festival.