Mysuru: The Gowri-Ganesha festival is fast approaching (Aug.24 – 25) and the District Administration is making all efforts to ban the manufacture and sale of Ganesha idols made of Plaster of Paris (PoP) and chemically-coloured idols.

Deputy Commissioner D. Randeep, who chaired a meeting here yesterday at his office, warned that stringent action will be taken against those who manufacture or sell idols made out of PoP, in spite of the ban.

He directed the officials to take action as per law if they found anyone installing the idols of Ganesha made of PoP. He also said that such idols should not be immersed in lakes or ponds as it pollutes the water bodies. He referred to the circular issued by Karnataka State Pollution Control Board (KSPCB) that last year there were many who had installed PoP Ganeshas and they had all been warned not to repeat it this year.

Randeep said that many voluntary organisations are trying to create awareness about the harmful effects of PoP and chemical-laden coloured Ganesha idols to the environment and advising them to use clay to make Gowri-Ganesha idols. Hence, the District Administration was also coming forward to join hands with such environmentalists and planning for mobile tankers to immerse the idols.

KSPCB Environmental Officer B. M. Prakash said that the guidelines for idol immersion had been framed by the Central Pollution Control Board and also the National Green Tribunal had ordered the ban of immersion of PoP idols in water bodies. The reason for the pollution of rivers and lakes has been found to be due to immersion of such idols during Ganesha and other festivals. Hence, the KSPCB has given directions to the District Administration in all the districts to strictly follow the guidelines and take prompt action against the violators.

MCC Health Officer Dr. Ramachandra said that they had issued a notice in March itself against the use of PoP and coloured Ganesha idols and instructions have been issued to every Zonal Office to take action against those who install idols made out of PoPs and if found, confiscate them.

Mysore Grahakara Parishat Secretary M.M. Shenoi said that awareness must be created regarding the harmful environmental effects of PoP idols and added that committees must be constituted to take the message to the people. 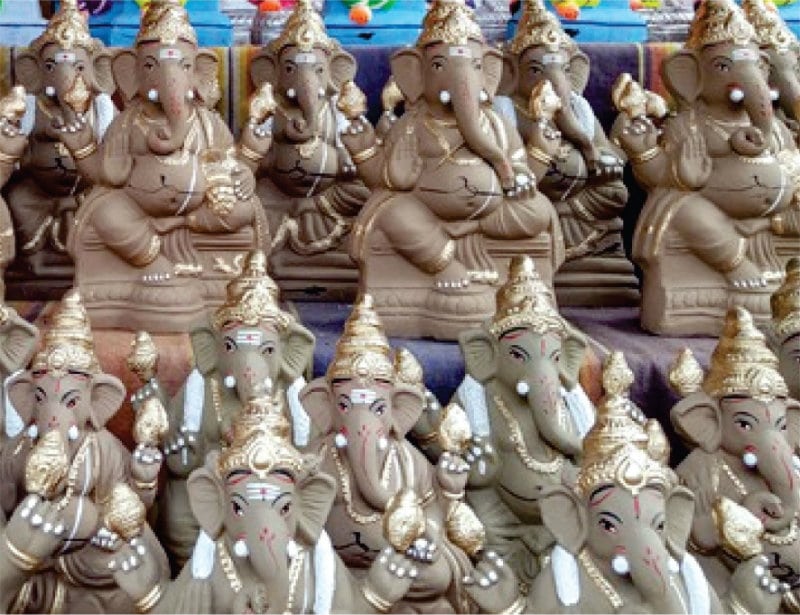 Environmentalist Prof. K.M. Jayaramaiah said that everyone must be made aware of the damage to the environment by the use of PoP idols.

A few of the sellers who were present at the meeting assured that they were not selling the PoP idols anymore. However, they said that in Bengaluru it continued to be sold. The DC said that he would check about it.

They also said that at the check posts the idols from other States were being allowed without being checked because they felt that as they were idols they should be allowed freely.

The banning of PoP idols has come as a big relief to genuine clay idol-makers of Ganesha and Gowri as clay is more environment friendly. “The demand for colourless Ganeshas has increased by more than 20 per cent after the ban on PoP idols. Generations of our families have been involved in making clay idols and it comes as a big relief that the government has imposed a ban on such idols,” said environmentalist and clay idol-maker for decades D. Revanna, a resident of Kumbarageri.