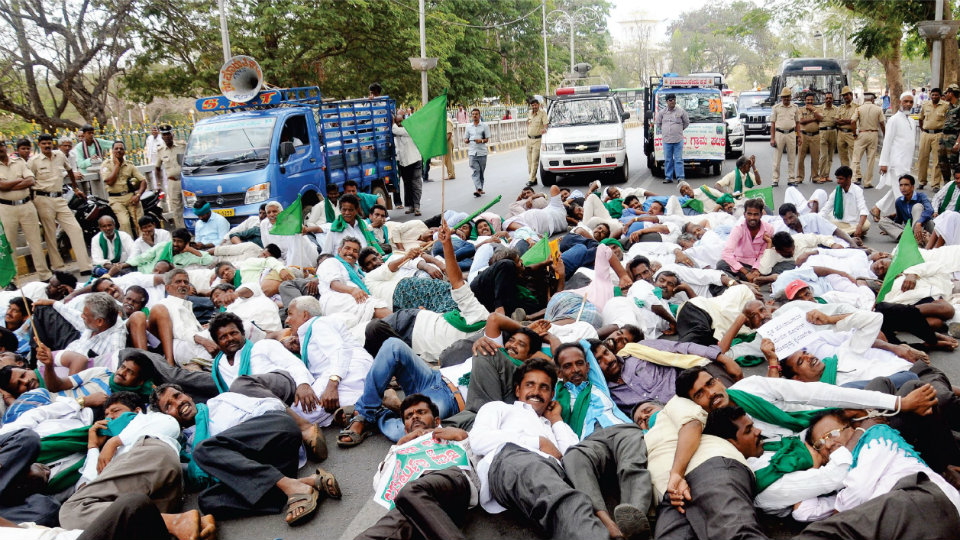 Hundreds of farmers, under the banner of Karnataka Sugarcane Growers Association, staged a demonstration in front of the DC’s Office here this morning, seeking fulfilment of their demands.

The farmers, who raised slogans against the CM, District in-Charge Minister and District Administration, demanded fulfilment of their 11-point charter of demands, which included payment of paddy crop loss compensation at Rs. 25,000 per acre, stipulation of FRP (Fair and Remunerative Price) for Sugarcane at Rs. 3,000 per tonne, scientific compensation for crop loss due to drought, dropping of criminal cases registered against farmers involved in Cauvery, Kabini and other farmer issue agitations, uninterrupted supply of quality power for at least 10 hours a day and waiver of all farm loans in the wake of drought, among others.

Earlier, traffic on the ever busy Sayyaji Rao Road was disrupted for over 30 minutes, as farmers squatted in front of MCC Office in  protest against the Police action of stopping them from marching to the DC’s office.

The farmers, from across Mysuru and neighbouring districts, who assembled at Gun House Circle, marched in a procession to the DC’s office, when they were stopped in front of the MCC Office on Sayyaji Rao Road.

As Police refused to allow them to march further, the farmers squatted on the road to register their anger. As a result, vehicular movement was severely affected on the busy road, which was already congested, with very high traffic density due to blocking of the roads around the Palace  for concrete works. The motorists and pedestrians had hard time and their plight ended after 30 minutes, when the Police apparently, under instruction from the higher-ups, permitted the farmers to continue with their march.