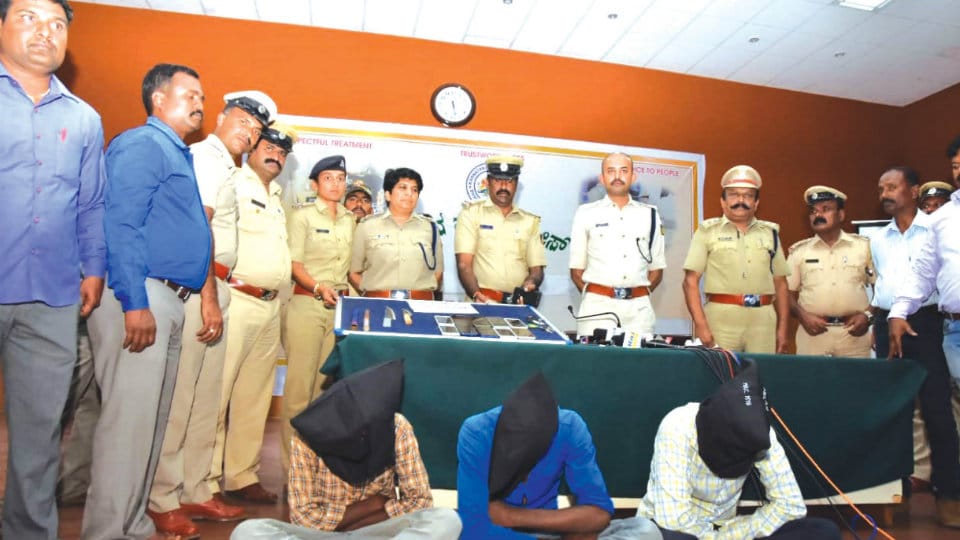 Mysuru: Match box please! Beware if anyone asks you this. As you might be the target of dacoits. The Nanjangud Police have arrested a gang that used to rob people by asking for a match box. The moment the request for match box is placed and when the person obliges, the gang was robbing him the next moment. They are now cooling their heels as Nanjangud Police have arrested the gang that includes two juvenile offenders.

By arresting them, the Nanjangud Police have cracked many cases of dacoity committed in Nanjangud and other areas.

Stating that Varuna and Syed were auto drivers and Jayanth is a PUC student while the two minors had discontinued education after SSLC, the SP said that the gang used to target lonely persons late in the night and mug them of their cash, jewellery and other expensive belongings at knife-point.

Explaining the modus operandi of the gang, Ryshyanth said that the gang used to lift two-wheelers parked in front of the houses late in the night using duplicate keys. While two members of the gang came in a stolen two-wheeler and approached lonely persons under the pretext of asking a match box, the three other members who came in another stolen motorcycle, would catch hold of the victim at knife-point and rob them of their belongings including cash, jewellery, mobile phones and other expensive articles.

The gang used to park the two-wheelers at the same spot from where they had stolen them before the break of dawn, without giving rise to any suspicion to the vehicle owners. Following many such dacoity cases were reported within a few days, the Police launched ‘Operation Decoy’ to nab the culprits.

READ ALSO  Ox electrocuted after live wire falls on it

The gang is also suspected to have committed similar crimes in Gundlupet, Santhemarahalli, Ring Road in Mysuru and other places and further investigation is on.

The SP announced a cash reward of Rs.30,000 to the team which arrested the gang.