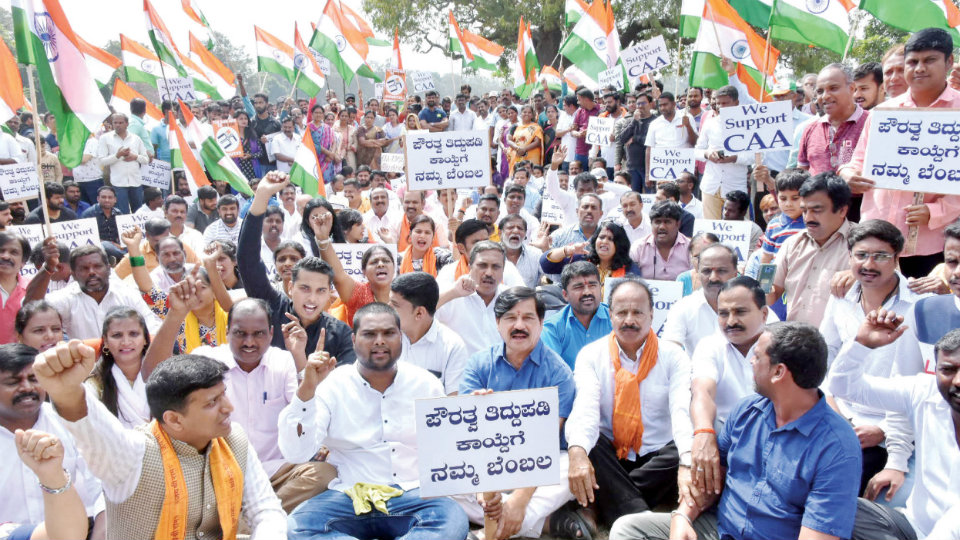 Campaign in support of Citizenship Act held in city

Mysuru:  Members of various organisations numbering nearly 500 held a campaign in support of Citizenship Amendment Act (CAA) at Oval Grounds near Deputy Commissioner’s Office after they were denied permission for a peace rally this morning.

As the Prohibitory Orders was in place, the campaigners, who were to assemble near Kote Anjaneyaswamy Temple and take out a peace march up to the Office of the Deputy Commissioner by passing through the main thoroughfares of city, assembled at the Oval Grounds, where they held the campaign.

During the campaign, led by MLA S.A. Ramdas, BJP National Council Member B.P. Manjunath, former MLC Thontadarya, former Mayor Sandesh Swamy and others, the campaigners shouted slogans in support of CAA and demanded action and punishment against those involved in anti-CAA protests.

MLA Ramdas said that the CAA was not a new Act as it was implemented earlier — first in 1947 and again when Dr. Manmohan Singh was the Prime Minister. A few miscreants were misleading the people, when the fact it the Act provides security to all religions including minority communities, he added.

Ramdas further said that the campaigners would meet all minority community religious leaders and youth from today and create awareness about what actually the Citizenship Amendment Act is all about.