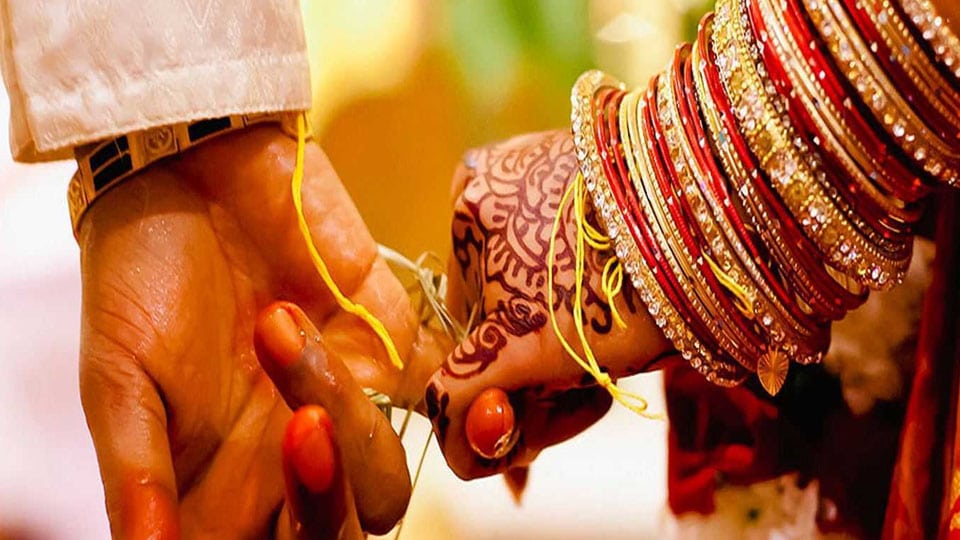 Mysuru: A man has been arrested by Krishnaraja (KR) Police in city for allegedly cheating widows on the matrimonial and dating sites after befriending them. The women were made to believe that they were dealing with genuine groom and they were conned later.

The conman has been identified as 47-year-old Vineeth Raj, a resident of Coimbatore in Tamil Nadu. He has been charged with cheating a widow by taking away her mangalsutra worth Rs.80,000 after promising to marry her. He has cheated one more woman from Vidyaranyapuram in Mysuru and one from Indiranagar in Bengaluru.

The widow, who was cheated recently, is from city and she had uploaded her profile on shaadi.com in the hope of getting a suitable life partner. After the profile was updated, last month, Vineeth Raj contacted the woman through the matrimonial site and introduced himself as a businessman from Coimbatore. They exchanged their mobile numbers.

Vineeth Raj told the woman that he would come to Chamundi Hill in Mysuru on Nov.18 and asked her to meet him. Both of them met at a designated place and to impress her, Vineeth Raj had brought his car. Stopping the car midway, he told her that a priest in Tamil Nadu had told him that before marriage, both of them should ward off evil forces and for this, the couple must exchange their chains (mangalsutra and gold chain).

Exchange of gold chains: Sensing no trouble and impressed by the conman’s approach, the woman handed her 30-gram mangalsutra to him worth Rs.80,000. Vineeth Raj too gave her a chain that he was wearing. The woman failed to realise that it was imitation jewellery.

They exchanged the jewellery and went up the hill. Vineeth Raj then told the woman that they can take back their respective jewellery once they return from the Hill Temple. After having a darshan, they went to a silk shop in Nazarbad that had a hotel on the fifth floor and ordered coffee. The woman told him that she would go to the rest room. The woman realised that she was conned as the man had fled their table. Later, when she checked the gold chain with the jeweller, she found out that it was fake.

The widow then lodged a complaint with Krishnaraja Police Station and handed his phone number, description and the model of the car. Based on Call Detail Records, the Police traced the conman’s movements and obtained CCTV footages from the hotel. Obtaining his car’s registration number, the Police arrested him from Coimbatore.

Investigations have revealed that he has cheated two more women whom he met through matrimonial sites by promising them to marry. One of the women is from Vidyaranyapuram in Mysuru and the other is from Indiranagar in Bengaluru. He had used similar tactics to rob the women of their valuables.