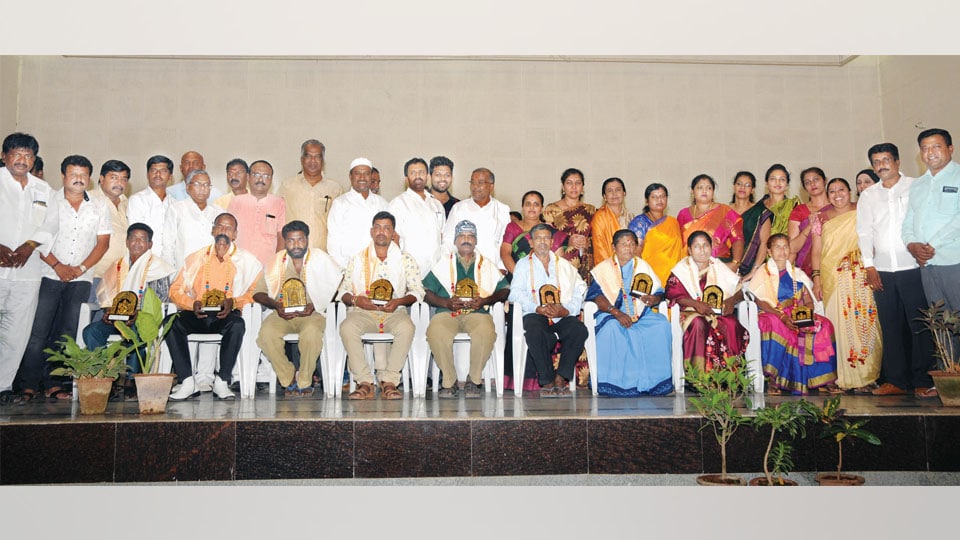 Mysuru:  Mysuru City Corporation (MCC)  felicitated Pourakarmikas and hosted lunch for them on Sunday for their valuable contributions which helped the city bag the third Cleanest City award and 5 Star status for garbage-free city in the Swachh Survekshan-2019 which were announced recently. District in-Charge Minister G.T. Devegowda, Mayor Pushpalatha Jagannath and MLA Nagendra feted nine selected Pourakarmikas at the function held at Rajendra Kalamandira in city.

In his address, District Minister G.T. Devegowda called upon MCC to strive hard to make the city to get top position in the next Swachh Survekshana.

Earlier, confusion prevailed for sometime at the function hall when the leaders of MCC Underground Drainage Cleaning Workers Association members Palani, Kumaraswamy,  Rajagopal and others shouted slogans against the organisers and expressed their displeasure on the Mayor and MCC Commissioner Shilpa Nag for not felicitating them. They alleged that they were not invited for the programme and the Civic Body had not recognised their services though they had been contributing equally in keeping the city clean besides helping the city to get the Cleanest City award. Later, Pourakarmika leader Narayana pacified them.