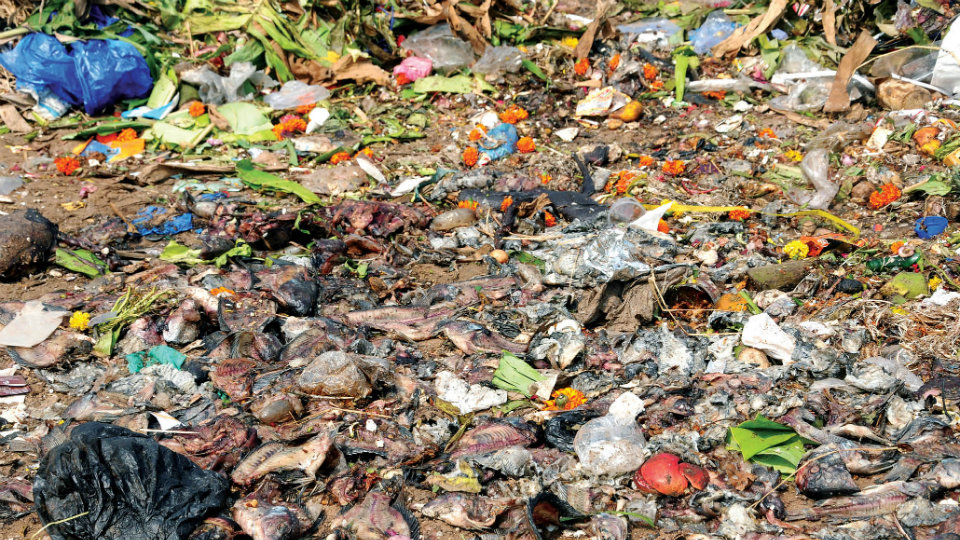 Mysuru: With timely and appropriate disposal of all sorts of wet waste and garbage posing a daunting challenge to the Mysuru City Corporation (MCC), the Civic Body will embark on conducting a survey of hotels, lodges, hostels, marriage halls, industries etc., on the generation of wet waste at those points.

Mysuru, which a few years ago had earned the ‘Cleanest City Tag’ twice consecutively, is now facing a big challenge in handling and disposal of waste with the city producing 402 tonnes of waste everyday on an average. Following numerous complaints on improper disposal of waste, the MCC authorities have planned to conduct a survey on the quantity of waste produced at large generation points such as hotels, restaurants and slaughter houses, etc.

To begin with, an MCC team headed by Environmental Engineers has planned to visit hotels, bars and restaurants, apartments, kalyana mantap, hostels, etc. in the first phase.

According to the Karnataka Municipal Act, Hotels, Restaurants and such other commercial establishments which produce large quantity of waste, are required to set up a wet waste disposal system of their own within their premises. But most of the owners of the mentioned business have not followed the rule and have been indiscriminately throwing waste all over.

Even as the MCC officials have decided to conduct the survey, residents living around large waste generation spots have complained to the authorities on the stench and other health hazards posed by unscientific disposal of waste and garbage.

READ ALSO  Will Ward Committees be a reality in Mysuru?

Fed up with unending complaints, MCC teams from all the nine zonal officials will launch the survey in order to address the challenging issue of making the city free from garbage, wastes, debris and other forms of waste.

MCC Commissioner Shilpa Nag has said that the initiative is part of efforts to keep the city clean. Stressing on the need to sensitise the owners of the hotels, restaurant etc., on the hazards of undisposed wet waste, she said that commercial establishments producing voluminous wet waste must do something for effective and appropriate disposal at their premises or else the MCC will act against them as per the law.

She said that hotels, lodges, apartments and choultries that generate more than 100kg of wet waste every day have to set up wet waste disposal units at their premises, as per the Karnataka Municipal Act. “But except for a few apartment complexes, none of the establishments are following the rule. Our survey will identify such places and we will visit the place personally to see how much of wet waste is generated,” she said.

Once the survey is complete, owners and occupants of such hotels and apartments will be called and awareness will be created on wet waste disposal. “A series of workshops and awareness programmes have been planned to sensitise people on scientific wet waste disposal. If establishments do not comply with rules even after such workshops, we will take legal action against them as per the Municipal Act,” Shilpa Nag added.