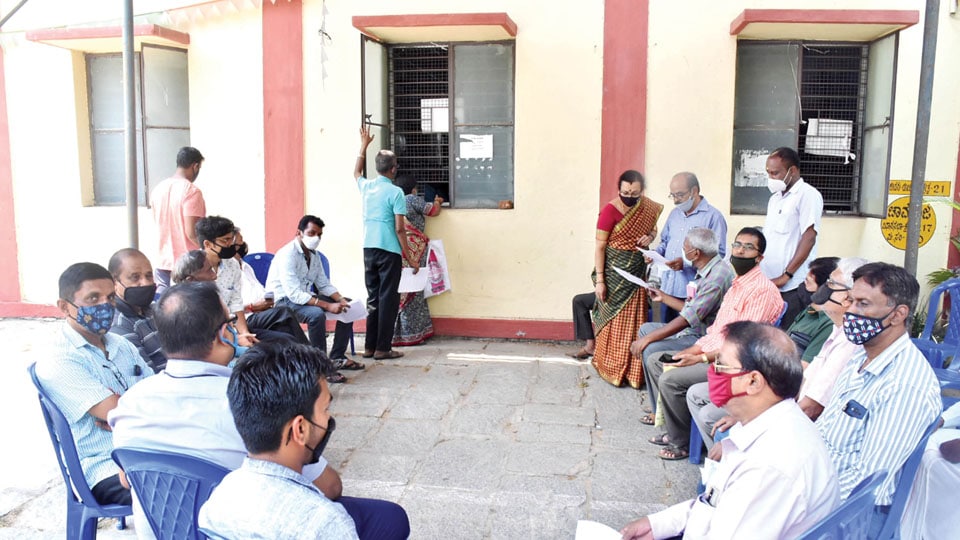 Mysore/Mysuru: A  section of property owners in city have been facing issues while paying taxes for their sites, buildings, commercial complexes or houses online as the Mysuru City Corporation (MCC) is facing teething problems with its online property tax payment site.

These problems included high property tax amount displayed, Property ID (PID) or mobile number not accepted and slow and an unresponsive website. Some of them complained that the site did not open or the link to the revised tax zone did not appear even on entering the PID number, forcing the citizens to sit long hours staring at their desktops and laptops.

Most property owners are trying to pay the tax before April-end to avail of the five percent rebate. But they have to make multiple attempts before the payment is received, because of the faulty system. Either the web interface is slow or page error message is shown. Many residents who spoke to Star of Mysore and also mailed screenshots of error messages said that the MCC must first eliminate systemic errors before asking people to revert to online payments.

V. Rajagopalachar, a resident of Ramakrishnanagar ‘H’ Block told SOM on Wednesday that he has been unable to feed Form 1 in the portal since the past 6 days. “Repeated messages sent to MCC remained unanswered and no information is available as to when the defect is likely to be rectified,” he said. But on Friday, this problem was rectified and Rajagopalachar wrote to us and said that he could finally pay the tax after seven days.

Non-bilingual and ‘read only’ pages

George C.A. Rego, a resident of an apartment on Gokulam Main Road, said that after successfully going to the actual tax payment page of the website, the SAS is blank and there is no way to download the SAS to first workout the data needed. “Unfortunately, the SAS form is not bilingual (there are many residents who can speak Kannada but cannot read or write).The SAS format on the site is ‘read only’ and therefore the tax-payer cannot enter his name address, property details, etc.,” he said.

Also, there is no explanation of how to arrive at the figures and what the calculation should be (there is no guide and no example or explanation). “I used Google to translate 46 rows of Kannada description of the SAS in order to help those who cannot read or write Kannada. I compared it with the SAS of 2019-2020 (which was computer-generated by the MCC staff) it had 45 lines of data to be filled up, based on the property ownership,” Rego said.

Regarding other glitches, Rego said that after the portal opens with the details of the individual tax payer, https://mysurucitycorporation.co.in/WebSiteMysuru/PropertySearch.aspx the ‘View Tax &Pay’ is activated, the tax-payers get a blank form where names cannot even be typed.

Dr. M.S. Narayan, a resident of Saraswathipuram (Sharadadevinagar Zone – Ward 42) wrote to SOM thus: “I went to the website and I read the instruction as ‘If you know your PID, then search by PID and you will get the property details’; ‘click on view link to see your complete property tax details’; ‘click on Get Form-2 or View Tax & Pay on the next page to proceed with online payment’ ‘Please download or print acknowledgement on successful property tax online payment’. To my surprise, it does not work and I get an ERROR message. It looks like the website has a problem.”

Explaining the problem further, Dr. Narayan said that if a tax-payer knows the PID then he/she can click the search button and get the property details. Once a tax-payer clicks on ‘view link to see complete property tax details’, the details are actually visible. “Later if the tax-payer clicks on ‘Get Form-2’or ‘View Tax & Pay’ in the next page to proceed, the form appears, but he cannot do anything as it does not accept any commands. “I cannot fill any details or any details about the tax appeared for me to verify. Here is the problem,” he added.

READ ALSO  Will Ward Committees be a reality in Mysuru?

Also, the portal constantly displays messages like: ‘An error occurred during local report processing’; ‘The definition of the report ‘Main Report’ is invalid’; ‘The embedded image ‘logotrans’ contains invalid data’; ‘Embedded image data must be a base 64 encoded string,’  Dr. Narayan explained.

Problems will persist for some more time: MCC

Admitting that such initial glitches were inevitable in the transition from manual to online collection of Property Tax, MCC officials said that problems with the software would be ironed out.

MCC Deputy Commissioner (Revenue) Dr. Nagaraj told Star of Mysore that the software has been encountering technical glitches. “Yes, I admit that issues are there and at the same time, we have dedicated teams comprising software engineers and officers to solve the glitches. Problems will persist for another two to three months and later, a fool-proof system will be developed as all the bugs will be fixed,” he said.

From Apr. 1 till Apr. 8, Rs. 1.30 crore has been collected exclusively through the online system. “Those property owners who have obtained the PID number after paying tax last year, can visit https://mysurucitycorporation.co.in/WebSiteMysuru/Home.aspx and pay taxes directly for assessment year 2021-2022. In case the PID is not obtained, property owners can visit their respective Zonal Offices and meet Revenue Section Officers to generate SAS (Self-Assessment Scheme) forms and ask for PID number. Later, they can pay either through online or through offline means,” he explained.

“We are trying our best to ensure that there will be no more issues with the software. For the convenience of the tax-payers, both online and offline tax-paying systems have been retained. Online is a sustainable method of paying the tax,” he stressed.