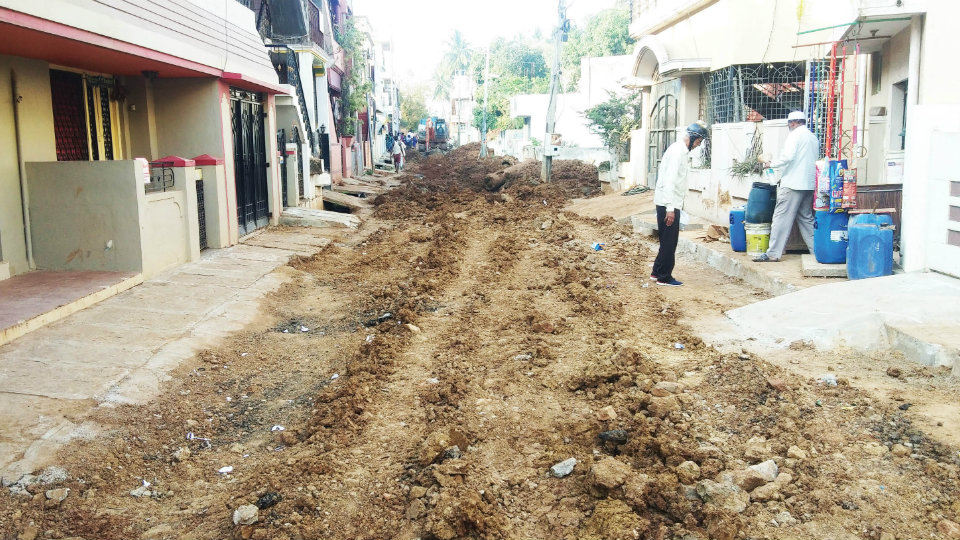 Mysuru: The laying of new sewer pipes taken up in an unscientific manner by the Mysuru City Corporation (MCC) has damaged drinking water pipes, underground cables and underground sewage pipes resulting in the residents inhaling dust, foul smell which may cause health hazards to them (residents).

The MCC has taken up laying of new sewage pipelines at a cost of Rs. 4 crore from Sewage Farm, which passes through Vidyaranyapuram 23rd Cross – 4th Main Road – Sarvajanika Hostel – Sarada Vilas College and ends near Ballal Circle. But the works are taken up in a haphazard and unscientific way causing a lot of problems to the residents in the surroundings.

To lay the pipes, the MCC has dug up 23rd Cross and 3rd Main Road and has dumped the excavated mud on the road severely inconveniencing motorists and the public who are unable to use the road. More than solving the problem, the works have created problems, said former Corporator Sunil.

Collapsed manhole: While digging the road to lay pipes, three manholes on Vidyaranyapuram 3rd Main Road have collapsed. A distraction while riding even for a second will land motorists in the ditch.

Dust: As the excavated mud is dumped on the road, vehicles passing on this stretch blows up dust which is accumulating on the houses nearby and also entering houses. This minute dust particles can cause severe breathing problems especially to the children and senior citizens.

Drinking water, UGD pipes damaged: During digging works, pipes supplying water to houses and sewage pipes have been damaged. Also, the underground power cables connected to power lines to supply electricity to houses have been snapped.

Compound damaged: An earth moving machine used for digging trench to lay pipes has reportedly hit the compound of a house and damaged it. Excavated mud which has been dumped on either side of the road  is hampering smooth flow of traffic.

Take precautions: The works pertaining to the supply of water 24×7 has been completed and the implementation process is in progress.

But the MCC while digging trenches to lay sewage pipes on the Cross roads on 4th Main Road and Sewage Farm Road in Vidyaranyapuram has damaged the newly-connected pipes to supply water to houses and hence precautions must be taken while taking works in future, which has to be instructed to the contractors. Also, the contractor should be instructed to take up the repairs of the damaged pipes, according to the memorandum submitted to the MCC Executive Engineer, Underground Drainage Division, through the Assistant Executive Engineer of Karnataka Urban Water Supply and Drainage Board (JnNURM).