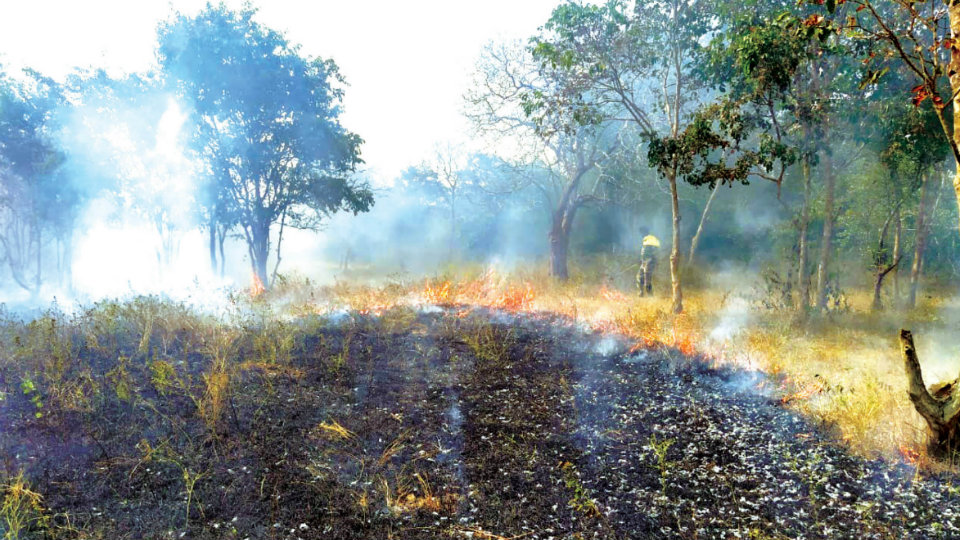 Mysuru: While the whole world is aghast over the bushfire in Australia, which has claimed the lives of hundreds of wild animals and devastated thousands of acre of forest land, the Bandipur Forest Department staff have taken all necessary precautions to prevent forest fire in the reserve forest area with villagers in forest borders coming forward to join hands with the Forest staff.

Hundreds of acres of Bandipur forest was burnt in the forest fire last year with large quantity of trees and plants destroyed due to the fire. Thanks to copious rains this years, the forest has turned green again with almost all the water holes filled to the brim.

The Forest Department, which has taken up the challenging task of protecting the forest against fire, has sought the help of villagers and villagers residing in the border of Bandipur Forest have come forward to join hands with them.

Fire Line completed: Bandipur Forest is spread over 1,024 sq. kms (2.80 lakh acres). Fire lines covering all 13 ranges of the reserve have been completed, covering 2,550 kms. Based on the thickness of the forest, fire lines measuring 5 mts, 10 mts and 20 mts in width have been created to prevent any accidental fire from spreading further and the Forest Department, in order to give more responsibilities to locals, had decided to take them on contract basis but apart from Nugu Zone, none had come forward to create fire lines in other 12 zones. In this backdrop, the Forest Department itself has created fire lines and additional fire lines have been created in some parts of the Bandipur Forest.

READ ALSO  Deer poaching: One arrested, hunt on to nab 15 others

The burning process of lantana plants which are removed in all zones and dumped in one place would be completed by Jan. 15. It is only then the fire beat works would be taken up.

Awareness programme: In a bid to create awareness about the devastation caused by forest fires to the residents of 123 villages in the forest borders, the Forest Department has distributed handbills at some places besides conducting street plays on the importance of forest and its conservation.

Sports activities were also conducted to draw the attention of youths and win their confidence.

Necessary precautions have been taken at all 13 Zones by creating 2,550 kilometre-long fire line to protect the wealth of Bandipur Forest against forest fire during summer this time. Burning of weeds is in its last stage. 55 Fire Watchers (40 daily wagers and 15 permanent) have been deployed in each Zone to prevent any accidental forest fire. As a result of awareness programmes conducted by the Department, many people residing in villages on forest borders have come forward to join hands with the Forest personnel, says T. Balachandra, Director, Bandipur Tiger Reserve.