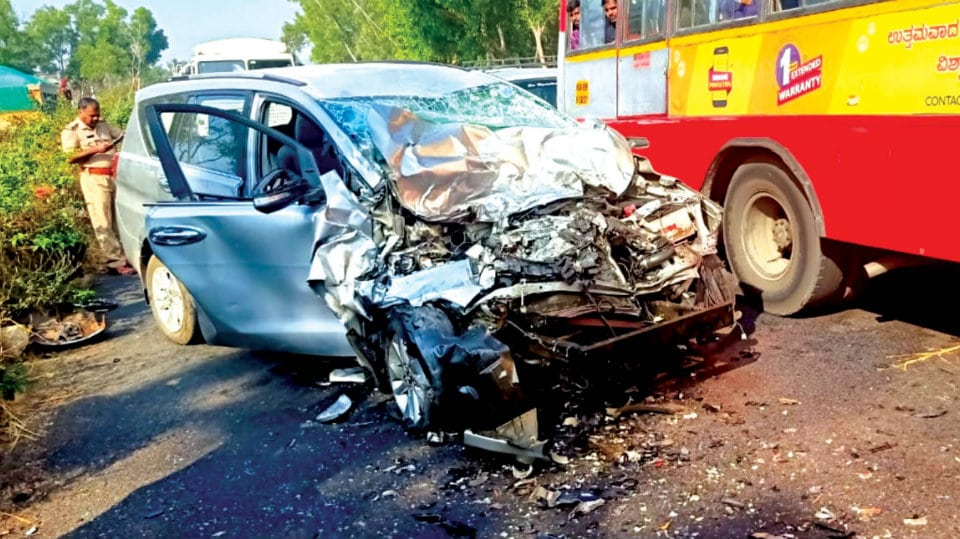 Hunsur: A couple from Kerala were killed on the spot, when the car in which they were travelling towards Hunsur, jumped the road median and crashed into an Innova vehicle coming on the opposite lane this morning.

The deceased are Lillykutti (54) and her husband Mathew (58). They were the residents of Talapurambam in Kandapuram taluk of Kerala. The couple’s son, who was at the wheels, has sustained serious injuries and has been rushed to a hospital in Mysuru.

The occupants of the Innova vehicle too have received injuries and admitted to a hospital in Mysuru.

Lillykutti, Mathew and their son, were proceeding towards Hunsur in their Maruti Swift Dzire car (KL-58 P-856), when the car jumped the median and crashed into the Innova vehicle (KA-09 MD-0468) coming on the opposite lane killing the two.

Bilikere Police, who rushed to the spot on receiving information, shifted the injured to hospitals in Mysuru and the bodies of the deceased to Bilikere Government Hospital mortuary.

No case was registered, when we went to the Press.