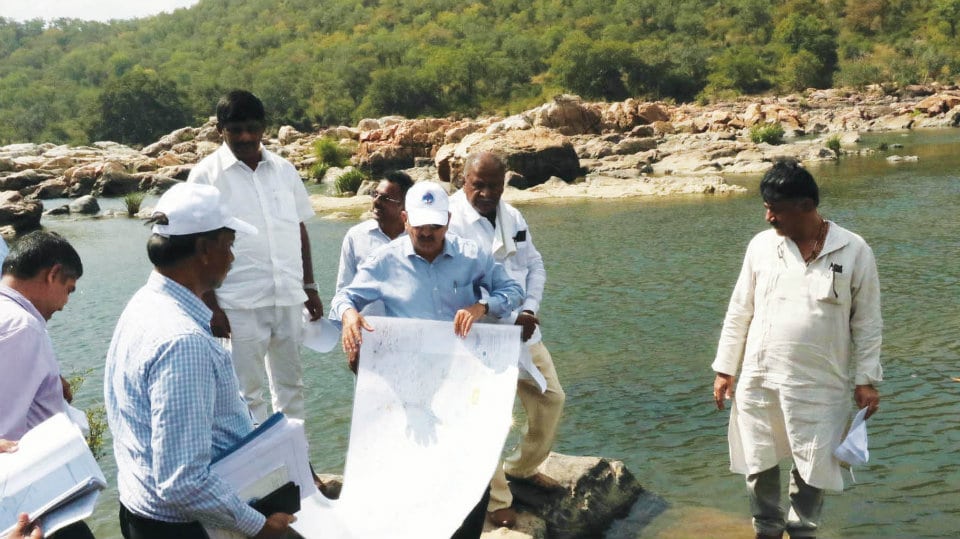 Mekedatu : Minister for Water Resources D.K. Shivakumar  (DKS) has expressed surprise over Tamil Nadu (TN) calling for a Special Legislature Session over Mekedatu drinking water project taken up within Karnataka and said that the riparian State should realise the benefits as it was not an irrigation project.

The Minister, who inspected the project site along with a massive official and media entourage, said that TN CM Edappadi Palaniswami would soon respond to his letter, seeking a meeting for discussing the project.

“The people of the two States have no problem living together. The Mekedatu project will be a project that will bind this relation further. There will not be any problem for farmers in TN as this project will only help neighbouring State supplementing the water supply from upstream dams of Cauvery River,” DKS explained.

The Minister said the project is proposed by Karnataka government only to augment hydro electric power and use a small portion of water for drinking water supply in parched areas within South Karnataka. The rest will be run of the river and no water will be impounded for irrigation purposes. “People and leaders of TN must understand the benefits of this project. But there has been opposition to this project for political reasons. The Karnataka government is ready to allay all such apprehensions and ready to talk to the TN leadership. Also, the Centre must intervene here,’’ he said.

He said the project that will help Karnataka add 440 MW of power production will be built at a cost of Rs. 5,500 crore and Energy Department would contribute Rs. 2,000 crore and the rest by Water Resources Department. He said that his Department had sought an exemption under the Karnataka Transparency in Public Procurement Act, for speedy implementation of the project.

The Minister said this project will not come in the way of the Cauvery water allocation to the extent of 177.5 tmcft of water from Karnataka to TN. But this would help impound 67 tmcft of water that otherwise flow into the Bay of Bengal in surplus season, or supply the water to TN in case of deficit rainfall.

Mekedatu is a spot where River Cauvery flows in a very narrow ravine that is as narrow as a goat’s leap and hence the name Mekedatu (‘Meke’ means goat in Kannada and ‘Datu’ means crossover).