Home » News » No going back on my promise of farm loan waiver: CM H.D. Kumaraswamy 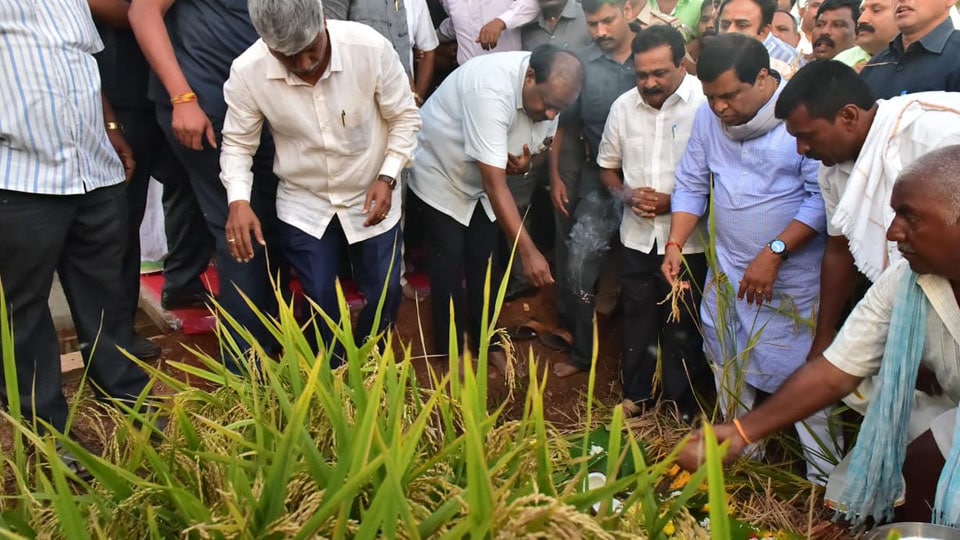 No going back on my promise of farm loan waiver: CM H.D. Kumaraswamy

Mandya : Maintaining that he has been working on farm loan waiver scheme for over six-months, Chief Minister H.D. Kumaraswamy (HDK) has said that he will not go back on his promise of farm loan waiver. Addressing the gathering at Sitapura in Pandavapura on Friday, the CM said that the farm loan waiver amounts to Rs.46,000 crore.

Announcing that he will start distributing debt-free certificates to farmers of Doddaballapur and Sedam taluks on Saturday (Dec.8), whose loans have been waived off, Kumaraswamy said that 2.80 lakh families, who have non-performing assets and 41.20 lakh families who have borrowed between Rs.50,000 and Rs.3 lakh, will be considered for loan waiver.

Continuing, the CM said that the Government will open Paddy Procurement Centres.

Pointing out that the centre has fixed Rs.1,750 MSP (per quintal) for paddy, Kumaraswamy said that the State Government would pay Rs.100 more per quintal.

The CM distributed cheques for Rs.5 lakh each to the kin of victims of Kanaganamaradi bus tragedy which claimed 30 lives, when a private bus plunged into Varuna Canal at Kanaganamaradi in Pandavapura taluk on Nov.24.

The CM landed at KRS helipad and reached Sitapura village, where he was given a rousing reception. He was taken in a procession in a decorated bullock cart for over half a kilometre on a mud road that was decorated with buntings, flowers and rangolis.

Accompanied by more than 40 farmers and labourers, Kumaraswamy performed puja in front of a heap of more than 100 quintals of paddy that was decked up with flowers.

The CM had transplanted paddy at a farm in Sitapura on Aug.11, with the KRS full to the brim after a gap of over four years.

Observing that tragedies such as the Kanaganamaradi bus accident would not have occurred if there were parapet walls or barriers on either side of irrigation Canals, the CM said that the Government has understood the severity of the issue and appropriate measures will be taken to prevent mishaps.

Sips tea at petty stall: Kumaraswamy stopped by a roadside petty shop at Aralakuppe in Pandavapura to have tea and vada.

During his brief stop-over at the petty shop, the CM held talks with the villagers. Later, the CM laid the foundation stone for a bridge across Cauvery, that will connect Mysuru and Aralakuppe.

The bridge, estimated to cost Rs.78 crore, will reduce the distance between Mysuru and Aralakuppe by nearly 15 kms.