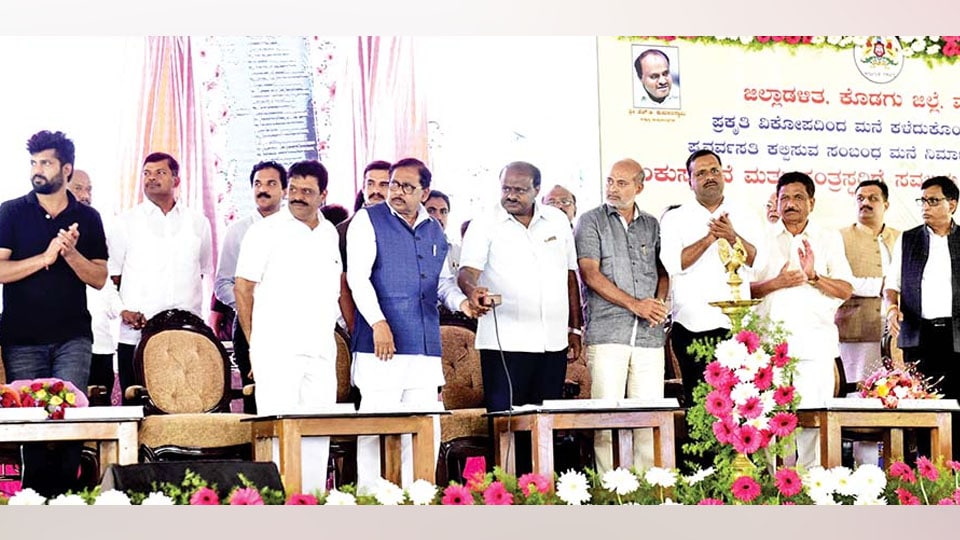 Madikeri:  Chief Minister H.D. Kumaraswamy (HDK) yesterday laid the foundation stone for the construction of houses on a 50-acre plot at Jamboor village near Madapura in the district. The foundation stone was symbolically laid in an e-way by pressing a remote-controlled button. Later, a physical foundation laying ceremony was also held where priests performed rituals.

Each house will be built at a cost of Rs.9.80 lakh. The CM also made an announcement on the setting up of the Kodagu Reconstruction, Rehabilitation and Development Authority, of which he is the Chairman. It will carry out reconstruction and rehabilitation work and restoring the flood-ravaged district.

In his address, Kumaraswamy lauded the courage displayed by the people of Kodagu during floods and landslips. He offered all help from the Government to those displaced and affected by the unprecedented calamity.

MP takes objection: Deputy Chief Minister Dr. G. Parameshwara said there was no dearth of funds with the Government for offering succour to the affected. The lost charm of the district following the floods and landslips would be restored, he added. “The Centre has not released any special aid to flood-ravaged Kodagu,” he alleged.

Mysuru-Kodagu MP Pratap Simha took exception to Dr. Parameshwara’s comment in his speech and argued that the Centre has also responded positively to the flood-hit district.

Objecting to the Dy.CM’s remark that the Centre should have announced a special package for Kodagu like it did for Kerala, Simha said, the Centre did not announce any package to Kerala but released funds under National Disaster Response Fund (NDRF). Also, the Highways in Kodagu were being repaired and reconstructed from the Central grant, he maintained.

War of words: Displaying a letter on the Centre’s aid to the State which was also acknowledged by the Chief Minister, Pratap Simha said that like in a school admission process where the names of the child’s father and mother are mentioned, the State has to acknowledge Centre’s contribution. This comment irritated Kumaraswamy and he chided the MP for his remarks. A war of words ensued between them for some moments. Speaking on the occasion, HDK said that Rs.85 crore has been released for rehabilitation works in the first phase in Kodagu besides Rs.45 crore for the road works by PWD. He said, the State Govt. for the first time has paid Rs.50,000 directly to the persons who have lost their house articles.

Rs.180 crore received so far: He said that so far Rs.180 crore has been received from the donors including Rs.103 crore from Government employees. The funds will be utilised for the reconstruction and rehabilitation works for the Kodagu. Infosys Foundation has come forward to construct 250 houses. He said that the District Administration should spare 1.5 acres of land to Chamundeswari Electric Supply Company for construction of a Sub-Station for the new houses.

Referring to Union Government funds for reconstruction and rehabilitation works in Kodagu, he said that the Centre has sanctioned Rs.546 crore which is not only for the Kodagu but also eight districts in the State where the natural calamity occurred.

Minister for Housing and Urban Development U.T. Khader said, construction of houses for the families would start from Saturday (Dec.8) at Jamboor. Around 55 houses would be built in one month in the respective colonies.

housing project Kodagu
No going back on my promise of farm loan waiver: CM H.D. Kumaraswamy
Massive protest in Madikeri held to Save River Cauvery