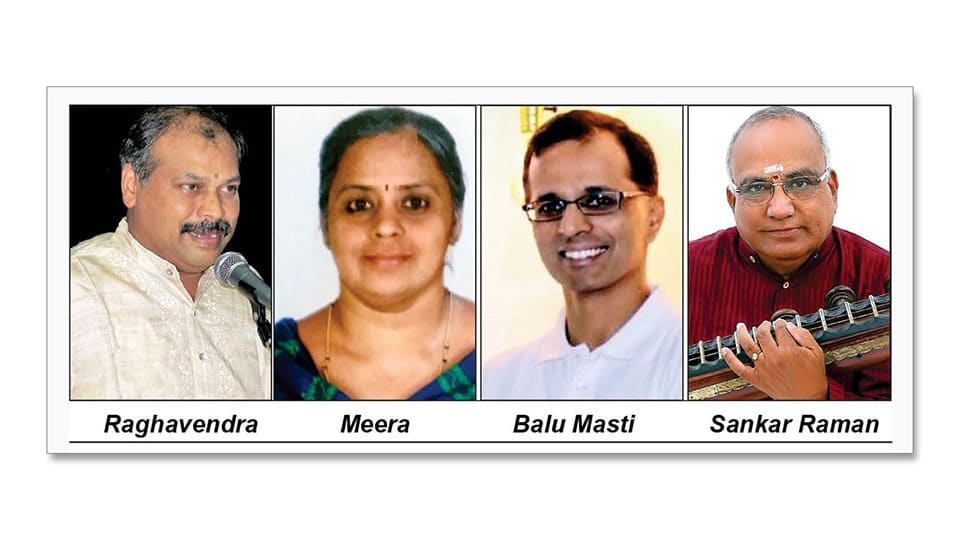 Conferring of ‘Vainika Brahma’ title on Vid. A. Sankar Raman

On Oct.27 at 6 pm, seasoned vocalist Vid.Bellary M. Raghavendra is going to give a vocal concert under the aegis of Nadabrahma Sangeetha Sabha at K. Vasudevacharya Bhavan on JLB Road, Mysuru. He will be accompanied by Mysore M. Nagaraj on violin, Tumkur B. Ravishankar on mridanga and G. Guruprasanna on khanjira for the endowment programme Smt.Bhagirati and Kuskoor Krishna Murthy Memorial Concert.

Bellary M. Raghavendra is a Karnatak vocalist. He has a Master’s degree in Music from Bangalore University. He  has worked as a Programme Executive in All India Radio (AIR).

His father, Vid. Bellary M. Venkateshachar is a Karnatak classical vocalist and his uncle Bellary M. Sheshagiri Achar was a Vaggeyakara. They were popularly known as ‘Bellary Brothers.’

Raghavendra`s initial training was under the tutelage of his uncle Bellary M. Sheshagiri Achar. He was also greatly influenced by his father Bellary M. Venkateshachar.

Raghavendra started giving stage performances at a very young age of nine years. Raghavendra has produced many music-based programmes such as Aaswaada (on music appreciation), Swarasangama (on teaching music) and many other musical features, which are highly popular among the music-lovers and general public.

Raghavendra is a dedicated music teacher who has a rare ability to identify and groom music students based on their individual strengths. In addition to being a vocalist, he is well-versed in Konnakol and Morching. He has learnt Hindustani music and also performed jugalbandis with eminent Hindustani vocalists. He has toured Europe and Canada along with TAS Mani Ensemble.

The concert is Sponsored by  K.V. Murthy, brothers and sisters.

On Oct.28, a day-long programme ‘Vainika Vaibhava’ has been organised as part of the 98th birth anniversary of Sangeeta Kalanidhi Padma Bhushan Mysore V. Doreswamy Iyengar. 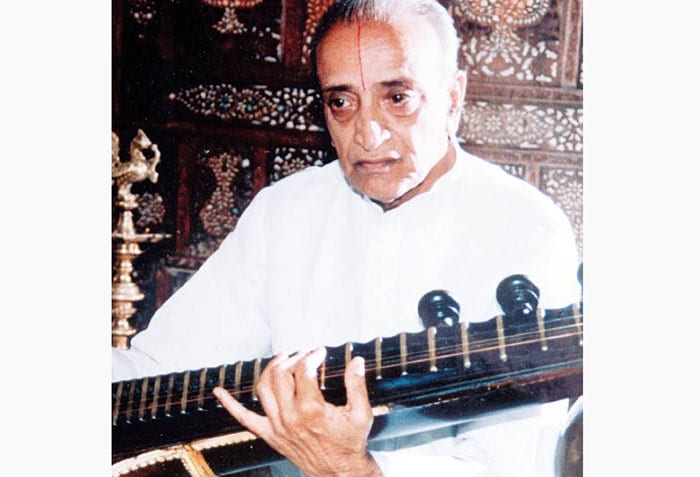 D. Balakrishna and S. Rama Prasad will inaugurate the programme at 10 am, which will be followed by a veena concert by Meera Manjunath, accompanied by Sai Shiva Lakshmi Keshava on mridanga and S. Manjunath on ghata.

Meera Manjunath started music lessons at a very young age of six from late A.V. Prakash for both veena and vocal. Subsequently learnt Veena for over 15 years under late M.J. Srinivas Iyengar and now under Mysore S. Rajalakshmi. She continued her vocal lessons under Dr. Sukanya Prabhakar. She is a rank holder in M.Mus and a graded artiste of AIR. She has performed in many Sabhas. She is an active member of Surabhi Gana Kala Mandira for all their creative productions. She is also training a lot of students in Music.

At 11 am, nuances of Gamakas in veena through a concert by Balu Masti Sai Shiva. He will be accompanied by Sai Shiva Lakshmi Keshava on mridanga and S. Manjunath on ghata.

Balu Masti is a Karnatak veena artiste from a young age which helped him to be a student of the year and go very strong on academics as well. Balu started his music under late A.V. Prakash, a well-known flautist.

Subsequently, he has learnt under Jayanti Kumaresh. Balu  serves as Vice-President of Engineering & Global Business Development at Vigyanlabs Innovations Private Limited. He has vast  experience working on cutting edge technology projects in leading Multinational Companies and start-ups in USA and India for 20+ years. Balu, along with his vocation, has given concerts and lec-dems across the globe. Balu, a multifaceted personality, is a professional photographer, as well as a certified Yoga teacher who is spreading yoga in a big way.

At 5.30 pm, conferring  of ‘Vainika Brahma’ title on Vid. A. Sankar Raman followed by a veena concert. C. Cheluvaraju on mridanga and Gurumurthy on ghata  will be the accompanists.

Vid. Shankar Raman from very young age has shown deep interest in music which naturally came to him from his mother Meenakshi Narayanan who herself was an accomplished veena player.

He considers himself to be  fortunate to come under the tutelage of Indian top ranking veena artiste Rajeswari Padmanabhan of Tamil Nadu and since past 40 years, he was under the constant guidance of his Guru with whom he has also shared the dais on many occasions. Strict adherence to classical form of music, rich tradition backed up by nine generation of veena players of Karaikudi style of veena playing.

Beside being a naturally gifted veena player, his deep love for music has prompted him to leave a job in a leading industry.

His veena programmes has been well-received and appreciated and he has performed extensively in Bengaluru, Chennai and many places in India and abroad.

Having passed ‘Vidwat’ in veena conducted by Karnataka Secondary Education Examination Board, he also trains many young students in veena. He has lent veena support to leading dancers in Karnataka and is much sought-after artiste. His lecture-demonstration on veena has been widely appreciated by many western audience for whom he has performed exclusively on various occasions.

He was recognised as the ‘Artiste of the Year’ in 2008 by Karnataka Ganakala Parishad and many titles were conferred on him from recognised Sabhas.

The day-long event is an endowment by family & well-wishers convened by S. Rama Prasad