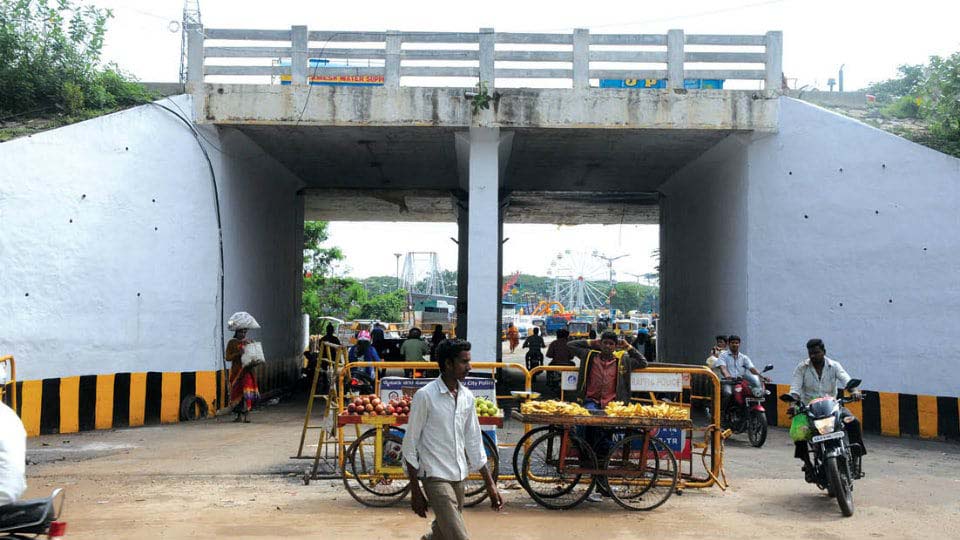 Mysuru:  The Probe Committee which was constituted by the Mysuru City Corporation (MCC) in connection with MG Road Double Billing Scam where Rs.1.4 crore was allegedly siphoned off by submitting two bills for the same work has submitted its report to the government for appropriate action against the guilty officers.

The complainant in this case is Council Opposition Leader B.V. Manjunath against MCC Assistant Executive Engineer Sunil Babu, MCC Zone-1 Office Junior Engineer M.N. Mohanakumari and Contractor Karigowda who are in the dock for alleged misappropriation. The issue was raised by Manjunath at the Council meeting on Jan. 29.

MCC Zone 1 received Rs. 4 crore under the MCC SFC Special Grants of Rs. 50 crore. The Corporation took development of road and drains of NH 212 near Mahatma Gandhi Road via Agrahara Circle and invited the tender. Civil Contractor Karigowda won the bid for Rs. 3.21 crore to complete the works in three phases.  The first and second phase of the works was completed for Rs. 2.28 crore. The Probe Committee found that in the third bill there is a discrepancy of more than Rs. 1.40 crore.

The 10-member Probe Committee headed by Mayor Pushpalatha Jagannath examined the documents and also conducted spot inspection thrice. The Committee submitted a report to the government on Mar. 8. In its 28-page report, the Committee has stated that a bill of Rs. 1,33,57,353 was sanctioned to contractor Karigowda who did not even take up road repair works.

The Committee found that Sunil Babu and M.N. Mohanakumari guilty of sanctioning the money and has recommended disciplinary action against them and also recommended a larger investigation into the scam. The report has mentioned that when the works report was submitted by the guilty officers to Superintendent Engineer, the officers had told him that a note (file notings) containing the observations of the works might fall off.

Committee investigation revealed that to hide the misappropriation, the officers had torn off a note from the report and to cover it up, they had told the Superintendent Engineer that the note would fall off to create an impression that the note has really fallen off. In the page that was torn off, there are observations noted by Auditor, Accounts Officer and Chief Accounts Officer, the Committee noted.

While the Committee has recommended the government to file a Police complaint against the guilty officers, it has expressed surprise that none of the higher officers including the then Deputy Commissioner (Development) G.R. Suresh detected the scam. The Committee observed that Suresh’s move of not inspecting the road works after the work completion report was submitted raised suspicion.

On contractor Karigowda, the Committee has observed that he has already pocketed Rs. 1 crore under different heads and double billing and as such he must be blacklisted and all other pending bills must not be sanctioned. Legal action must be initiated against him and he must be made to refund the money that he has taken for the works that were not initiated.

The Committee found that third party consultant CADD Station Solutions Pvt. Limited being hand-in-glove with the contractor and the guilty officers. As a consultant, CADD Station must have spotted the irregularities and alerted the MCC higher-ups. As claimed in the work completion report, interlocks were not used in the footpath works on MG Road.

While submitting the completion report, photographs of the works taken up in Ward 47 were attached and it was claimed that the photos were of MG Road. For this intentional lapse, CADD Station must be blacklisted and the tenders issued to it must be cancelled, the Committee observed.

In the checklist attached with the bills, though there are signatures of Junior Engineer, Development Officers, Zonal Commissioner, Executive Engineer (Civil-West), Deputy Commissioner (Development), Auditor, Accounts Officer and Chief Accounts Officer, they have not mentioned the dates on which they have signed. This leads to a lot of suspicion, the Committee observed.

While issuing work order to the contractor, bank guarantee has not been procured as per norms and despite this, the bills have been sanctioned. The committee felt that the entire Rs. 4 crore project under the MCC SFC Special Grants of Rs. 50 crore must be probed along with the works taken up with the remaining Rs. 46 crore funds. An independent investigation agency must probe the irregularities into the entire works that have been taken up under SFC grants, the Committee has suggested.