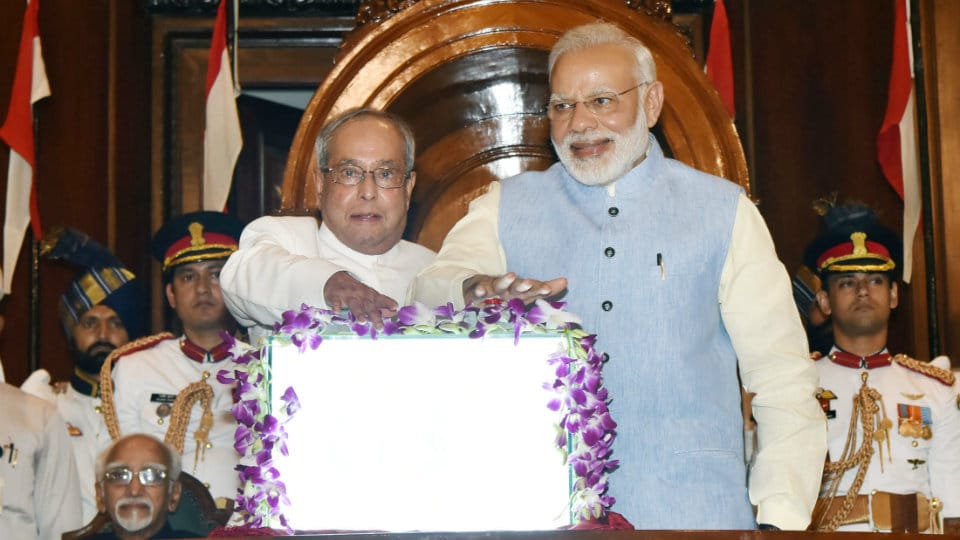 India will awaken to limitless possibilities as its tryst with GST begins at midnight, said Union Finance Minister Arun Jaitley, in his opening remarks. The implementation of Goods and Services Tax is a historic occasion and watching it unfold on television channels, as the length and breadth of country will be united, was indeed a heart-warming experience.

Jaitley, who began his remarks in English then switched over to Hindi. He gave a gist of what GST was all about and acknowledged the presence of former Finance Minister Yashwant Sinha during the NDA Government of Vajpayee, who of late has been vocal in his criticism of the Government.

Declaring GST as a game-changer, he said that while old India was economically fragmented, the new India is a one nation, one tax country. He spoke for about 20 minutes and every time he spoke something important there was thumping of desks (an old British Parliament practice!).

Then it was the turn of Prime Minister Narendra Modi, who as usual spoke in Hindi, recalled the tryst with destiny’s first date when the first meeting of the Constituent Assembly took place in the very Constitution Hall on December 9, 1946. The second meeting was on the midnight of August 14-15, 1947 when the first Prime Minister Jawaharlal Nehru’s famous “Tryst with Destiny,” speech was made. The third meeting Modi recalled was of November 26, 1949 when the Constitution was adopted.

Modi also recalled the debate and discussions that went on during the making of the Constitution in which the ‘best brains’ with different ideologies participated and framed the Constitution.

Invoking the Bhagavad Gita, Modi said that just as Gita had 18 chapters the GST Council had held 18 meetings. Even as the Prime Minister was speaking, India Today channel had the footage of the first Prime Minister Jawaharlal Nehru entering the Constitution Hall to deliver his famous speech on August 15, 1947, alongside.

Extolling the virtues of GST, Modi said that GST means ‘Good and Simple Tax.’ He spoke for 20 minutes.

President Pranab Mukherjee, who spoke in English, recalled his life and times as Union Finance Minister and said that GST was truly a breathtaking reform and added that it was in 2006-07 that he had interaction with Empowered Committee. 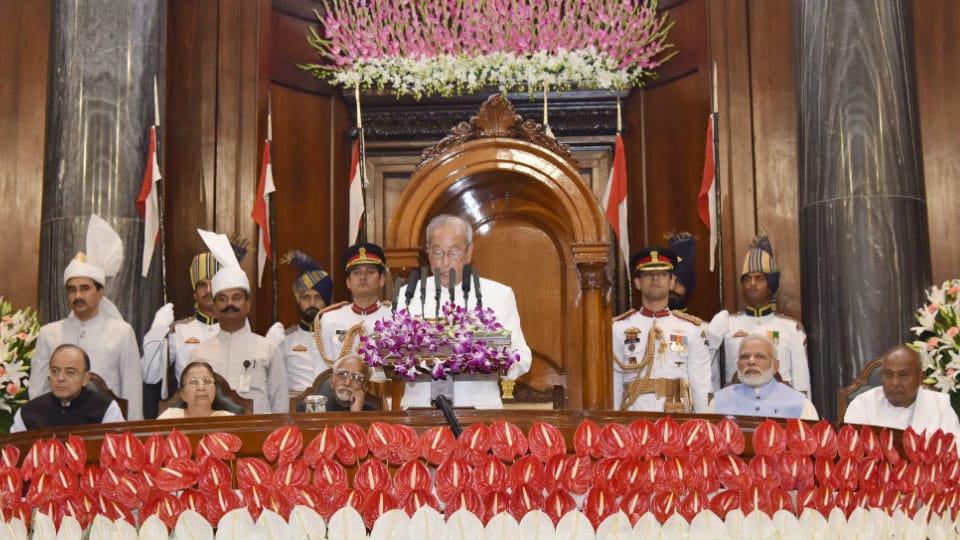 Recalling the contribution of Nandan Nilekani, who came up with technical infrastructure, he said that to implement GST, world class technology was needed. The President also said that GST is a disruptive change similar to VAT when it was introduced. He also spoke for 20 minutes. He also recalled the time when he had met Chief Ministers of various States (indirectly referring to the then Chief Minister of Gujarat who happened to be Narendra Modi, who had opposed the GST then).

The Central Hall (earlier the Constitution Hall) of the Parliament was full with hardly a vacant chair. There were one or two well-known faces from the silver screen who are now MPs. There was Hema Malini and as the cameras panned on her, she was trying to stifle a yawn. The flamboyant Shatrughan Sinha was also there. Varun Gandhi was discussing something animatedly even as his cousin Rahul Gandhi was away in Italy holidaying. Former Prime Minister H.D. Deve Gowda as protocol demanded enjoyed the pride of  place sitting next to Prime Minister Modi. The six who sat together facing the people included Finance Minister Arun Jaitley, Speaker Sumitra Mahajan, Vice-President Hamid Ansari, President Pranab Mukherjee, PM Modi and former PM Deve Gowda.

READ ALSO  Mahatma follower at the helm of Mahajana

As the clock struck 12, the President ended his speech and immediately he and Modi pressed the button to herald the GST at the stroke of midnight. The historic session ended with shouts of Bharat Mata ki Jai.