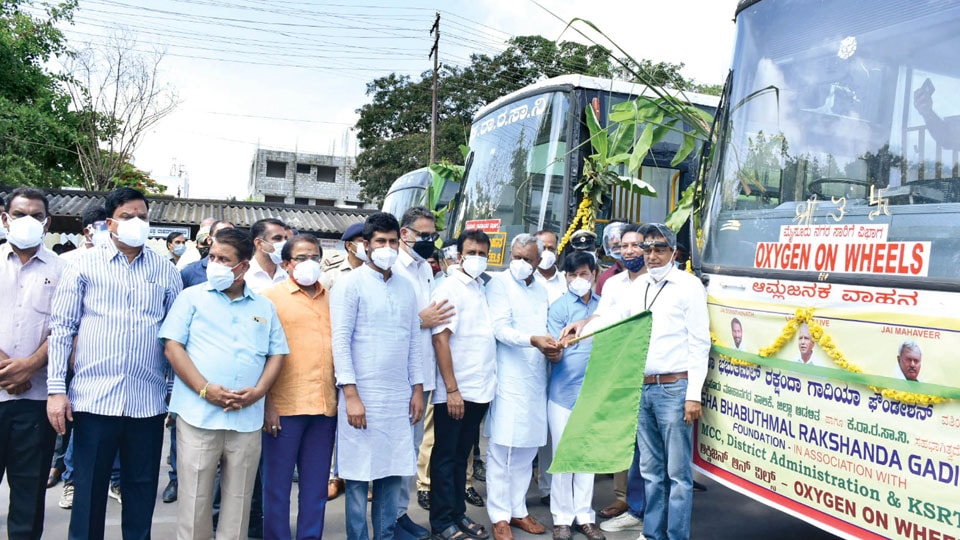 Mysore/Mysuru: Co-operation and District in-Charge Minister S.T. Somashekar inaugurated four Oxygen Buses, on the concept of ‘Oxygen on Wheels’ with a view to provide the much-needed oxygen to Corona Positive patients during transit, at KSRTC Bus Depot in Bannimantap here this morning.

These buses have been sponsored by Gadiya Family of Mysuru, under the aegis of Sha Bhabuthmal Rakshanda Gadiya Foundation, in association with Mysuru City Corporation (MCC), District Administration and Karnataka State Road Transport Corporation (KSRTC).

Mahaveer and Dileep of the Foundation have spent Rs. 1.10 lakh on each bus to provide equipment such as jumbo cylinders with the oxygen masks, two oxygen concentrators. In total, four such KSRTC buses have been readied for the sake of Corona patients. The duo have also provided doctors and nurses for each bus.

These customised OxyBuses are fitted with oxygen cylinders and concentrators to support COVID patients who are not able to get oxygen beds and are waiting outside the hospitals. At one time, eight persons can take oxygen in each bus. A bed has been provided in each bus to treat patient in case of emergency. Dedicated nurses will take care of the patients who are in need of oxygen. Patients can utilise this facility, which is free of cost, until they are able to secure admission in the hospital.

These buses will be stationed outside various hospitals in city and taluks depending upon the need. The places for stationing them will be decided soon.

Above facility will be monitored by the District COVID War Room.

READ ALSO  Action against those who attack doctors, Police: DC

Speaking after the launch, District Minister Somashekar thanked the Foundation for sponsoring four buses fitted with jumbo oxygen cylinders and opined that it was possible to defeat the pandemic with the help of everyone.

Stating that when ‘Oxygen on Wheels’ facility was launched in Bengaluru recently, he had requested Transport Minister Laxman Savadi to provide similar facility for Mysuru, the District Minister said it was happy to note that the Sha Bhabuthmal Rakshanda Gadiya Foundation has spent Rs. 4.40 lakh on providing medical equipment for four buses.

The Minister expressed his concern over increase in the number of Black Fungus cases in the district and also ruled out the shortage of medicine to treat this disease. Each patient needs to be given 21 injections which included six at a time and the State Government has supplied the sufficient quantity of injection to the district, he added.