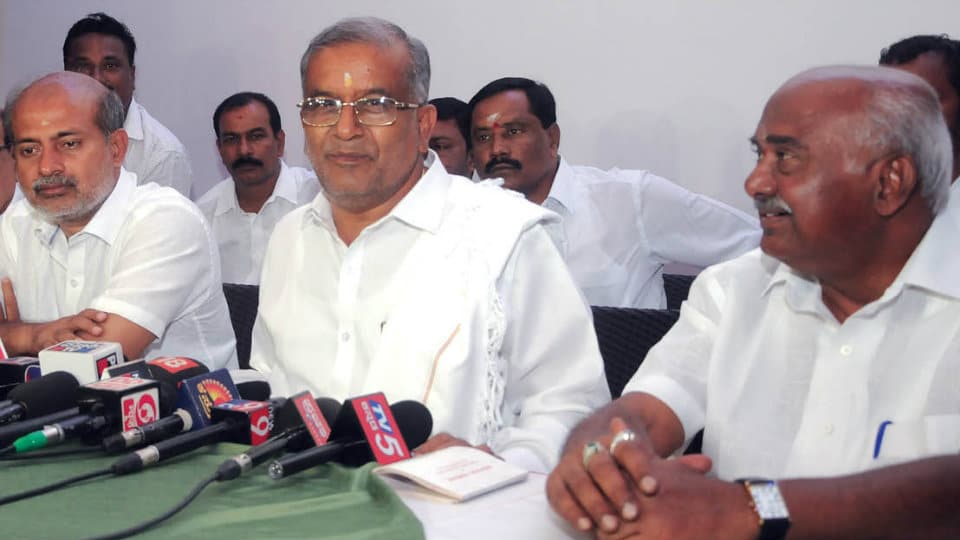 Mysuru: “There is no question of my ever joining Congress party. There is absolutely no truth in the reports that ahead of the ensuing 2018 Assembly elections I would join Congress party. It is an utter lie and a tendentious, mischievous report spread by the Congress afraid of my strength in Chamundeshwari Constituency,” said MLA G.T. Devegowda.

Addressing press persons at a private hotel in city this morning, G.T. Devegowda accused CM Siddharamaiah of spreading false rumours of him joining the Congress and added that he was firm at contesting on a JD(S) ticket from Chamundeshwari.

Stating that H.D. Deve Gowda was his national leader and H.D. Kumaraswamy his State leader, the MLA said that elected JD(S) representatives would strive hard to defeat the Congress.

Devegowda also mentioned that the Kuruba community was upset with Siddharamaiah for not making Beerihundi Basavanna as the Mysuru ZP President.

Accusing Siddharamaiah of using former Minister A.H. Vishwanath to connect with Congress President Sonia Gandhi, Devegowda said that the CM had neglected Vishwanath by not visiting him even once when he was hospitalised.

Stating that Chamundeshwari Constituency was JD(S) fortress, Devegowda questioned CM’s contribution in the development of Chamumdeshwari and Varuna constituencies. He also asked the CM to bring out a White Paper with respect to development works in both constituencies.

Former Minister A.H. Vishwanath said that he was ready to fight against any Congress leader.

Questioning Siddharamaiah’s contribution to Kuruba community, he said that CM had only been misleading the community and added that development works in industrial  and education sectors had come to a standstill under Siddharamaiah’s rule.