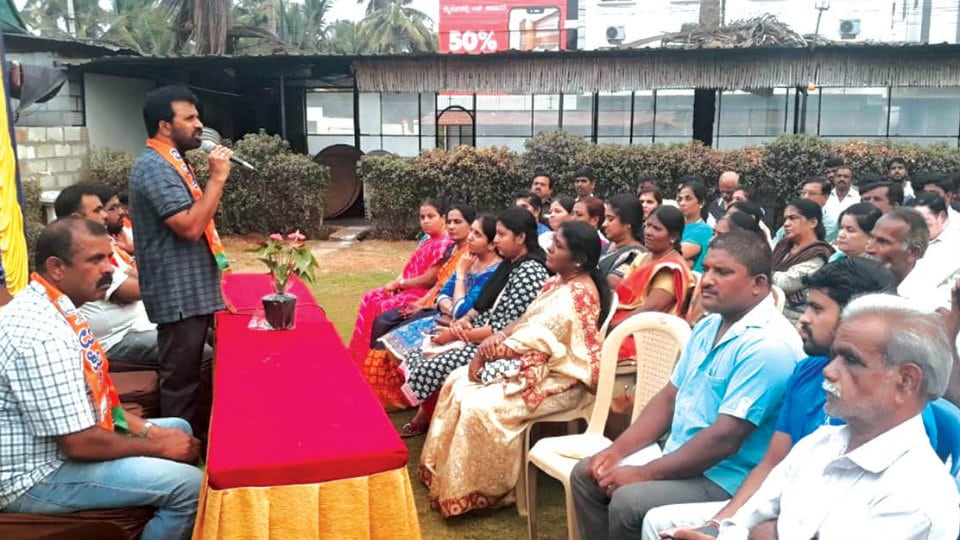 Mysuru:  Claiming that there was no guarantee of JD(S)-Congress workers getting united in the wake of seat-sharing pact between the two parties in the State,  Chamaraja BJP MLA L. Nagendra has said that this situation was certainly going to help the BJP in the LS polls.

Addressing a meeting of party workers from MCC Ward Nos 1, 2, 3, 4, 5 and 20 at a private hotel here on Wednesday, Nagendra alleged that the JD(S)-Congress have aligned only for the sake of power and JD(S) and Congress workers were fighting each other in their strongholds.

Maintaining that the Congress workers in Mandya will not support JD(S) candidate Nikhil Kumaraswamy, the MLA said that there were many confusions in the Coalition Government and this will be very much advantageous to the BJP.

Stating that the BJP will win more than 300 LS seats this time, Nagendra expressed confidence that BJP candidate will secure more than one lakh votes in Chamaraja Assembly  segment alone.

Pointing out Booth Committees will be further strengthened in the run-up to the polls, Nagendra maintained that party workers were like brothers and they were toiling hard day and night to ensure BJP victory in the LS polls.

Corporator M.U. Subbaiah, leaders Mahadevappa, Jayappa, Vaneesh and others were present during the meeting.