Mysuru: The pathetic condition of the State-run Cheluvamba Hospital has shocked many elected representatives and Ministers who came there on surprise visits in the past. Today it was the turn of newly-elected Chamaraja MLA L. Nagendra to be shocked by the appalling condition of the Hospital and the way it is run.

After his visit, the MLA had only one request to the State Government: “I would plead before Chief Minister H.D. Kumaraswamy and Health Minister Shivananda Patil to visit the Cheluvamba Hospital and save hundreds of women patients from the inhumane way they are being treated.”

Nagendra paid a surprise visit to the Hospital this morning following a report published in Star of Mysore yesterday (June 18) under the title “Cheluvamba Hospital faces ‘bed trouble’ even as it sees rise in maternity cases.” The MLA witnessed many women sleeping on the floor along with their crying babies.

He was shocked to see that many corridors have been converted into make-shift maternity wards where sleeping patients, ward attendants, nurses and doctors jostle for space. The MLA was accompanied by Resident Medical Officer (RMO) Gangamma in the absence of Medical Superintendent Radhamani.

Many patients told the MLA that they were forced to sleep on the floor in biting cold and their feet turn numb in the morning. “We have come from far off places like Hunsur, H.D. Kote and Chamarajanagar and we were told to sleep on the floor along with our babies as there is shortage of beds,” a woman told MLA Nagendra. 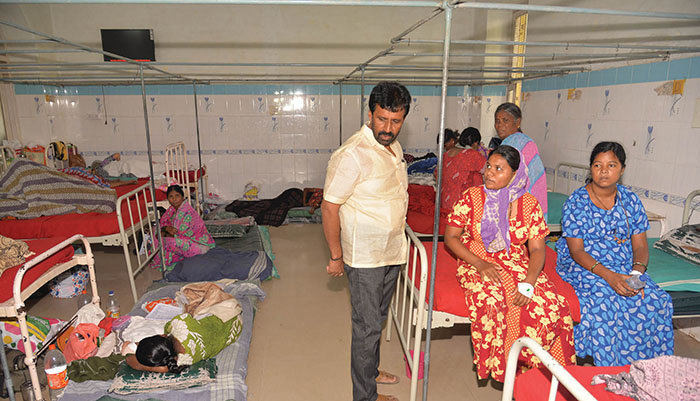 Another woman patient told the MLA that she gave birth only yesterday and was forced to sleep on the corridor with her new-born baby today. When Nagendra questioned Gangamma about this, she said that the State government was sitting on a proposal to increase the bed strength though it was sent months ago.

The RMO fumbled for words when the MLA pointed at some empty beds lying in wards. He asked her to make arrangements for the patients on the empty beds. Gangamma told the MLA that the pressure on Cheluvamba Hospital will ease after the Jayadeva Hospital that is at present functioning at K.R. Hospital premises shifts to its new location at Metagalli.

Following a series of complaints from patients about squalid condition of toilets in many sections, MLA L. Nagendra visited some of them and he cringed when he found huge rodents inside the toilets. He then told the hospital authorities that the least they could do was to ensure that rodents are killed and ensure that there is enough water supply to the toilets.

The MLA later found a long queue of neo-natal mothers in front of the vaccination section. He was told that the mothers have lined up to get their babies vaccinated. Nagendra suggested that instead of neo-natal mothers waiting in tiring queues, they can be attended on their beds itself.

Later speaking to reporters, the MLA said that the pathetic condition of Cheluvamba Hospital speaks volumes about the way the State Government’s health policies are implemented.