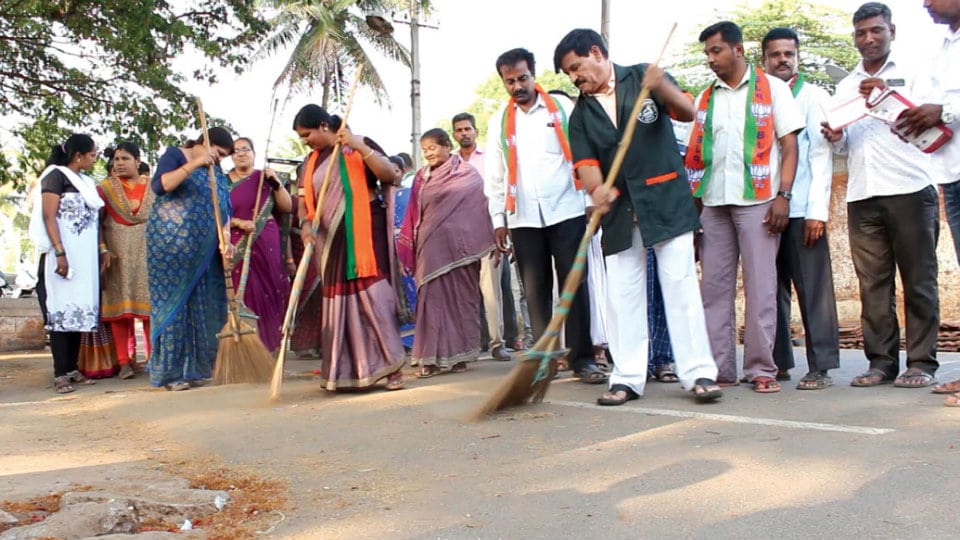 Ramdas hailed Narendra Modi as the only Prime Minister in the world who had washed the feet of a civic worker and appealed to the voters to vote for BJP.

Speaking further, the MLA said that Swachh Bharat Abhiyan had created a good awareness among people across India on cleanliness. He observed that Devaraja Urs Colony had seen a good level of development over the years and added that problems associated with Excel Waste Treatment Plant would be completely addressed in phases.

Corporators Shanthamma Vadivelu, Noor Fathima and others joined the MLA.

Meanwhile, all eyes are set on the Maharaja’s College Grounds where a bhoomi puja was performed to set up the stage for the mega BJP rally to be addressed by Prime Minister Narendra Modi on Apr.8 or 9. The BJP leaders performed the puja  on Wednesday evening. Later, speaking, Ramdas said that Modi was visiting the State next week for election campaign. MLA L. Nagendra, BJP leaders H.V. Rajeev, Vamanacharya, B.P. Manjunath, Siddaraju, Phaneesh, Sandesh Swamy and others were present.