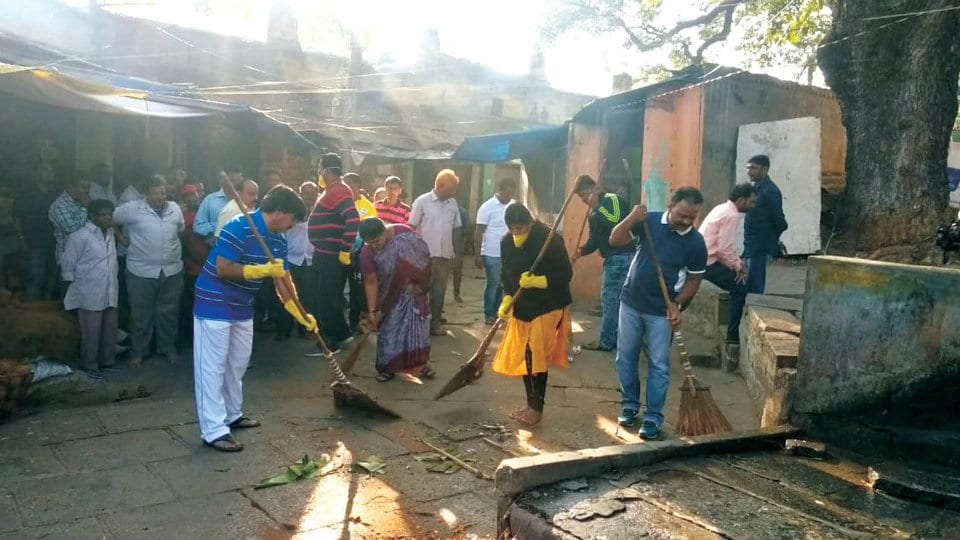 Mysuru:  Continuing his cleanliness drives across his constituency, MLA S.A. Ramdas took up cleaning in the areas coming under MCC Ward No.49 of KR constituency on Sunday besides creating awareness on the importance on cleanliness.

Ramdas, who took up the broom along with Pourakarmikas, volunteers, members of various organisations and the residents, conducted cleaning at Agrahara Circle, Vani Vilas Market, Madhvachar  Road, Nanjumalige Circle and surrounding places. He urged the residents to segregate dry and wet waste at their houses itself and place them separately in the bins which would be helpful in keeping the city clean. After seeing the garbage near the shops, Ramdas instructed the MCC Health Officer to issue notices to them.

During his visit to Vani Vilas Market, Ramdas, who saw uncleared vegetable waste there questioned the MCC officials as to why the garbage was not being cleared and instructed them to get the waste cleared immediately and regularly besides asking the officials to collect money from the tenants of the market and take care of cleanliness.

Ramdas said that as the entrance arch to Vani Vilas Market is dilapidated, the gates have been closed resulting in very less people coming to this market. He further said that this problem should be solved immediately and the officials should prepare a list of legal and illegal tenants in the market. A meeting with tenants has been called on Nov.17 in CADA premises to discuss about the development of the market and after tenants decide at the meeting, he would discuss the same with the MCC Commissioner on Nov.19.

Following complaints of footpath encroachment by vendors selling fast food, fish, tea on push carts, Ramdas, who inspected Madhvachar Road, instructed the officials to clear the footpaths for pedestrians’ use.

Launches Agnihotra: In a bid to protect the health of the people and develop immunity and resistance to fight diseases, Agnihotra programme, consisting of 50 families, was launched which will be performed during sunrise and sunset, said MLA Ramdas.

He further said that this was being held to make KR constituency a healthy constituency and added that talks have been held with the AYUSH Department to conduct health check-up cams at all Wards coming under KR constituency beginning with children to senior citizens. Instructions have been given to treat them only through Agnihotra, he said.