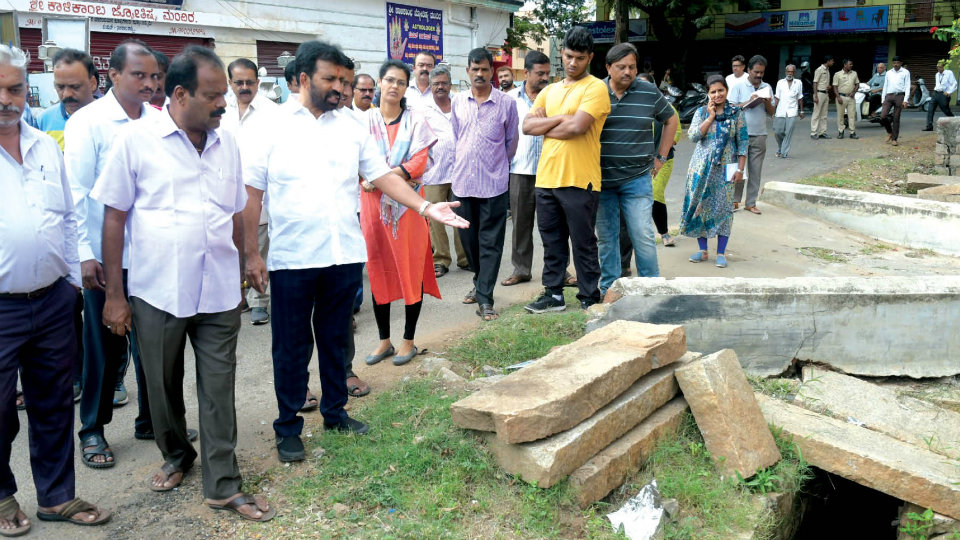 MLA takes out Padayatra in Saraswathipuram

Mysore: Various residents filed complaints of contaminated tap water, drunkards creating nuisance in parks and other civic problems during ‘padayatra’ undertaken by Chamaraja MLA Nagendra at Ward No.42 Saraswathipuram in his Assembly segment in city on Thursday.

The MLA, during his padayatra, inspected various streets along with many officials of Mysuru City Corporation (MCC) and elected representatives in the Ward. He directed the officials to solve the problems on the spot after receiving the complaints from public.

During his visit to 2nd Cross in Saraswathipuram First Main Road, residents demanded the MLA to remove old and under-repair bus which has been parked on roadside from the last 15 years. The MLA responded to these woes immediately and instructed the Police officials to shift this bus to alternate spot and report him immediately after this work. He also asked the CESC officials to remove the old rusted electric power supply box installed to borewell switch motor in 3rd Cross, 16th Main of Saraswathipuram.

The MLA also ordered the Police officials to close the roadside fast food shops on 1st Main Road by 9 pm. He also wanted Police to take measures with regard to parking the vehicles on one side of the road instead of both the sides of this Main Road as it is causing a lot of inconvenience for public movement.

On seeing the empty beer beetles, firewood found dumped on 5th Cross on 1st Main Road behind Hanumanthu Hotel, MCC Health Officer Dr. D.G. Nagaraj penalised the owner of this hotel for encroaching the footpath and imposed a penalty of Rs.One thousand for dumping firewood.

When residents of 5th Cross in 4th Main brought the complaint of drunkards creating menace in various parks in their area, the MLA instructed the Police to increase night patrolling and night beat to check such activities in the park.