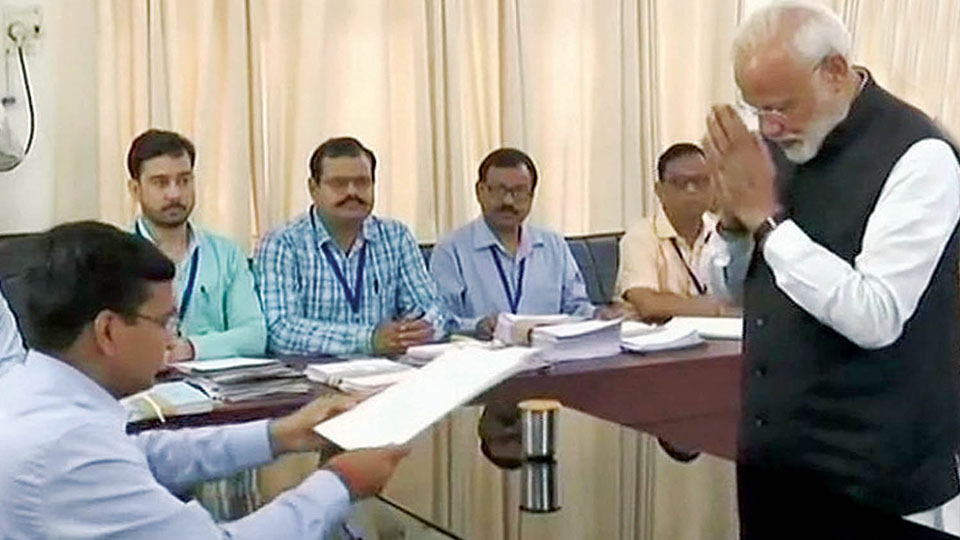 Varanasi: After a massive road show that resembled a sea of saffron through Varanasi and Ganga Aarti, Prime Minister Narendra Modi filed his nomination papers this morning to fight the 2019 Lok Sabha election from the Varanasi Parliamentary seat, the Constituency he won in the 2014 general election by defeating Arvind Kejriwal of Aam Aadmi Party (aap) by a massive margin of 3.37 lakh votes.

Modi filed his nomination at the Collectorate Office at Varanasi, earlier known as Banaras, in Uttar Pradesh, the Constituency that will vote in the seventh phase of the seven-phase elections. District Magistrate Surendra Singh received the papers from the Prime Minister who was dressed in white kurta and his trademark ‘Modi Jacket’. For Modi’s nomination, his proposers included a Chowkidar, the son of Domraja (Doms are those who handle the Hindu last rites, cremation, they are Dalit by caste), an old Sangh worker and the Principal of a Girls Degree College.

In his interaction with party workers, Modi urged them to work hard to create a record margin. Congress has named 2014 candidate Ajay Rai to take on Modi in Varanasi. The PM emphasised that friendship and love are important in politics. These traits are gradually fading away he said. “Party workers are real candidates, the mood is festive from Kashmir to Kanyakumari,” he said.

Yesterday, Modi took part in a grand road show in Varanasi that saw the holy city turn into an ocean of saffron. Frenzied crowds cheered the Prime Minister as he made his way from the statue of Banaras Hindu University founder Madan Mohan Malaviya to the Dashashwamedh Ghat, where Modi took part in the daily Aarti at this ghat on the banks of the river Ganga.

Priyanka Gandhi Vadra has “chickened out” of contest, BJP said yesterday hitting out at Congress for its “juvenile politics” of building up “suspense  for an eventual thriller” but ultimately fielding a “political lightweight” to fight the Prime Minister from Varanasi.

Meanwhile, a group of 50 turmeric farmers from Armoor, Balkonda and other rural areas of Nizamabad district in Telangana came to Varanasi to file nominations as Independent candidates.