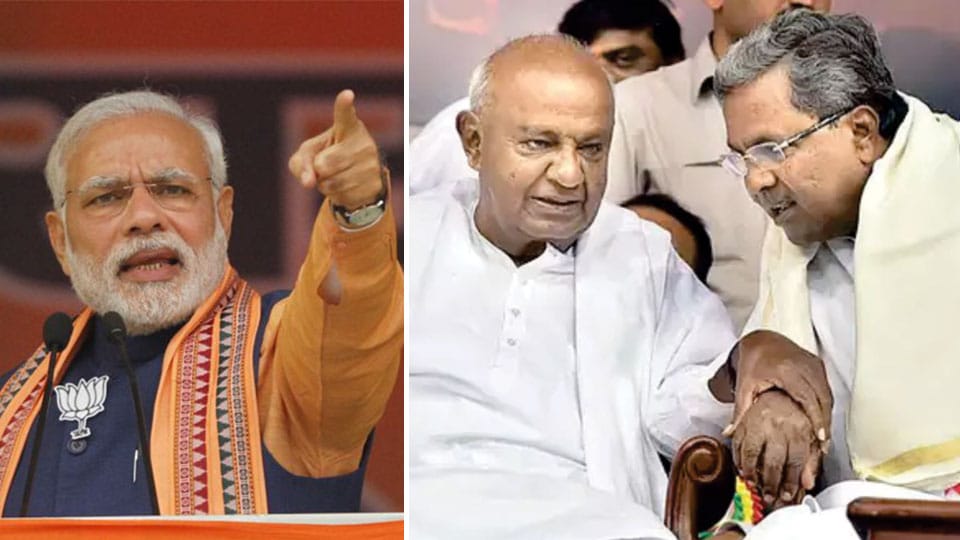 Modi, HDD, Siddu to canvass in Mysuru on Apr.9

Mysuru:  It will be a campaign of titans on Apr.9 as Prime Minister Narendra Modi, JD(S) National President H.D. Deve Gowda and Congress Legislature Party Leader Siddharamaiah are  visiting the city on that day to campaign for their party candidates.

Modi’s visit scheduled on Apr.8 was postponed suddenly to Apr.9 as PM is likely to release his party manifesto in New Delhi on Apr.8.

Former Deputy CM and State BJP leader R. Ashoka, who is overseeing the preparations of Modi’s tour programme in the State, said that Modi will first visit Chitradurga on Apr.9 at 2.15 pm. Later, he will land  in Mysuru at 4 pm to address a rally in city seeking votes for party candidates in Mysuru, Chamarajanagar, Mandya and Hassan.

Addressing a media conference at a private hotel in city this morning, Ashoka termed the pact between Congress and JD(S) fielding candidates in this Lok Sabha polls as a blessing in disguise for BJP to expand its base across the State.

He said many constituencies are witnessing straight fight between BJP and coalition candidates. Upset over the pre-poll pact between Congress and JD(S), some disgruntled party workers have been openly supporting BJP candidates. It is evident that Congress workers are supporting BJP-backed independent candidate Sumalatha Ambarish in Mandya.

Similarly, JD(S) activists are supporting many BJP candidates. Hence, BJP is sure to gain maximum seats, he added.

The  Congress and JD(S) had entered the pact with sole intention of defeating Modi.  However, Modi will come to power again as there a ‘Modi Wave’ across the nation, he said. He said Mysuru-Kodagu candidate Pratap Simha will get elected with a huge margin of votes. Party candidate Pratap Simha, MLAs S.A. Ramdas and L. Nagendra, BJP leaders M. Rajendra, Vamanacharya, Sandesh Swamy, Dr B.H. Manjunath and Kote M. Shivanna were present.