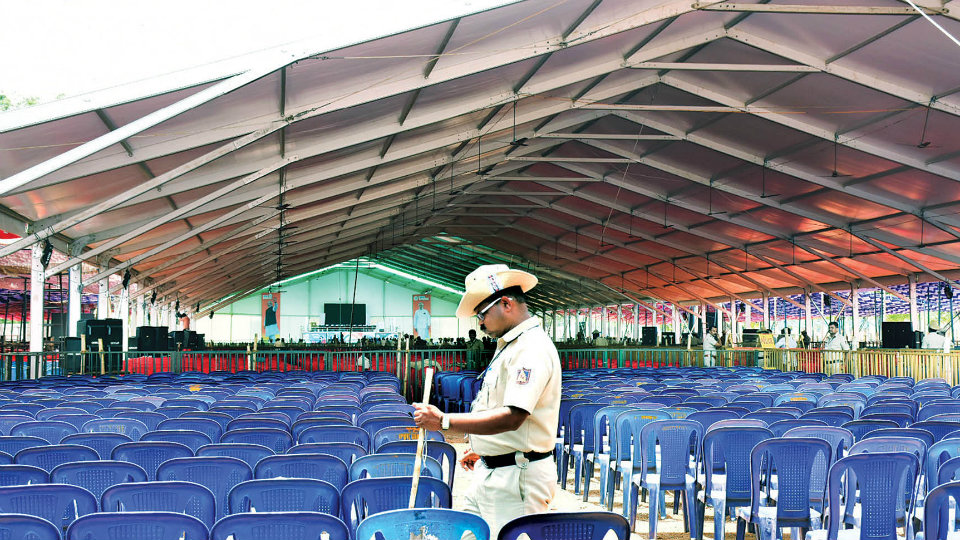 Mysuru: The sprawling Maharaja’s College Grounds in city has turned into a fortress with Prime Minister Narendra Modi set to address a mammoth public rally at 5 this evening.

The Police have made elaborate and foolproof security arrangements for the PM’s visit.

The  venue is buzzing, as thousands of people from across the five districts are eagerly waiting to hear the Prime Minister as he addresses the BJP poll rally seeking votes for BJP candidates from Mysuru-Kodagu and Chamarajanagar LS seats which will go to the polls on Apr. 18.

People have started arriving in buses and other modes of transport from in and around Mysuru District and started filling the venue from 2 pm itself braving the scorching sun.

Narendra Modi’s rally has enthused BJP workers, who are working overtime to ensure a huge crowd. BJP leaders are expecting a crowd of over one lakh from Chamarajanagar,  Mysuru, Hassan, Mandya and Kodagu districts.

The Prime Minister, who  addressed a BJP poll rally at Chitradurga this afternoon, is scheduled to arrive at Mandakalli Airport at 4.40 pm by a special flight. After landing at the airport, the PM will travel to the venue Maharaja’s College Grounds by road, passing through Nanjangud Road, Gun House Circle, JSS Mahavidyapeetha, Chamaraja Double Road, Ramaswamy Circle, JLB Road, MUDA Circle and Kautilya Circle under SPG security.

After addressing the rally, the PM will leave Maharaja’s College Grounds at 5.45 pm and travel by road in the same route back to Mandakalli Airport, from where he will fly to Coimbatore at 6 pm.

City Police have made arrangements for maintaining zero-traffic on the VVIP’s route from Mandakalli Airport to Maharaja’s College Grounds, one hour before the PM’s arrival and half-an-hour after he leaves the city.

State BJP Chief B.S. Yeddyurappa, Mysuru-Kodagu MP and candidate Pratap  Simha, Chamarajanagar candidate V. Sreenivasa Prasad and other top BJP leaders will be on the dais. The SPG has taken control of the security arrangements.

Police personnel have been deployed in large numbers all along the route of the PM’s travel route and at the rally venue.

Metal detectors have been installed at all entry and exit points at the venue as a fool-proof security measure.

Even as Modi is scheduled to address the rally in the city, some local BJP leaders were heard saying that Modi has brought good fortune as heavy rains lashed the city late last night, which augurs well for the party.

With Modi addressing the rally this evening, scores of party leaders and workers have started arriving at the venue from morning itself.

A huge water-proof German Tent has been erected at the venue, with separate enclosures for VIPs, women and leaders, around the dais.