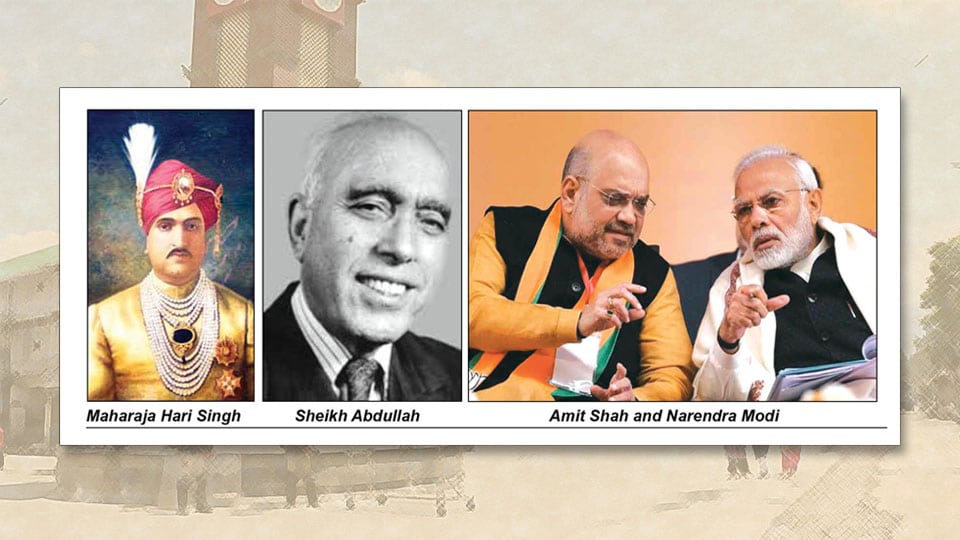 Failure on the part of the two dynasties that ruled Jammu & Kashmir since 1952, to restore peace and order has led J&K to the present predicament of being divided into two geographical units — J&K and Ladakh.

Not just this failure to give good administration, the indirect support these dynasties have been giving to the Hurriyat (those who are seeking Independence to J&K) and feigned concern shown towards terrorist attacks from across the border, must have hastened the decision taken by the BJP (NDA) Government. For 72-long-years (with the help of Congress Party) J&K politicians kept fooling the rest of India. Surely, they could not fool all the Indians for all the time to come, to recall the words of Abraham Lincoln. Today is another day of Destiny for Modi’s NEW India.

India, that is Bharat,” according to Part I Article 1 of our Constitution has from today become, in a metaphorical way, “India, that is Mahabharat.” For once BJP has, or at least seems to have, kept its 2019 election   promise and delivered on it. The Article 370 and Article 35 A are going, going…gone. These Constitutional provisions provided Special Status to Jammu & Kashmir. Now they stand Revoked.

As expected, the beneficiaries, mainly belonging to two main dynastic political parties of J&K, are crying foul. They do not seem to have satiated themselves of their hunger for power and pelf since 1952 when these provisions gave J&K Special Status. They enjoyed life as rulers, like Mogul Governors of different regions, even as people  of J&K (very humble, lovable and hard-working people) suffered under militants, terrorists and bad or no administration under their own Farooqs and Muftis with the Congress Party making political capital.

It was political dithering on the part of the freedom movement leader of Kashmir Sheikh Abdullah — father of Farooq Abdullah and grandfather of Omar Abdullah — and the last Hindu King of J&K Maharaja Hari Singh who were responsible for the mess J&K found itself then and also today. The situation for Hindus (Kashmiri Pandits) in J&K had so worsened that over 60,000 families of Kashmiri Pandits were driven out of Kashmir Valley due to militancy that they became landless emigrants (living in Delhi Camps) in their own Free India !

But the irony is that the first Hindu to be driven out of J&K by its first Prime Minister Sheikh Abdullah was none other than Maharaja Hari Singh himself. He was packed out of Srinagar. I think, the poor Maharaja chose to live in Delhi or Bombay… Paradoxically, Maharaja’s son Karan Singh has been a great patron, admirer and supporter of Congress Policy on J&K.

The division of J&K on these lines, as done today, was in fact due at the time it acceded to India under violent circumstances. Let it be. Better late than never.

Those who are now screaming ‘Foul, Foul’ in the Parliament (both Lok Sabha and Rajya Sabha) are those who were and are unable to control the stone-pelters, militants and terrorists creating perpetually disturbing situations in the Kashmir Valley. Henceforth, let us hope, with this bifurcation there is going to be peace in the Valley, Jammu and also in Ladakh. And people want peace and it is only with peace comes progress.

7 COMMENTS ON THIS POST To “Modi’s New India: Mahabharat”