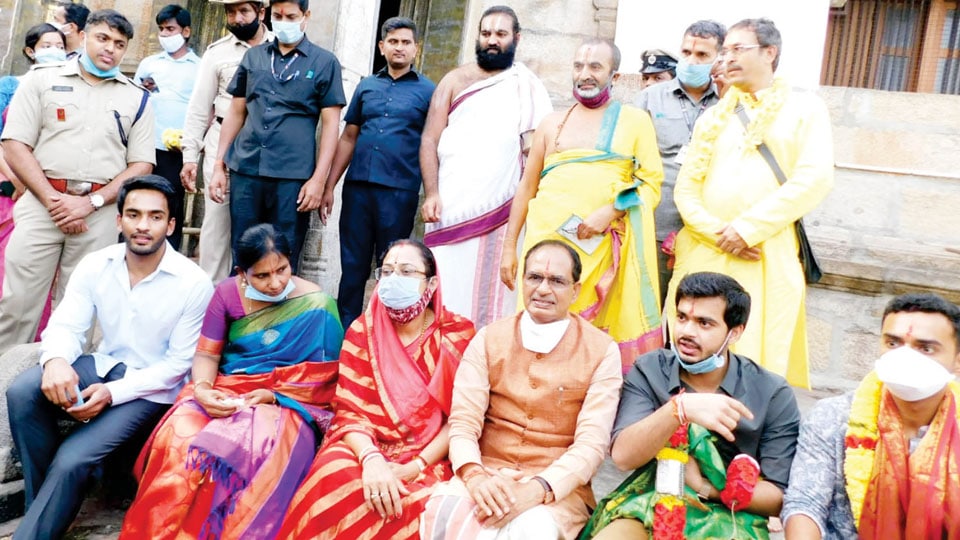 Accompanied by his family members, Chouhan arrived in a special plane at Mandakalli Airport in Mysuru and reached Melukote by road. In the morning, he visited Tirupati to have darshan of Lord Venkateshwara, and then came to Melukote to offer special puja to the deity.

This is not for the first time Chouhan was visiting Melukote. When he had lost power, he came to Melukote as Opposition Leader and had conducted special puja. Chouhan had vowed to come again if his wish of becoming the CM again materialised. After becoming the CM, he came here. Recently, he had vowed to come if he continues in power following by-elections held to several Assembly seats in Madhya Pradesh. His position consolidated after his party won the maximum number of seats recently.

“I became the CM after having darshan of Lord Cheluvanarayanaswamy. As per the wishes of Mandya Deputy Commissioner Dr. M.V. Venkatesh and priests, I have decided to offer ‘Samarabhupala’ silver chariot to the presiding deity. God has given me power and strength to serve poor and needy. Accordingly, I will discharge my duty honestly. I will come personally to handover the silver chariot,” he told the media persons.

As soon as he came to the temple, a traditional welcome was offered to him by temple authorities. He and his family members had darshan of Lord Cheluvanarayanaswamy and YadugiriNayakiBhagavadramanujacharya. His family was blessed with Rajashirvada by temple priests.

Earlier, Sthanacharya Srinivasa Narasimhan, Vidwan Rampriya Ramanuja Sannidhi Archak Vidwan Ramapriya and others appealed to the MP CM to present the silver chariot to the temple. The CM and his family members climbed the steps and had darshan of Yoga Narasimha.