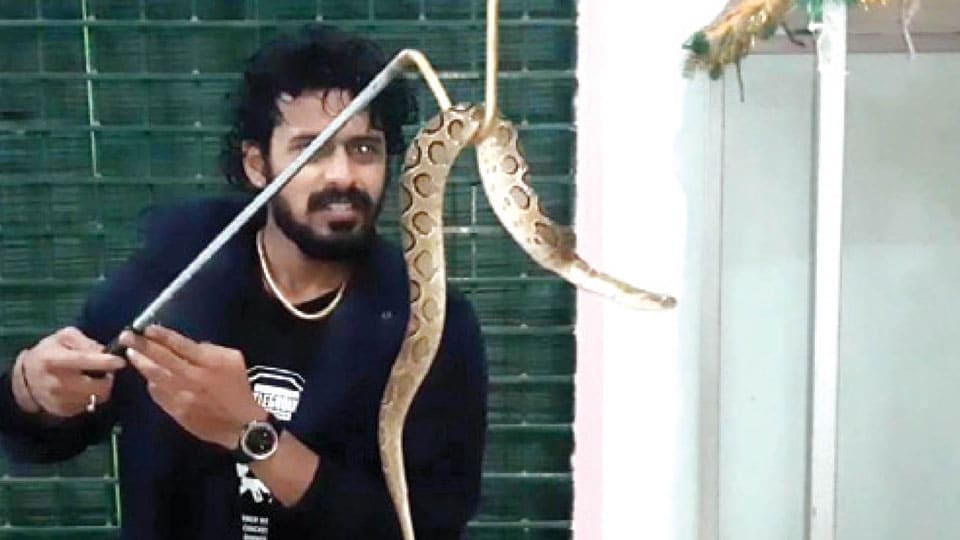 Mysore/Mysuru: Frequent sighting of snakes at houses and nearby places have left the residents a worried lot while snake rescuers have advised the residents to take precautions and avoid snakes entering their homes.

Take precautions and be cautious

Giving his piece of advise to the residents, Surya said that cold season or weather is the mating time for snakes and they come out from their nesting places. Likewise, during summer, eggs hatch and snakelets come out.

It is during these times, the residents have to be cautious and take precautions, he said and added that as snakes need warm places, they try to find shelter in empty boxes and shoes left outside houses and also among empty coconut shells, firewood piles, dry leaves heap and other things that are stockedoutside homes.

He further said that it is very dangerous to wear shoes that are left outside without inspecting it properly as a snake may have taken shelter inside it and if one tries to wear it, they may get bitten. He has urged the residents not to leave their footwear outside and also not to stock unnecessary things in the compound as snakes find it as a perfect place to hide. Snakes when threatened or disturbed, tend to attack for defending itself and added that identifying snakes and distinguishing them between venomous and non-venomous snakes is very important and catching or rescuing a snake is an art. He has urged the public not to attempt to catch or rescue snakes if they do not know about snakes as it may prove danger to them.

Kemparaju, a snake rescuer, has rescued a rare flying snake at RBI Quarters. The snake was spotted since a week at the quarters and had created panic among the people. It may be recalled that Snake Shyam had rescued another flying snake (Ornate Flying Snake) on Ramanuja Road 4th Cross here in July.