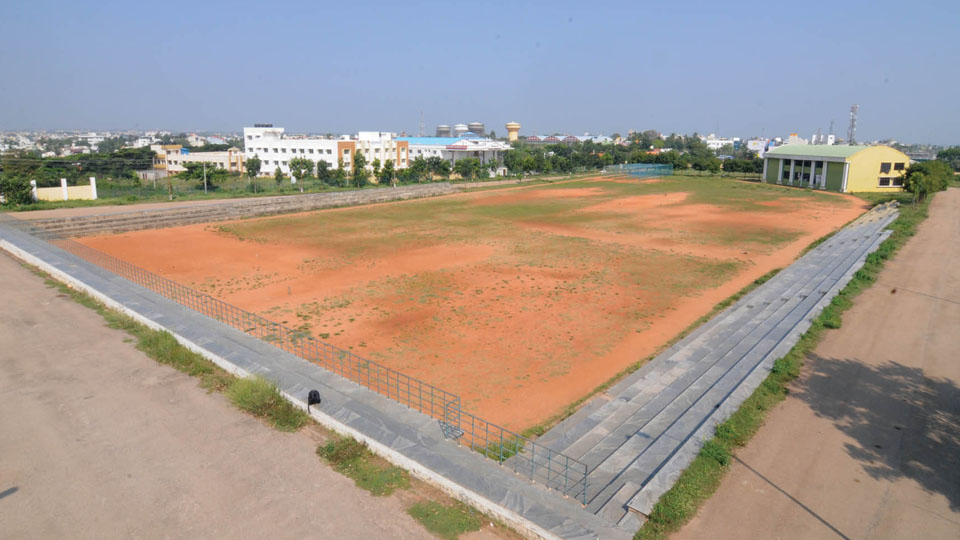 Mysore/Mysuru: The stadium at Vijayanagar 1st stage, built by Mysuru Urban Development Authority (MUDA) by spending crores of public money has now become a haven for drunkards and drug addicts. The stadium is now crying for attention.

The stadium built with a good intention to encourage sports, sports lovers and also to enable the general public to take their morning and evening walks has now become a place for undesirable practices,  thereby creating public nuisance. Lakhs of rupees are being spent for the purchase and repairs of equipment. But the failure of MUDA administration in ensuring proper maintenance of the stadium has led to the misuse of the stadium for illegal activities by miscreants.

Soon after the Sun sets, the stadium becomes a place of undesirable activities. For those  who come to a nearby choultry to attend various functions, the stadium has become an open bar for them. They buy liquor from nearby shops and freely enjoy their drinks in the open. They later discard liquor bottles, empty cigarette packs, cigarette butts, leftover food in plastic covers all over the stadium.

Some of them even sit on the overhead water tank to enjoy their drink. The stadium is being used by these miscreants as an ‘Open Party Hall.’

Added to this, there is another matter of serious concern. The stadium is being used by drug addicts too. The citizens of the area have observed a group of people taking drugs in the stadium and creating public nuisance. As a proof, used syringes and rolling paper covers used to consume drugs are seen in the drains.

The stadium is close to schools, colleges, ladies hostel and Sahitya Bhavan. Local residents are a worried lot as the stadium is being used for drinking sessions and for consuming drugs.

The MUDA Sports Complex has a basketball and tennis courts and a football ground apart from a gym. Everyday, students from various colleges come here to pursue their sporting activities. Apart from this, residents of surrounding areas like Vijayanagar, Jayalakshmipuram, Mahadeshwara Layout etc. come here every day for their walks. But the environment inside the stadium is preventing them from using the stadium.

Failure in safety and maintenance

It appears that the MUDA has completely forgotten to maintain Vijayanagar Stadium. MUDA officials visit the stadium only when it executes development works. Cleanliness has become a mirage here. At least by providing minimum security, MUDA can control illegal activities. Proper lighting facility, installing CCTV cameras  and deploying security guards can bring changes. But will MUDA do it in public interest?

Though the public on many occasions requested MUDA to repair defunct lighting facility, deploy security personnel and to construct toilets in the stadium, no action has been taken. Meanwhile, a few sporting organisations have come forward to take care of the maintenance of the stadium and even conveyed their willingness to MUDA. It is a tragedy that MUDA has not bothered to take any decision in this regard yet.

Frustrated by the laxity and total neglect of the stadium, the general public decided to clean the stadium and made an attempt to change the environment inside the stadium by cleaning it under the banner – “Swachhameva Jayathe.”

Retired Deputy Chief Engineer of Karnataka Urban Water Supply and Sewerage Board. Vishwanath, who accompanies his son everyday to practice basketball in the stadium was saddened to the see the state of affairs in the  Stadium.

He first provided a tap to the drinking water pipe and then planted 25 saplings at various places in the stadium and brought water in his car daily to water these saplings. Inspired by this act, retired Railway official M.H. Venkategowda also started doing his bit in cleaning the stadium. Venkategowda was further joined by other like minded people like Balya Foundation Trust Founder K.S. Anil, Trustees Uma Anil and K.A. Srinidhi, Corporators M.U. Subbaiah and K.V. Sridhar and civic workers.

During last year’s Gandhi Jayanti, these people have worked continuously for over 3 hours cleaning the entire stadium.

But even as they were displaying their social responsibility, the miscreants are still at work and even now they are spoiling the stadium by drinking liquor and consuming  drugs. Empty bottles and used syringes are still seen inside the stadium. Some irresponsible youth are resorting to bike racing and wheelie, thus posing a threat to the life of people.

“We collected money from the public and from those who come here for walking and made an attempt to clean the stadium which looked like a mini forest. Now, officials should give cooperation to us and ensure that miscreants don’t gain entry into the stadium and spoil its environment. They should also provide basic facilities and security to the stadium,” urged Retired Railway official Venkategowda and retired school teacher Cynthia.