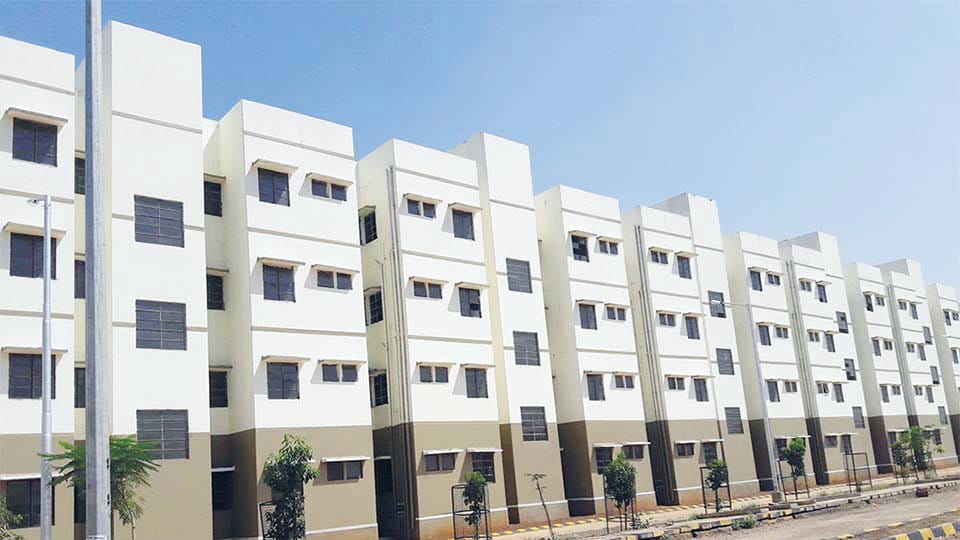 Mysuru: The Mysuru Urban Development Authority’s (MUDA) bid to solve the growing land crunch and premium on land value by building Group Housing Projects where there will be more than 2,000 housing clusters has hit a roadblock as the Government is yet to give its approval.

MUDA has so far not ventured into housing projects and had confined itself to plot development and this is the first foray into Group Housing that offers affordable houses. There is a severe crunch of land and all the proposed new layouts including the ambitious Nalwadi Krishnaraja Wadiyar Layout, Swarna Jayanti Nagar, Shanthaveri Gopalagowda Layout, R.T. Nagar 2nd Stage and Ballahalli Layout are stuck in a quagmire. Some of these layouts have been planned in late 1990s and MUDA has still not completed land acquisition process. Though it has finished R.T. Nagar 1st Stage, it is stuck in other layouts.

MUDA had prepared a plan in the year 2017 to construct 1,348 houses in the land along Ring Road in Vijayanagar 2nd Stage. This land which is locked between High Tension Road, Ring Road and Seshadripuram College was considered by MUDA as best suited for Group Housing.

The plan involved construction of a fourteen storeyed building of 1,348 houses and was estimated to cost Rs.422 crore. MUDA had reserved Rs.75 crore in its budget for 2017-18.

In all, MUDA received a total of 46,346 applications for 1,348 houses. Following the overwhelming response, the then MUDA Chairman D. Dhruvakumar and the then Commissioner N. Mahesh sent a proposal to the Government along with the project blueprint and Detailed Project Report (DPR).

Govt. seeks details, sits on file But following a change in the Government after the Assembly polls, the Urban Development Department Secretary wrote to the MUDA seeking details on the criteria and the rules framed for distribution of houses.

Following the letter, the current MUDA Commissioner P.S. Kantharaju replied to the Government along with details.

The Government now is sitting on the files even as there are over 1.35 lakh applicants waiting for MUDA sites for over twenty years. MUDA that is facing acute shortage of land within city limits had come up with this exclusive housing project in order to ease the pressure on housing.

MUDA had adopted the BDA (Bangalore Development Authority) model in building vertical group houses. But the delay in Government clearance has only extended MUDA’s wait and the applicants’ anguish.