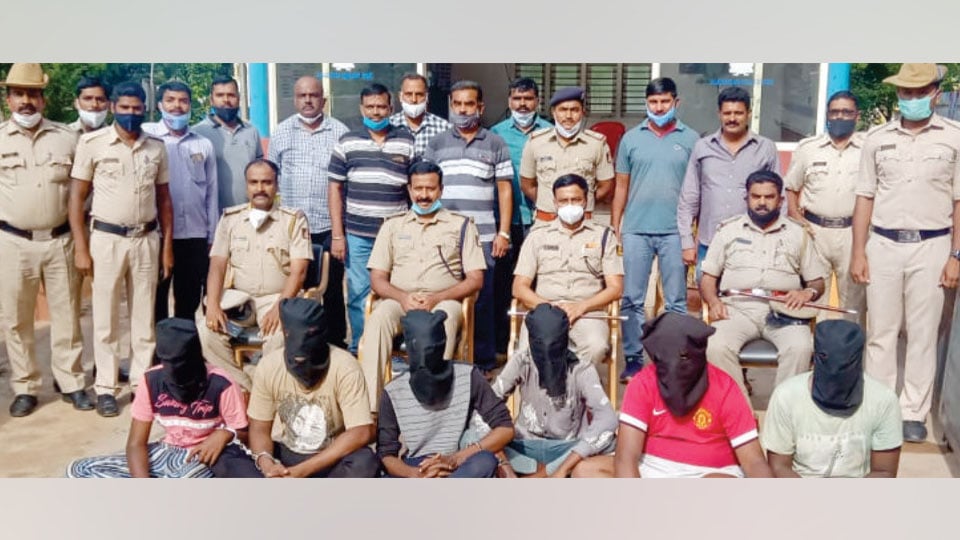 Mysore/Mysuru: Vijayanagar Police have arrested seven ‘supari’ killers in connection with the murder of a youth in broad daylight on June 17 in Vijayanagar Fourth Stage. The murder was committed over professional rivalry and competition to cash-in on increased customer base of beauty care.

The ‘supari’ killers had murdered Ashrith (31), one of the partners of ‘Infinity Hair and Skin Solution,’ a hair grafting clinic at Vijayanagar 1st Stage on June 17 at about 10.30 am. Ashrith was found lying in a pool of blood at about 11 am at Vijayanagar 4th Stage and he breathed his last while being shifted to a hospital.

The ‘supari’ killers were arrested in Bengaluru within a few days of the crime and the Police have launched a hunt to nab the prime accused couple and others who are absconding.

Following the murder of Ashrith, another partner of ‘Infinity Hair and Skin Solution,’ Goutham, had lodged a complaint with Vijayanagar Police, accusing Rajaram and his wife Shelly Latter, owners of ‘Hair and Skin Factory’ at Vijayanagar 1st Stage of murdering Ashrith.

Suspects picked up from Bengaluru

Vijayanagar Police, who had registered a case, had picked up nine suspects from Bengaluru in connection with the case and investigation had revealed that four persons were directly involved in the murder while they were indirectly helped by a couple and other persons.

The Police, based on the CCTV footages of cameras which had captured the scenes of murder and the killers fleeing from the spot and mobile phone tower location, left for Bengaluru and picked up one of the accused Naveen from Kammanahalli R.S. Palya on Saturday late night and interrogated him during which Naveen spilled the beans.

Based on the information provided by Naveen, the Police arrested the remaining six ‘supari’ killers at about 5.30 am on Sunday within 24 hours of getting information and seized two bikes, one car, a knife and lethal weapons used for the crime from them.

During interrogation, the accused have confessed of murdering Ashrith for which they had received ‘supari’ from Rajaram and his wife Shelly. They also revealed that Ashrith was the former employee at Hair and Skin Factory owned by Rajaram and Shelly, who had quit the job and started his own business along with Goutham, Manasa and Manju (all former employees of Rajaram and Shelly) in the name ‘Infinity Hair and Skin Solution’ at Vijayanagar 1st Stage.

The accused also revealed that as Ashrith knew the trade secrets while working at the firm of Rajaram and Shelly, the former employers had given ‘supari’ to eliminate Ashrith following which they murdered him.

Prime accused couple Rajaram and Shelly Latter, who had allegedly given ‘supari’ to eliminate Ashrith, have gone absconding along with others and the Police have launched a hunt to nab them.  The couple, along with others, has gone absconding since June 17, the day Ashrith was murdered and their mobile phones are switched off, according to Investigation Officer and Vijayanagar Inspector H.N. Balakrishna.

Two investigation teams have been formed and the Police officials have spread a dragnet to nab the couple and others involved in the murder.  Vijayanagar Police, who arrested the seven ‘supari’ killers in Bengaluru on Sunday, brought them to Mysuru and produced before the Magistrate, at his residence on Sunday evening, who remanded the seven accused to judicial custody.