Home » News » Museum of Democracy to be set up in Mysuru 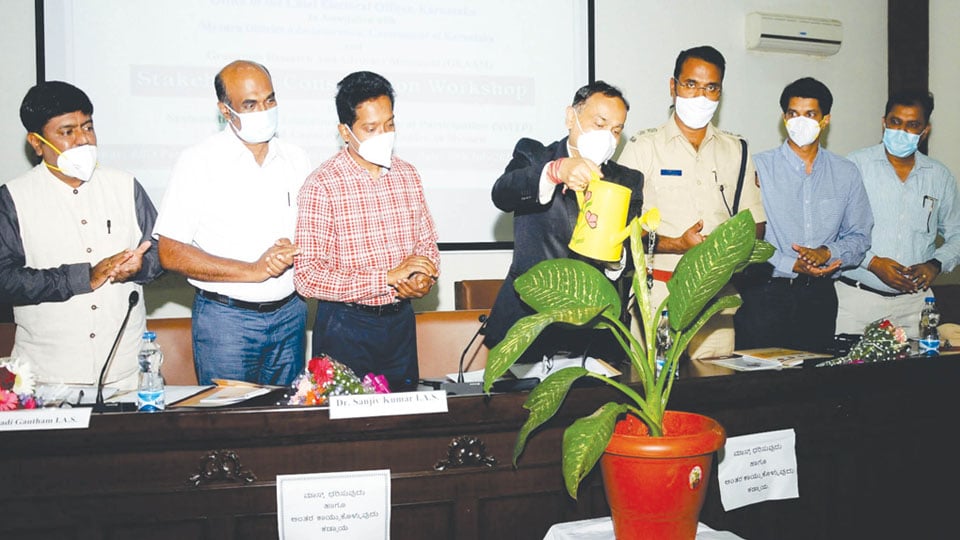 Museum of Democracy to be set up in Mysuru

Mysore/Mysuru: The Election Commission of India has proposed to set up a Systematic Voters Education and Electoral Participation (SVEEP) Museum and a Capacity Building Centre in Mysuru. The Museum will be the one of its kind on democracy and elections in the country, egging on people to vote.

This was disclosed by State Chief Electoral Officer Sanjiv Kumar on Thursday while he chaired a stakeholder consultation workshop at Zilla Panchayat (ZP) Auditorium in city.

Notably, the Mysore Maharajas instituted the Representative Assembly in Mysore way back in 1881 which is considered the first democratic legislative institution in modern India. In addition, the Mysore Paints and Varnish Limited (MPVL) was established in Mysore in 1937 by Nalwadi Krishnaraja Wadiyar. It is the only manufacturer of indelible ink used to mark the fingers of voters during elections.

Explaining the concept of the Museum, Sanjiv Kumar said that Mysuru was the ideal place for the Museum of Democracy as the city has a reputation of being a tourist destination that sees tourist footfalls of more than 40 lakh a year. “With illiteracy levels still high, it is necessary to reach out to the masses and create greater public awareness that every vote counts. We want to improve both urban and rural voter turnout from the present dismal state. The Museum and the Capacity Building Centre would be catalysts for high voter turnout,” he said.

Directing officials of the Grassroots Research and Advocacy Movement (GRAAM), an NGO, to submit the Detailed Project Report (DPR) by Aug. 15, he said, “Mysuru is a Heritage City with a number of attractions that attract both domestic and international tourists. No tourist will visit a city just to see one museum and we hope that the SVEEP Museum will create awareness and educate people about democracy, elections and the significance of exercising franchise without fail.”

READ ALSO  By-polls to one Lok Sabha seat and two Assembly segments in the State to be held on Apr. 17

“We intend to make democracy more participative. Already Mysuru has the distinction of achieving participatory governance and local representation even before India got its independence. Funds will not be a constraint for the project but GRAAM must present the proposal on how the Museum and the Capacity Building Centre will be self-sustainable without requiring funding for maintenance and operation,” he said.

Dr. Basavaraju R Shreshta, Executive Director, GRAAM, said the concept calls for extensive consultations with all stakeholders including elected representatives to elicit ideas. He sought time till Aug. 30 to submit the DPR.

Deputy Commissioner (DC) Dr. Bagadi Gautham welcomed the idea of establishing a world-class vibrant Democracy Museum and Capacity Building Centre to propagate stronger democratic values and ethical electoral practices. “It is a golden opportunity for Mysuru to provide a model exhibition and structure for such an institution,” he opined.