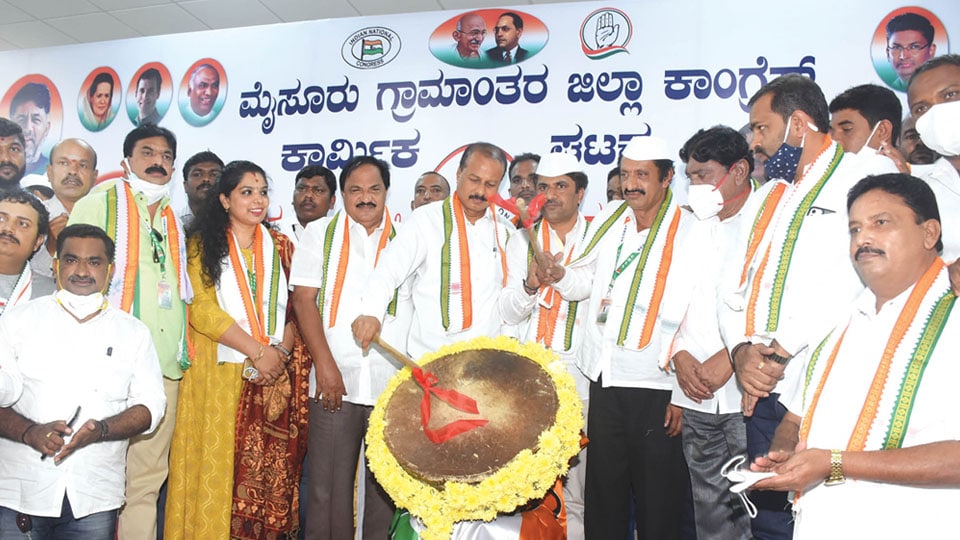 Mysore/Mysuru: The anti-labour policies of Government of India headed by Prime Minister Narendra Modi were detrimental to the interest of workers, said KPCC Working President and former MP R. Dhruvanarayan.

He was speaking at a function organised in connection with the inauguration of District Labourers’ Conference, installation of H.K. Manjunath as new District President of KPCC Labour Cell,  State Executive Committee meeting and distribution of labour card here on Wednesday.

The former MP said that the previous Congress Government protected workers interest and nationalised private-owned companies. But the BJP-led NDA Government privatised profit-making Public Sector Undertakings (PSUs) and neglected workers interest by diluting labour laws. Job security cannot be ensured for workers if the PSUs were privatised. Prime Minister Narendra Modi has exhibited his love for big industrialists by privatising profit-making PSUs. Development was possible if both agriculture and industry are together. More jobs could be created if more number of Public-Sector Undertakings (PSUs) are established.

He said labourers of Mysuru have plenty of problems like less wages and salary. Understanding this, KPCC Labour Cell has been asked to prepare a list of problems of workers and to respond to it.

But the people were facing problems as about 14 lakh factories have been closed, 18 crore people have lost jobs and 20 crore people have gone beyond Below Poverty Line (BPL) in the country during the BJP rule, he said and added that the Ministers were looting money even in bed and vaccine purchases during Corona crisis, Puttaswamy said and alleged that a woman Minister had made money even in the purchase of eggs meant to be distributed among children.