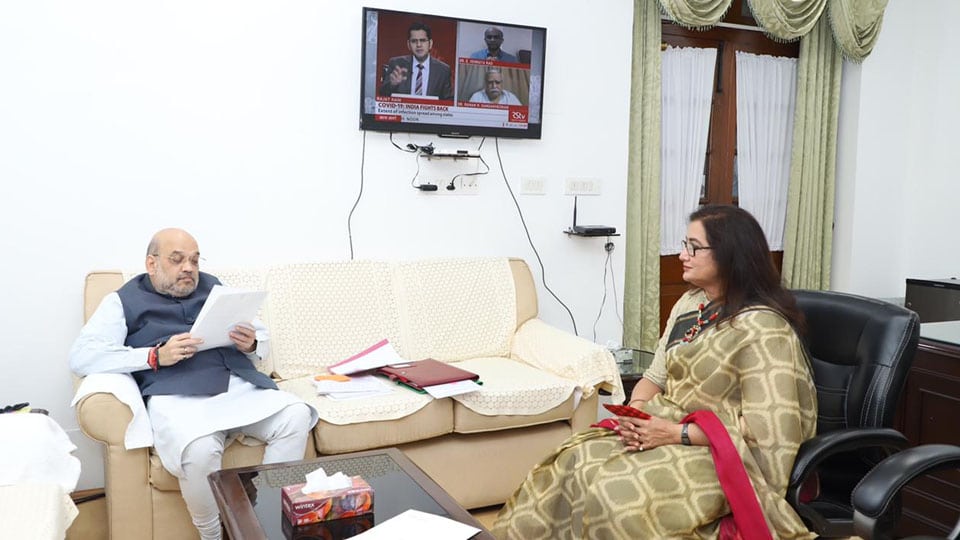 New Delhi: Mandya MP Sumalatha Ambarish, who has repeatedly raised the issue of rampant illegal mining around the Krishna Raja Sagar (KRS) Dam that has threatened the safety of the Dam, yesterday met Union Home Minister Amit Shah in New Delhi. She pressed for a CBI probe into the illegal quarrying and mining around the Reservoir.

Submitting a memorandum to the Home Minister, the Mandya MP said that illegal mining of stones was being carried out in the Dam vicinity and the activities are being blessed by local politicians who have a huge stake in the mining industry with many of them being unlicensed.

Local residents, environmental groups and villagers are being bullied and threatened by people who have influence and officers have turned a blind eye towards the illegality.

“Mining is rampant, uninterrupted despite a Supreme Court observation regarding structural damage to the KRS Dam on account of heavy use of high-intensity explosives to cut the stone. Due to the mining and quarrying activities with politician-criminal-official nexus, cases are not registered and fines for violations are not levied. As a result, the safety of the Dam, a lifeline of people of South Karnataka and even Tamil Nadu, is threatened,” Sumalatha noted.

She said there was an impending threat of breach of the Dam and its structure because of the blasting and consequent tremors. Apart from constant tremors, loud sound and house walls cracking due to the impact, illegal mining activity has caused air and water pollution, environmental hazards to human habitations, including repeated miscarriages and breathing difficulties, Sumalatha stated in her memorandum.

She also said there was a threat to animal life, including indigenous and endangered species at Ranganathittu Bird Sanctuary, apart from damage to water sources. She urged the Home Minister Shah to direct a central agency such as the CBI to investigate the rampant mining in the region and help save the lives of people, ensure the safety of the Dam and also give a chance for the environment to thrive.