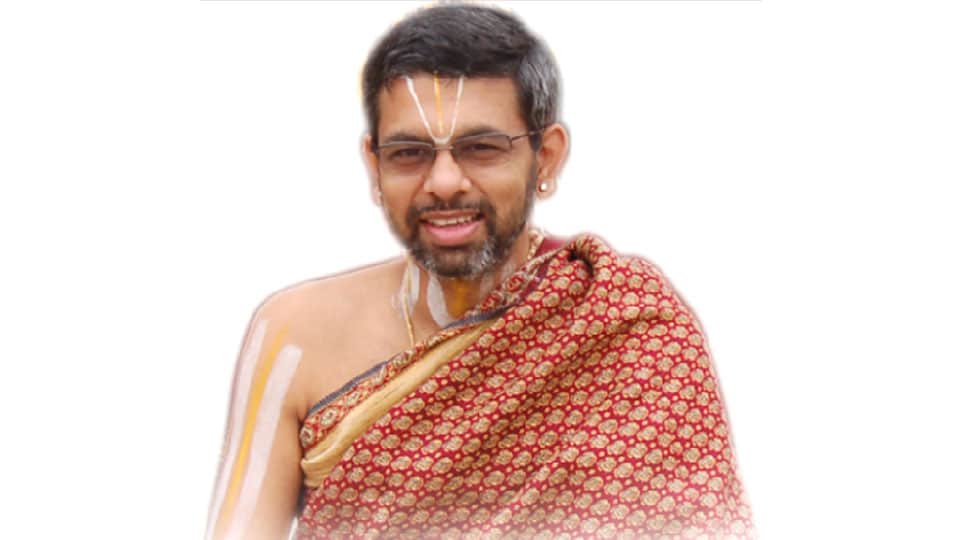 He will be accompanied by Vid. Srikanth on violin and Vid. Dasappa on mridanga.

Profile: Dr. Srinidhi has been spearheading the spiritual beacon in India across diverse audience with his lectures, discourses, writings and classes in his inimitable style of delivery and simplicity. He earned his Bachelor’s degree in Electrical Engineering and later went on to complete his PG in Management from TA Pai Institute of Management, Manipal. He has secured his Ph.D in Quality Management based on spirituality contained in Bhagavad Gita.

Having been an industrialist entrepreneur and an academician for the last 25 years, he is now serving as Director of National School of Business and VYASA Business School, Bengaluru. Alongside his academic and professional pursuits has been his profound interest in learning myriad spiritual hymns and classics. His father U.Ve. K.S. Parthasarathi guided him into the path of spirituality and righteousness. Showered by the blessings of the Pontiffs of Parakala Mutt and Ahobila Mutt, Dr. Srinidhi engulfed himself into mastering of Indian scriptures, Vedas and Upanishads. He learnt Yajurveda under Vedanta Pravachana Ratna U.Ve. G.N. Ramaprasad, Divyaprabhandham under Divyaprabhandha Choodarnani U.Ve. P. Srinivasan Swami and Karnatak Classical vocal under Vidwans S. Lakshmana Shastry, Madhur Balasubramanyam and G.N. Desikan.

Many articles authored by him have been published in journals, magazines and newspapers. He has been associated with many Universities, Colleges and Corporate houses to train both faculty and students. For his contribution to Spirituality and Indian culture, he has been conferred the title ‘Veda Maartaanda.’