Home » Columns » Abracadabra By K. B. Ganapathy » Musings on ‘Conversation’ with Jairam Ramesh 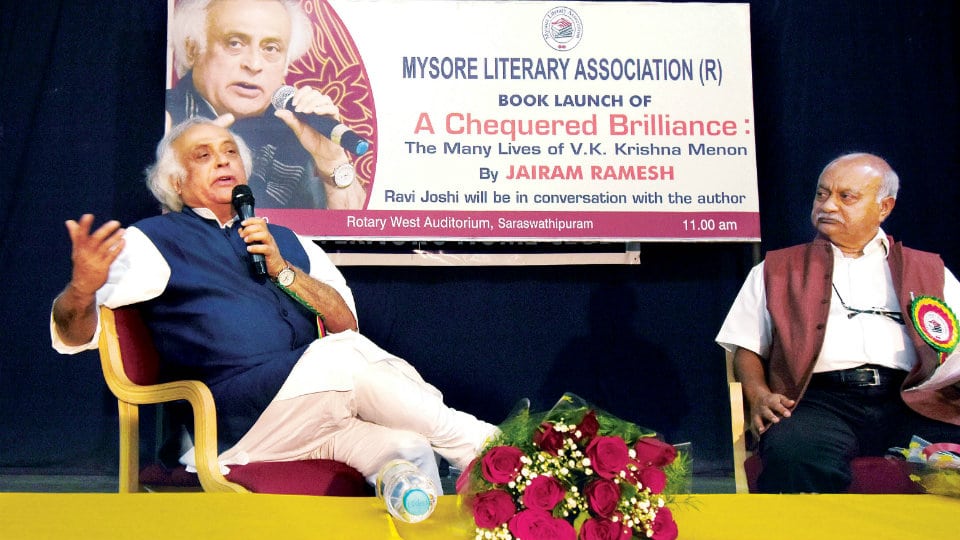 Musings on ‘Conversation’ with Jairam Ramesh

Om Namah Shivaya. After a wakeful night, in fits and starts of course, to observe the Night of Shiva, the third of the Triumvirate Brahma, Vishnu and Maheshwara of the Hindu pantheon, I was in no mood to write this column. However, the morning before Shiva’s night there was an interesting event at the Rotary West organised by the Mysore Literary Association. It was to launch Rajya Sabha MP Jairam Ramesh’s book, a biography, on our former first High Commissioner of India in England and the Defence Minister V.K. Krishna         Menon — A Chequered Brilliance: The Many Lives of V.K. Krishna Menon.

Since I had much admiration for Jairam Ramesh, a genuine intellectual and much learned, unlike the crowd of pseudo-intellectuals (and, of course, pseudo-secularists) found in his Congress party, I decided to yield to the loving persuasion of my old friend Prof. K.C. Belliappa, the President and father of the Literary Association, to attend the event.

Like always, the welcome speech by Prof. Belliappa was music to my ears, no matter it bordered on flattery. True, sometimes truth also sounds like flattery. This may be one such time, but I fully agree with the Professor who may not have anything to benefit from an out-of-office former Minister! He said that in the Congress party there were only two great intellectuals today. I knew he would name Jairam Ramesh  as one and even as I was wondering at the second name, he said it — Shashi Tharoor. I heaved a sigh of relief. Thank God he did not say Rahul Gandhi or P. Chidambaram !

The hall was full of retired people and the absence of youngsters was conspicuous. After all, Krishna Menon, about whom much has been written and spoken about, would be a non-entity to the present generation and for the oldies a bore at this distance of time. I admire the courage and gumption of Jairam Ramesh for venturing on this book. Best of luck. As long as archives are open it is not a big deal to write biographies of this kind and size. The avoirdupois. This is not to make light of his labour. After all, writing is his second nature if we look at the number of books he has written.

On occasions such as this, we generally find the person chosen to engage the author in ‘conversation’ dominating the proceedings eclipsing the author. But it did not happen here yesterday. Ravi Joshi, mentioned as a retired diplomat and also as a R&AW (Research & Analysis Wing) man has done his homework well, introduced the book in a perfect format and asked questions that were brief and to the point. I thought the answers too would be to the point with clarity. But, Jairam Ramesh was seen going at a tangent that Ravi Joshi seemed struggling to rein him in. After all, the audience would not have read the book, so this ‘conversation’ should be like the sweetmeat shop owner giving his customer a piece of halwa as a sample to savour. Hmm, if he smiles and smacks his lips, the customer orders  for a kg of halwa !

At the end, it was announced that Jairam Ramesh would field questions from the audience. As usual some gave lectures, rather than asking a question. Ravi Joshi managed and Jairam Ramesh struggled to find a question in what was spoken and said something by way of answer. The next question please…

The show was over. As I and my friend got up to move out, some one called my name and asked, “Any question from Ganapathy.” It was true I had three questions to ask but abandoned them not to disappoint others. The questions I had in mind were certainly not about Field Marshal K.M. Cariappa about whom Jairam Ramesh had made an uncomplimentary remark and to which I had written in this column as a rebuttal nor about the resignation of Gen. K.S. Thimayya when Krishna Menon was the Defence Minister. One question related to what the author and Journalist Tavleen Singh (bete noire of Sonia Gandhi) had written about Jairam Ramesh in her book ‘India’s Broken Tryst’; another question was about what Khushwant Singh, the renowned author and journalist had written about Krishna Menon and the third one was about what Jairam Ramesh had said about Prime Minister Modi without naming him while answering a question from Ravi Joshi.

I decided to ask the last of the questions mentioned above. Jairam Ramesh had said that though a demand was made by our Defence Minister Krishna Menon for higher allocation of budget for Defence, Nehru, the then Prime Minister, could not oblige… and then said, ‘Nehru had to consult others in the Cabinet…unlike it is now.’ The innuendo in this passing remark was obvious to those who are familiar with Congressmen  who are Modi baiters, whenever opportunity presents. Like the present one. All that Jairam Ramesh was trying to say in a subtle, clever way was that Nehru was a great Democrat, with capital D, while the present Prime Minister Modi is NOT.

I asked him, why he brought in the present Prime Minister in his answer and to elaborate on it. Well, he did elaborate repeating the first part of his answer given to Ravi Joshi but did not answer the second part.

I guess, with old journalists ‘habits die hard.’ I told him that he did not answer my question, the critical part of it. Why did he allude to the present Prime Minister? Of course, by now the audience began to melt and Jairam Ramesh got busy signing his books.

History is replete with examples of wise and brilliant people serving under rulers and leaders like Emperor Nero, Tughluq and Hitler. In contrast we have the example of such wise and brilliant people serving under emperors like Ashoka the Great, Akbar the Great and Krishnadevaraya of Vijayanagar empire. I do not know under which of the above two kinds Jairam Ramesh served as a Minister. But let me relate an episode from Tavleen Singh’s book. Readers may easily digest it and understand with regret how good people like Jairam Ramesh sometimes compromise on principles and ethics of life.

Newspaper readers and the rich people must have heard about a futuristic city that Nationalist Congress Party (NCP) supremo Sharad Pawar’s nephew Ajit Pawar is constructing near Pune known as Lavasa. It was a city with a footprint the size of Paris. Tavleen Singh writes that it would be a new city of a kind never seen anywhere in India with total environment compliance.

But why did Sonia Gandhi, through the Environment and Forest Minister Jairam Ramesh, order the issue of notice to Lavasa Corporation “to show cause why the city should not be demolished for violating environmental permission?” As a result, the work on the project was stopped and the matter went to the Court causing inordinate delay in completing the project and financial loss.

Tavleen Singh writes, Sonia Gandhi wanted to “Put her old bête noire Sharad Pawar in his place.” “She appears never to have forgiven Sharad Pawar for raising the issue of her Italian birth.” He was consistently opposed to the idea of India having an Italian Prime Minister. So he had to be punished. I was surprised that a man like Jairam Ramesh seemed simply yielding to Sonia Gandhi’s, apparently, vengeful act.