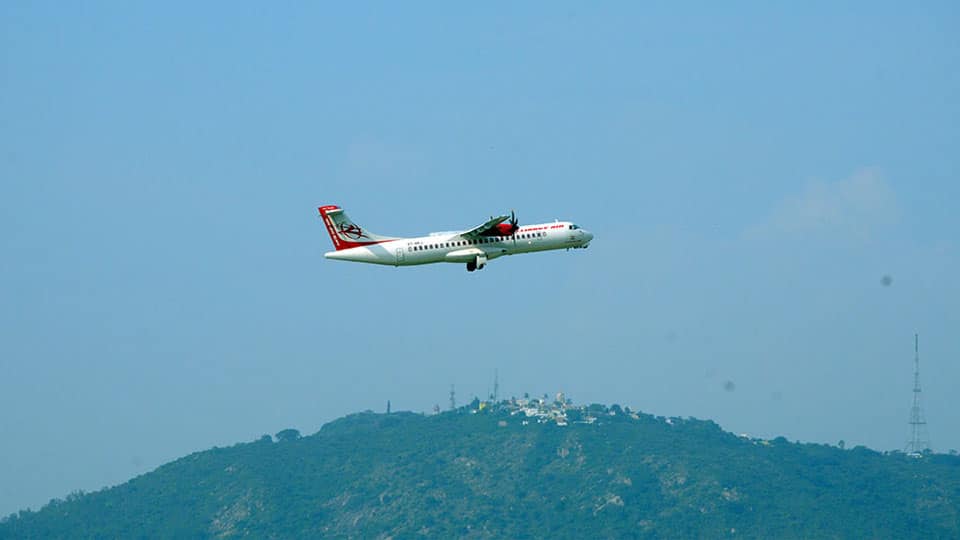 Mysore Airport at Mandakalli is well-known for the speedy pace of developmental activities. Even passengers showed interest and enthusiasm to travel from this tourist city to various destinations — Hyderabad, Chennai, Bengaluru, Goa, Cochin and Belagavi. Passenger flow ensured over 80 percent to 85 percent average flight occupancy all through on season and off season, especially under Ude Desh Ka Aam Nagarik UDAN (Regional Connectivity Scheme- RCS). Many destinations are connected, giving fillip to the RCS with full potential.

This Weekend Star Supplement profiles the Mysore Airport that is alive and kicking now, thanks to Government schemes and the initiatives taken by elected representatives and officials.

Since Mysuru is known to be a cleanest city under Swachh Bharat Abhiyan, AAI has adopted many environment-friendly programmes like Single Use Plastic-Free Airport and thereby keeping its greenery intact by planting more than 1000 saplings in coordination with District Forest Authorities.

Giving fillip to the facilities inside the passenger movement areas, AAI has brought Medical Inspection/Emergency Medical room inside Terminal Building attending various medical issues from arrival and departure of passengers and delivering on time though Expression of Interest model by  BGS Apollo Hospitals, Mysuru.

Taking security and safety into high consideration, meeting the requirements specified by Directorate General of Civil Aviation (DGCA) and Bureau of Civil Aviation Security (BCAS), security forces have been enhanced. Daily routine check by Bomb Detection Team (BDTS) with dog squad is being carried out and also all operational duties are checked using breath analyzer to ensure safe and better functioning standards.

New updated Flight Information Display System (FIDS) is under progress. To facilitate passengers with better communication, free 5G WiFi facility is being provided.  Advertising rights were given to agencies to generate revenue in order to develop more facilities and thereby focusing on holistic Airport development.

More flying/watch hours were accommodated for scheduled and non-schedule flight operations and also for pilot training institute by Orient Flying School along with NCC programme. This Airport was instrumental in mitigating disasters as per the Disaster Management Plan during flood and other calamities in Karnataka and neighbouring Kerala by supporting beyond duties to facilitate rescue operations by Indian Air force (IAF) and other defence establishments. Karnataka government utilised the services of Airport for cloud seeding in drought-prone areas.

A 100 ft monumental flag was commissioned to give respect to freedom fighters and to flutter 24X7 keeping the patriotic spirit of the nation to the highest level. KSRTC Volvo bus facility was provided for every incoming movement from every destination right at the arrival which made the city connected at all times. Moreover, a proposal has been made to connect Ooty and Kodagu on all days, keeping tourism connectivity at priority. In addition, car rental service facility is in the pipeline.

Every now and then VIP-I, II and III along with cabinet ministers and Chief Ministers of States and many executives have utilised the services.

AAI, Mysuru has been awarded 3rd position — pan India — in the contest held for the best decorated airport in category-III for Independence Day decoration. Bird chasers along with zone guns have been employed for bird-hit-free air movements.

Mock drills to prepare for emergencies

AAI has taken various initiatives to acquire the land for Future Expansion of Airport to cater to wide-bodied aircraft and thereby enhancing the potential to the exponential level for more movements and helping increase non-aeronautical revenues through commercial activities at city side.

Intensive study has been conducted on land survey of the required land to construct an underpass on the adjoining National Highway (NH-766). Estimate for wall-to-wall grading has been submitted for maintaining standards of operations and also to bring unutilised land for development to generate revenue.

Apron Extension to cater two more number of ATR 72s is under progress to meet the requirements of more movements and connectivity to destinations like Mangaluru, Coimbatore, Tirupati, Shirdi, Hubballi, etc.

Various works are in progress to accommodate public facilitation like construction of public toilets, canteen, staff parking, bus shelters etc. Keeping rain water harvesting and beautification in mind, landscaping has been done at both city side and air side for  aesthetic presentation.

This increased flight operations from the Airport became a reality after the Narendra Modi Government introduced the UDAN scheme and after Mysuru-Kodagu MP Pratap Simha and Mysore Airport Director R. Manjunath took keen interest in convincing the Civil Aviation Ministry and airline operators to introduce more flights as Mysuru has the potential. Following this, many new flights were introduced and this saw a healthy rise in the occupancy rate.

The Airport that handled only one flight to Chennai in 2017 now handles eight flights and 16 routes including Belagavi, Hyderabad, Bengaluru, Kalaburagi, Goa and Chennai.

The Kochi flight has been grounded as works on upgrading the Cochin International Airport is on and will be completed by March this year when the flight services will resume. Then, the total flights operated from Mysuru will touch nine and there are plans to introduce more flights to  different destinations.