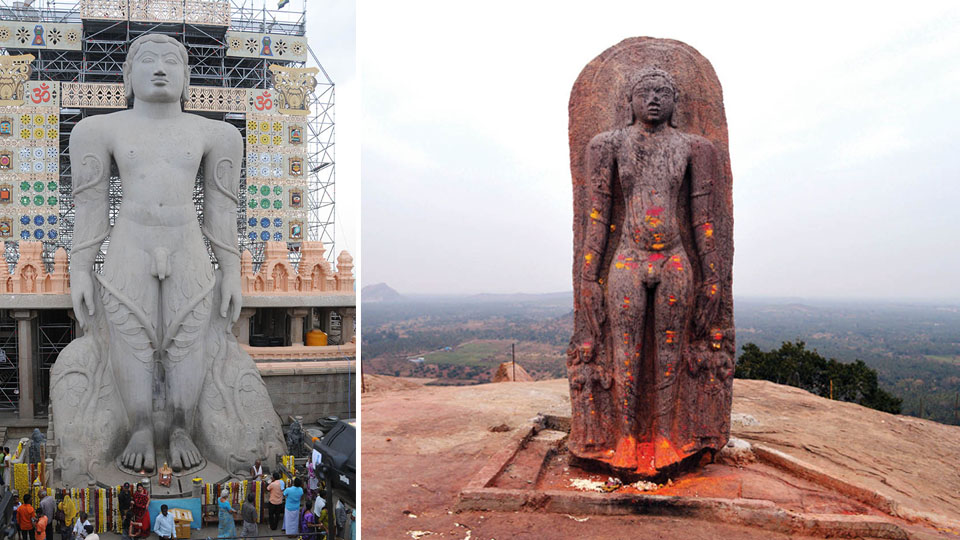 While all eyes are on the 58.8 feet tall monolithic statue of Lord Bahubali or Gommateshwara in Shravanabelagola for Mahamastakabhisheka held once in 12 years, there are other Bahubalis also in Karnataka and some of them need urgent conservation efforts.  This Weekend Star Supplement takes the reader on a spiritual journey of some of the lesser known Bahubali statues across the State along with the well-known ones.

History repeats’ and it repeats at Shravanabelagola once in 12 years and it is called the Mahamastakabhisheka of Lord Bahubali or Gommateshwara.  The 58.8-ft monolith statue of Bahubali standing atop Vindhyagiri in a meditative position with half-closed eyes and a faint smile becomes the focal point of Mahamastakabhisheka where the statue is anointed with several scented liquids.

Mastaka means head in Kannada and Abhisheka means anointment. So, together it is Mahamastakabhisheka that occurs once in 12 years. This year, the celebrations have already started. The anointment perse will begin from Feb. 17 and go on till Feb. 25.

Mahamastakabhisheka is a grand consecration and devotees celebrate this ritual by pouring 1,008 vessels of water from scaffolding near the top of the statue. After the offering water, the statue is anointed with a mixture of sugar-cane juice, milk, and saffron. Along with many sacred and fragrant liquids which smell far and wide, the statue is sprinkled with flower petals, turmeric and sandalwood powders along with vermillion. Devotees also offer valuable stones and coins made of silver and gold to the deity.

While the Bahubali statue at Shravanabelagola is the cynosure of all eyes, there are several Gommateshwara statues across Karnataka. While a handful of them are known to the people, there are several of them that are unknown or far from public view. Seeing these statues of the revered Jain monk or reading about them one feels why so many statues in Karnataka.

The answer lies in the influence of Jainism in Karnataka. While Shravanabelagola, Moodabidre, Karkala and Dharmasthala are considered as the hub of Jainism, the influence has also spread to Mysuru, Mandya and Shivamogga regions where Bahubali statues have been discovered.

Among the Gommateshwara statues found in Karnataka, the Bahubalis of Venur (near Beltangady) and Dharmasthala in Dakshina Kannada district, Karkala in Udupi district and Gommatagiri in Mysuru district are perhaps better known. Along with these statues, there is a bronze statue of Bahubali, which is worshipped at the altar of Gommateshwara in Shravanabelagola. The biggest bronze statue of Lord Bahubali is at Moodabidre Saavira Kambada Basadi or Thousand-Pillared-Temple.

There are many Bahubali statues in Karnataka and all of them are located in southern part of the State. This is due to Jain influence in the region. South Karnataka was a strong bastion of Jainism and legend says that Chandragupta Maurya, who reigned from 322 BC to 298 BC, abdicated his throne and followed his guru Bhadrabahu from Pataliputra to Shravanabelagola where he died. Later, this region was under the Gangas and the Hoysalas who were also strongly influenced by Jainism.

Some of the probable theories to explain why Mahamastakabhisheka is held once in 12 years:

The Gommateshwara statue at Shravanabelagola is the largest monolithic statue of Bahubali in the world with 58.8 feet in height in Hassan District. The gigantic statue of Bahubali is carved out of a single block of granite rock and stands on top of Vindhyagiri or Vindhya hill. The carving of the statue started in 978 AD and it was commissioned by Chavundaraya, the Prime Minister and Commander-in-Chief in the Talakadu Ganga Kingdom. The granite statue can be reached after climbing more than 600 steps.

Another legend says that Chavundaraya, on his way to pilgrimage with his mother, arrived at this place overshadowed by two hills, Chandragiri and Vindhyagiri with a pond in between. In a dream, Chavundaraya saw himself shoot an arrow from the summit of Chandragiri to the adjacent hill, as directed by a ‘Yakshi’ and the figure of Gommateshwara flashed from the spot where the arrow landed.

Following this, he commissioned the carving of the same image from a granite monolith under the supervision of sage Arishtanemi.

The statue faces north and Gommateshwara’s upright posture of meditation known as ‘Kayotsarga’ that is practiced to attain salvation by practicing renunciation, self-restraint and complete dominance of ego. The digambara (nude) form is typical of Jain traditions and it symbolises one’s victory over earthly attachments and desires that hampers their spiritual ascent towards divinity.

The statue has ringlets of curly hair and large elongated ears. His eyes are open in a face with perfectly chiselled features and are sporting a faint smile tugging at the corner of his lips. His face, smile and posture embody a calm vitality ascetic detachment. The statue depicts broad shoulders with arms stretched straight down.

The base of the statue depicts an anthill and a creeper is twined around both his legs and arms, blossoming into flowers and berries on the upper arms. The statue stands on a carved lotus flower, a symbol of his sainthood and divinity and is devoid of support from the waist up.

The statue has linguistic significance with carved inscriptions in Kannada and Tamil, as well as the oldest evidence of written Marathi, dating back to 981 AD. The inscription is dedicated in praise of the Ganga king Rachamalla who funded the effort, and his general Chavundaraya, who commissioned the statue.

The 42-feet Bahubali monolith statue is located at Karkala, one of the major junctions for religious tourists. Karkala region has tremendous influence of Jainism since the 14th and 16th Centuries. The region was ruled by Bhairavarasa family and king Veerapandyadeva consecrated the statue in 1432 AD on a rocky hill. 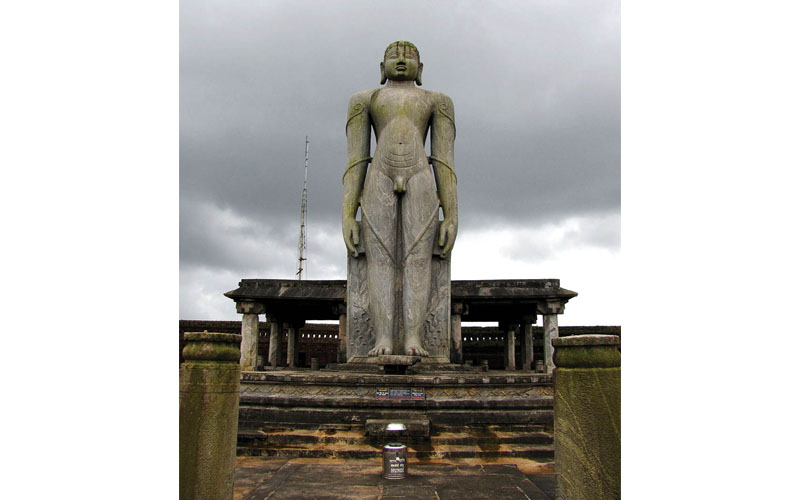 This particular statue is the tallest for the coastal districts and is the second tallest in Karnataka. Karkala derives its name from “Kari Kallu” that literally means black stone or black granite. This idol too is one of the main Jain pilgrimage centres. Whoever comes to Karkala will make it a point to visit the Saavira Kambada Basadi at Moodabidre. Karkala is also an important Jain pilgrimage site since it is home to around 18 basadis.

The third tallest Bahubali statue is located at Srikshetra Dharmasthala, the abode of Lord Manjunatha Swamy and Annappa Swamy – prominent Hindu deities. The presence of Bahubali at Rathnagiri, the heart of Dharmasthala, marks religious harmony. Interestingly, the Dharmadhikari (chief) of Dharmasthala Dr. D. Veerendra Heggade is a Jain.

The 39-feet statue was inspired by D. Rathnavarma Heggade and Rathnamma Heggade. Greatly influenced by Rathnavarma Heggade, famed sculptor Renjala Gopalakrishna Shenoy began carving the statue in 1966 at Karkala. This too is a single rock statue with a pedestal of 13-feet. 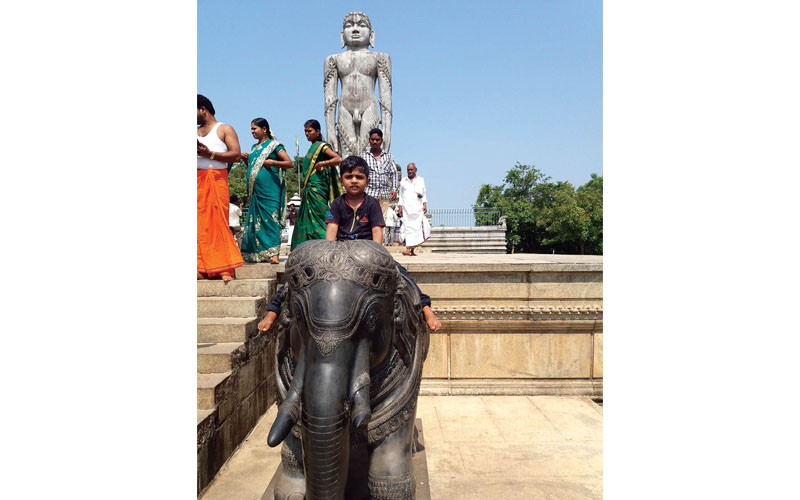 Renjala Gopalakrishna Shenoy completed the statue carving works in 1970 and Dharmadhikari Veerendra Heggade conceived a grand plan of transporting the 170-tonne statue from Karkala to Dharmasthala, covering a distance of 34 kilometres. The foundation stone for “Bahubali Vihara” atop Rathnagiri was laid in 1970.

The statue was transported on a trolley with 64 wheels that was driven by three tractors in 1973. The statue installation was completed on December 25, 1975 and the works were supervised by Veerendra Heggade and Hemavathi Heggade.

The nearest statue of Bahubali to Mysuru District is Gommatagiri in Hunsur Taluk on the way to Madikeri. The place is around 25 kilometres from Mysuru and the statue is about 20 feet. The height of Gommatagiri Mountain is about 200 feet. One has to climb 90 steps to reach the Bahubali statue. The statue is over 700 years old and it is an early creation of Vijayanagar rulers in granite stone. It is also said that the statue was established by Ganga dynasty rulers. Snake, which is the traditional symbol of Jains, has been carved to encircle the feet of Lord Bahubali and wild vines have been carved from the feet to the head. This statue is quite similar to the Bahubali statue in Shravanabelagola.

The 38-feet Bahubali statue at Venur in Beltangady Taluk in Dakshina Kannada is the fourth tallest in Karnataka. It was established in 1604 AD by Fourth Thimmanna Ajjila. Venur has a recorded history since 1154 AD and it was ruled by Ajjila dynasty for over 632 years. There is an interesting story behind this Bahubali statue. Bhairavarasa family that ruled Karkala wanted to take this statue to Karkala. To prevent this, Ajjila rulers and people buried the statue on the banks of Gurupura River.

A bitter battle took place between Bhairavarasa king and one of Ajjila kings. The Bhairavarasa king lost the battle and he was forced to drop the plan of shifting the Gommateshwara statue to Karkala. The statue was later dug out and consecrated. The single rock statue stands facing westward on a high platform on the banks of River Phalguni.

This 18-feet Bahubali statue is located at Basthi Hosakote village at Bookanakere Hobli of K.R. Pet Taluk in Mandya District.

The place is also called Kurubara Basthihalli and is close to backwaters of River Cauvery. The statue is in a state of complete neglect and is located near a ruined temple belonging to the Ganga period. This statue is has not been authentically dated. 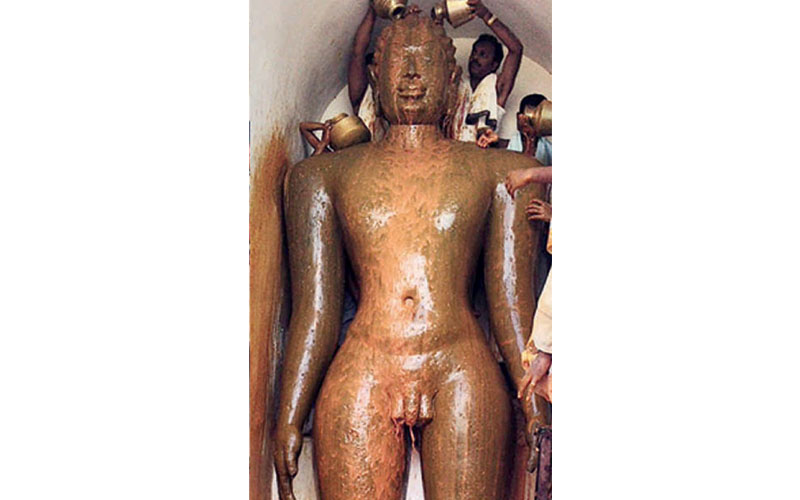 The statue does not depict artistic perfection, the thighs and knees are globular in shape and disproportionate. The village was once perhaps a Jain centre, but today is Kuruba dominated. Mahamastakabhisheka is performed here by Basthi Hosakote Bhagavan Bahubali Digambara Jain Trust. Apart from the Bahubali statue, traces and remains of many Basadis, statues of Yaksha and Yakshis, Jain Thirthankaras, logos can still be found at Arethippur. Unfortunately, the place has been neglected by authorities and the evidences of ancient history are slowly vanishing. Arethippur is also called Bastipura or Basadi Tippur, near Kokkare Bellur in Maddur taluk. The first Mahamastakabhisheka to this Bahubali was performed on Dec. 2, 2017.

Realising this, the temple authorities have commissioned another miniature Gommateshwara statue that will be placed below the Vindhyagiri in front of Bandara Basadi. The ash rock statue has been carved at Shilpakala Kendra at Dasappadoddi near Ramanagaram by sculptor Ashok Gudigar. 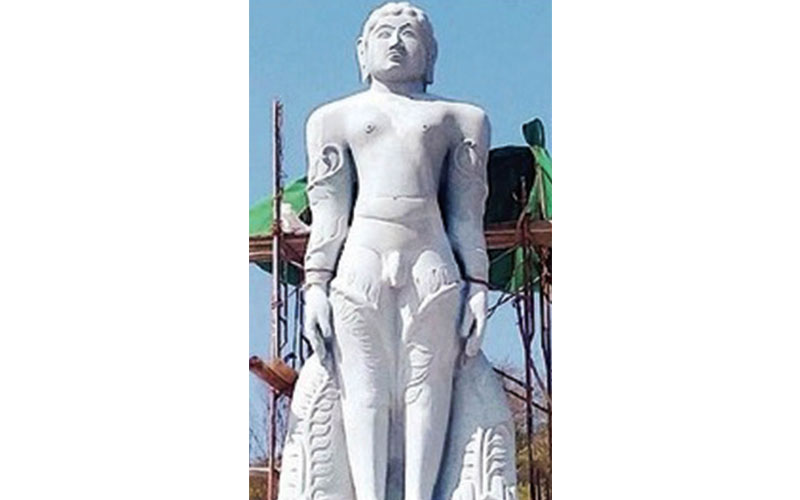 The 10-feet statue has been carved and transported to Shravanabelagola and will be consecrated before the actual Mahamastakabhisheka begins.

Kanakagiri, literally translated to Kannada means hill of gold. Here stands an 18-feet statue of Lord Bahubali. This is not an old statue but was installed in 2017. The consecration of the statue and the first Mahamastakabhisheka were performed in February 2017 and the rituals were led by Antharmana 108 Munishri Prasannasagar Maharaj, 108 Munishri Piyush Sagar Maharaj and Swasthishri Bhuvanakeerthi Bhattaraka Swamiji. 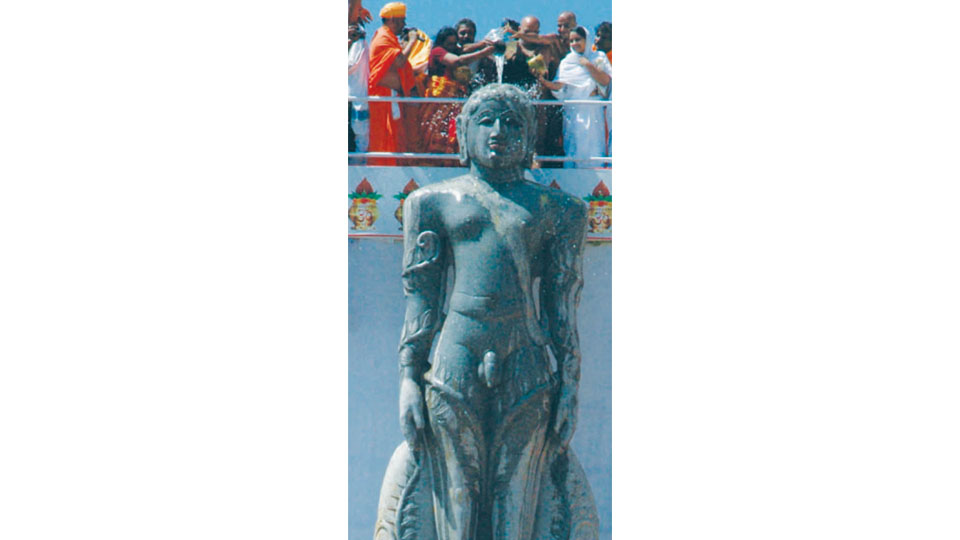 The statue installation was done by Mysuru’s Vishalendra and Madanavali and their children Mahaveera and Dharmendra Kumar.

Humcha or Hombuja in Shivamogga district is a Jain pilgrim centre and there are two statues of Gommateshwara — each measuring about 10 feet to 12 feet and belongs to the Hoysala period and maintained by the Hombuja Mutt.