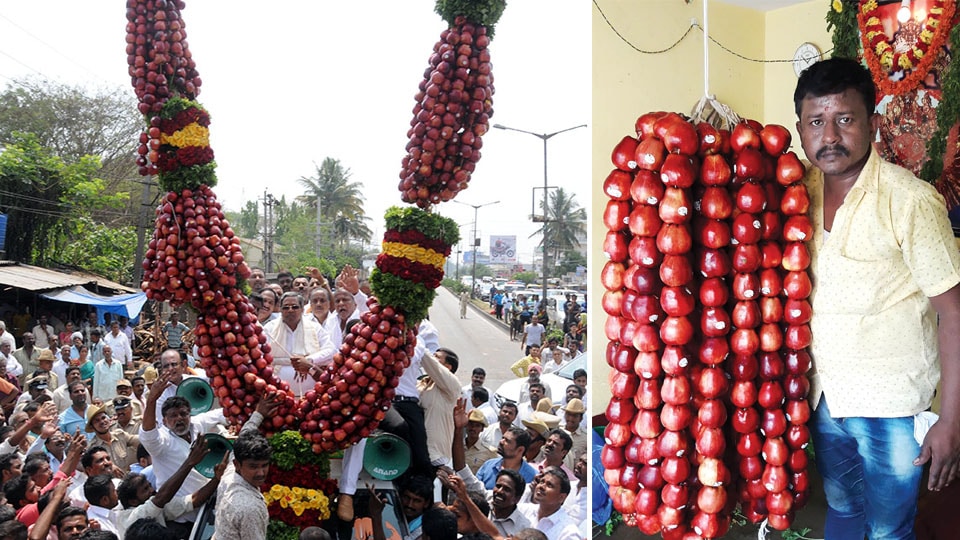 Saying it with APPLES

Gone are the days when political leaders are greeted with a huge garland of flowers. The trend is now to welcome them with garlands that are made either with apples or almonds. Interestingly, a politician’s stature is measured in terms of the weight of the garland that ranges from 500 kgs to over 1,000 kgs. This Weekend Star Supplement sheds light on the latest trend and identifies the makers of such attractive and expensive garlands.

If ‘saying it with flowers’ was a trend till recently, ‘saying it with apples and almonds’ is the latest trend where political party workers greet leaders with garlands made of thousands of apples. These huge garlands are lifted with the help of a crane and symbolically offered to the political leader who usually is on a campaign trail.

Such garlands were offered to Chief Minister Siddharamaiah at Hootagalli, former Prime Minister H.D. Deve Gowda at Nagamangala, JD(S) State President H.D. Kumaraswamy at Maddur and Energy Minister D.K. Shivakumar in Mandya. While the garland offered to Shivakumar, Deve Gowda and Kumaraswamy weighed about 400 kilograms, the garland that was offered to Siddharamaiah weighed 1,000 kilograms and over 750 kg apples were used to make it.

Garlands made of fruits are usually offered by devotees to the deities and to the newly-weds. Now, it has invaded the political arena so much so that traditional garlands of flowers are now becoming passé. The trend is either a garland made of apples or a garland made of dry fruits (almond) weaved along with flowers. Offering such special garlands has now become a matter of prestige with workers from different parties competing with each other to impress their leaders.

So what goes behind making of such giant apple garland, who are the people involved in the work and how is it ensured that the garland does not break?

The man who makes such garlands in city is Dhanraj, a resident of Kyathamaranahalli who is an expert in flower decorations and owns D.R. Flowers and Gifts at Boti Bazaar near Devaraja Market.

Dhanraj was told to make a 750-kg apple garland on Mar. 31, one day before Siddharamaiah hit the campaign trail on Apr. 1. “I was told to make an impressive garland and the garland was ready by 10 pm on Mar. 31. We used long needles and special silk thread that is produced in Tamil Nadu,” he revealed. 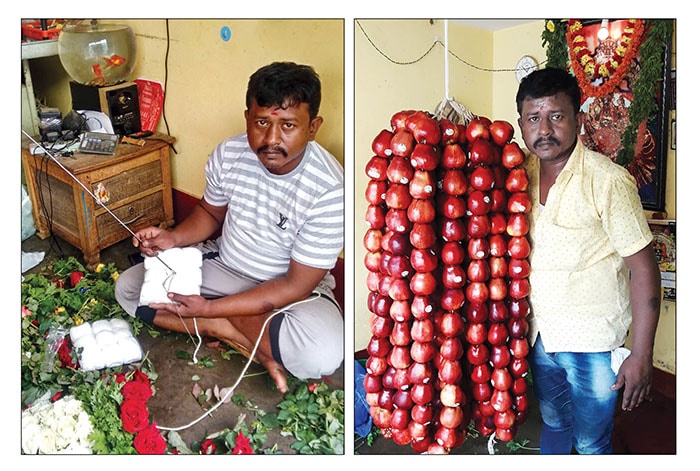 Dhanraj, the man behind the apple garland, is seen demonstrating how the special silk thread from Tamil Nadu is inserted into a long needle to create the fruity garland.

As soon as Dhanraj received the order, he knew that he was racing against time. “We purchased apples, thread, needles, flowers and leaves to be woven together neatly and proportionately. We used 250 strands of the silk thread to weave the garland and flowers and leaves were used at regular intervals all along the garland so that it looked beautiful. Thirty-six strands of the silk thread were exclusively used to string the apples together and 15 persons worked for 12 hours to accomplish the feat,” he explained.

The garland was prepared at Dhanraj’s shop at Boti Bazaar and was transported to Hootagalli in a goods vehicle where the garland it was offered to the CM. “Enough care was taken to ensure that the 30-metre garland does not break. Over 20 persons lifted the garland to load it on the goods vehicle and a 50-kg iron pipe was fixed to the garland so that it could be lifted by a crane,” he said.

“Overall, the garland weighed more than 1,000 kilograms as flowers and leaves were also used. It took Rs. 2-and-a-half lakh to make the garland that included the cost of materials and labour. It is better to present garlands made of apples or other fruits than huge flowers garlands since apples can later be distributed to party workers or the public and the money spent on making it is not wasted,” he said. The order for the giant apple garland was placed by Hootagalli Deshigowda and MUDA Chairman D. Dhruvakumar Abhimanigala Balaga. “As this garland was successfully made and delivered, I have got a few more orders. If JD(S) leader G.T. Devegowda wins from Chamundeshwari he is planning to garland party State President H.D. Kumaraswamy with a 1,000 kilogram apple garland. If CM Siddharamaiah wins Chamundeshwari, his supporters have placed an order to make a 200-kg almond garland,” he said.

READ ALSO  Only Ganesha can save us!

Thirty-six-year-old Dhanraj, son of Balakrishna and Jayamma couple, is known to make such unique garlands. Even with flowers, he can make the garland stand out. “I have been amidst flowers since my childhood and I have made my name as people search for my shop and take their tailor-made garlands. In Devaraja Market, there are many more experts who are deft in making such garlands. I became famous because of apple garlands becoming a hit in the election season,” he said.

There was a mad scramble to pick the fruits from the garland after it was offered to the CM at Hootagalli. This resulted in hundreds of crushed apples strewn all over the street.

A 500-kg garland made of almonds & flowers

A 500-kg garland made of dry fruits and flowers was put on Senior Congress leader N. Cheluvarayaswamy when he recently visited Induvalu near Mandya. Dhanraj had designed this garland too and it was lifted with the help of a hydraulic crane.

Around 250 kg of almonds and other varieties of dry fruit, and another 250 kg of roses made up the garland. It took more than a day for Dhanraj and team of 15 members to prepare the garland. People were, however, prevented from collecting the dry fruits from the garland.

The order for almond garland was placed by Congress leader Sachidananda and the total cost of the garland is three-and-a-half lakh.