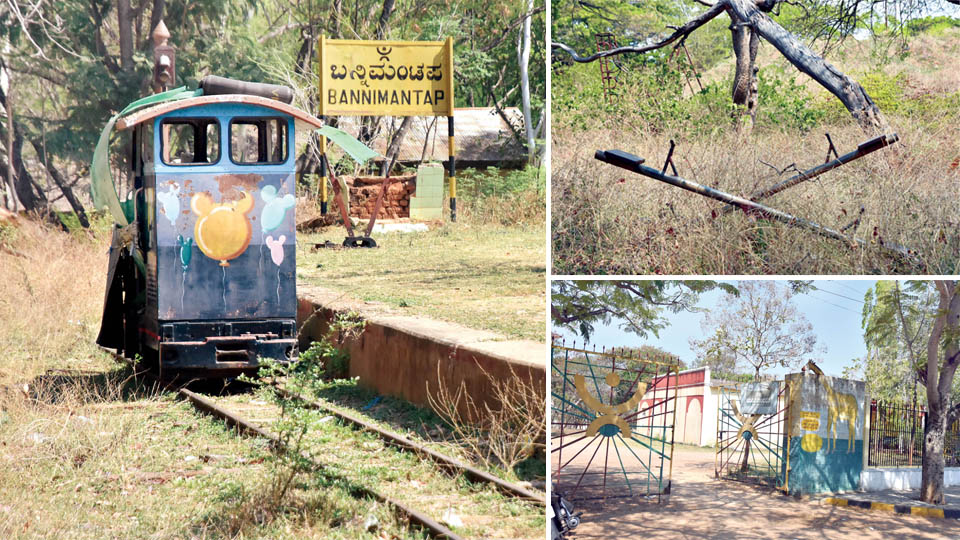 Bal Bhavan: All weeds no play

Bal Bhavan is now a dead and forgotten hole. If Mysuru needed a single and comprehensive symbol of neglect and mismanagement, Bal Bhavan should provide it. The vast area features an incredible bouquet of possibilities. One could visit it now to see the depressing and tall concrete structures full of weeds and wild growth. This was once a one-stop destination for children’s amusement.

Why do such places die? The answer is callous and mindless mismanagement by Government officials and elected representatives who don’t care and who don’t work in tandem. They don’t care for Mysuru

and its children despite putting years of professional and social service in Mysuru, enjoying the facilities and privileges that the city gives them.

The listed objectives of Bal Bhavan continue to be grand and lofty — to promote and bring out the creative talent among children by exposing them to various extracurricular activities, nature and adventure camps, art, craft, theatre, films and ecology. But all these objectives remain only on paper. The way the officials have misused tax payers’ money makes one weep. Take a look in this Weekend Star Supplement.

Bannimantap is known for two things — Torchlight Parade Grounds, which is thankfully in a good condition due to the facelift it gets every year during Dasara and the other, is the Jawahar Bal Bhavan, which has now become an eyesore.

Weeds have grown in abundance, making it impossible for children to play here, for whom this place was set up in 1977. All this due to sheer apathy of officials and their delaying tactics that have ultimately resulted in the tax payers’ money going down the drain.

A popular place among children once upon a time, now the Bal Bhavan looks like a haunted and a deserted place dominated by weeds. Long before the Bal Bhavan reached its present state of neglect, children came here just to take a ride on the toy train, which ran on the 1.1 km circular track every Saturday and Sunday, with bogies full of screaming children. But today, the toy train engine lies in an idle state, with the bogies rusting away.

The 13-acre Bal Bhavan land is owned by the Mysuru Urban Development Authority (MUDA), which had leased it out to the Department of Women and Child Welfare for 30 years from 1977 to 2007.  The lease, which ended in 2007, has still not been renewed or seen a change in the status quo, even after 13 long years.

After the deal was signed, the Department had created an amusement facility for children. During weekends, festivals and summer holidays, the whole of Bal Bhavan was filled with fun and frolic of children and parents alike. Viewing cinemas, playing on the slides, reading children’s books and listening to stories were all part of the visit to Bal Bhavan. Parents used to host birthday parties of their children here which included a ride on the toy train too.

The toy train which could accommodate 60 children at a time is now filled with dust and grime. There is no drinking water facility. The roof tiles and the doors of public toilets are broken and it points to the utter neglect of the place.

In 2016, MUDA officials took up the responsibility of revamping Bal Bhavan themselves and also got a grant of Rs. 5 crore from the Government to carry out renovation works.

The gate was conceptualised as look-alike of animals such as lion, peacock, elephant, etc. MUDA officials also said that the narrow-gauge rail wooden tracks, now eaten away by termites, would be replaced by concrete tracks which would then facilitate smooth operation of the once popular toy train ride.

Nothing but concrete empty structures which have come up inside the Bal Bhavan are standing testimonies that were implemented half way through and forgotten. Packs of stray dogs roam freely in the premises and fully grown weeds have become a haven for snakes and scorpions. There isn’t even a security guard at the entrance to keep unwanted elements at bay. The place resembles a haunted house, displaying callousness of officialdom bold, loud and clear.

Star of Mysore had highlighted this issue two years ago but the situation hasn’t changed much at Bal Bhavan in spite of this.

The decision to improve the present conditions of Bal Bhavan have been taken up by Jawahar Bal Bhavan Society, said the Society President Chikkamma Basavaraju. A meeting in this regard was held at Bal Bhavan premises on Mar. 17. Since the 30-year lease period granted by MUDA has ended, discussions to renew the lease are now going on with officials from MUDA and Women and Child Welfare Department.

A collective decision was made at the meeting to either get the lease renewed or urge the MUDA officials to complete the half-done renovation works.

“The toy train, filled with happy children, should start running again. Children, with their parents should flock this place and enjoy their holidays, birthday parties and other activities in the days to come,” Chikkamma Basavaraju, told Star of Mysore. Chikkamma Basavaraju has over 25 years of experience in Government service and has been a Corporator in the Mysuru City Corporation (MCC). She is presently the City President of BJP Mahila Morcha.

Even MLA Tanveer Sait has instructed the officials to speed up the renovation works, with all the necessary facilities and amenities.