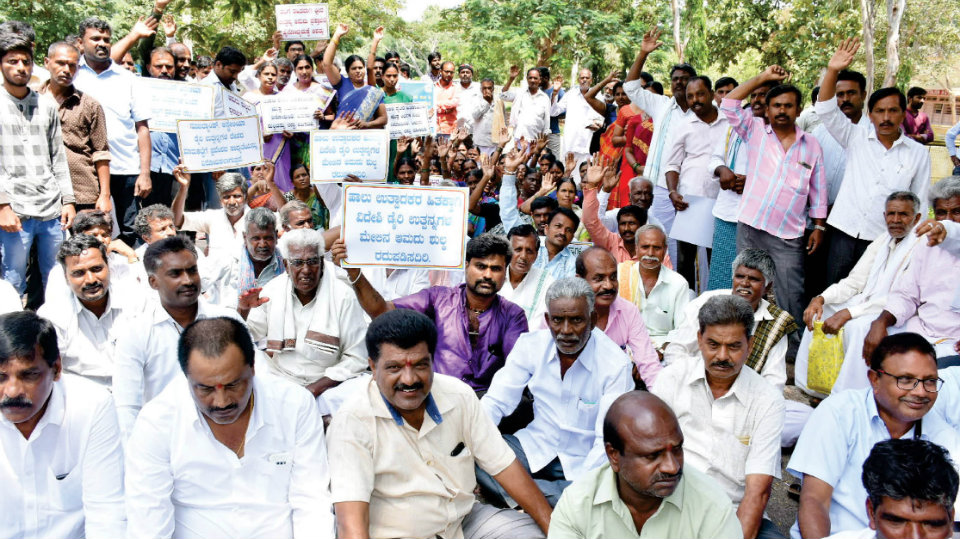 Mysuru: Raising voice against the Centre’s move to import duty-free milk and milk products from other countries under the RCEP (Regional Comprehensive Economic Partnership) trade agreement, milk producers under the banner of MYMUL (Mysuru Milk Union Ltd.) and Mysuru Milk Dairy Employees staged a demonstration in front of the Deputy Commissioner’s Office this morning. Their protest was part of a State-wide stir.

According to the protesters, the Centre’s attempts to implement the RCEP agreement will sound a death knell for millions of milk producers across the country. They said that the Centre’s action will hit the dairy sector very hard, particularly at a time when the country is set to achieve a production target of 330 million tonnes of milk every year by 2033.

Claiming that over 10 crore farmer families are dependent on dairy industry which at present is flourishing in the country, the protesters said that there were 1,081 milk societies under MYMUL, the protesters maintained that abolition of import duty on milk and milk products will push rural families to the brink of disaster.

Highlighting the many disadvantages to dairy farmers under the RCEP agreement, the protesters urged the Centre not to make any import-free agreements with any other country in respect of milk and milk products and to promote dairy farming to a much larger extent, which can create more number of jobs.