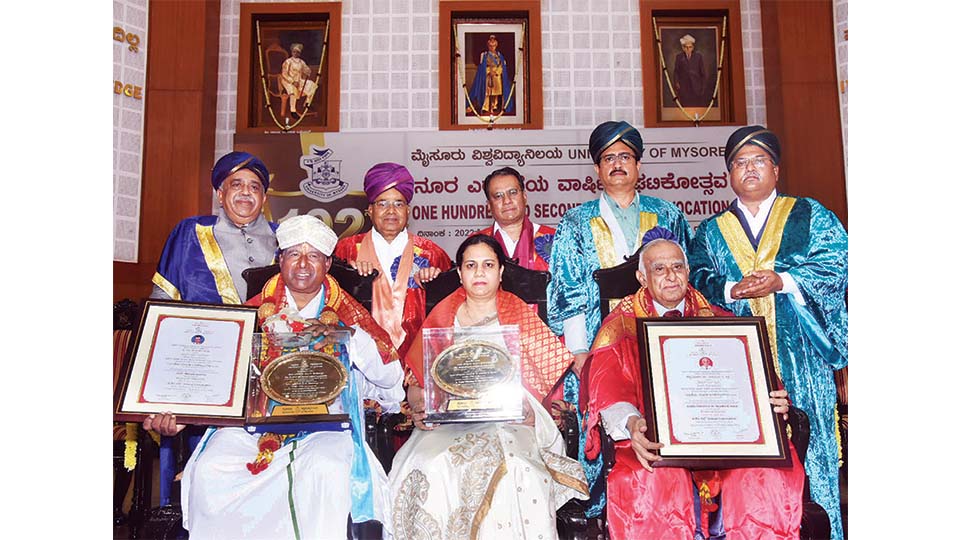 Puneeth Rajkumar’s wife  Ashwini received the honour on behalf of her late husband.

It was an emotional moment for Ashwini Puneeth Rajkumar as she climbed the stage along with other dignitaries. Thespian Dr. Rajkumar’s family including his son Raghavendra Rajkumar, Puneeth Rajkumar’s daughter Vanditha and several other family members were present at the hall. All of them were seated in the front row.

Wearing the traditional dresses and the Mysore Peta, the guests led the Doctorate awardees onto the stage and the recipients were introduced one by one with their photos displayed on the LED screen. As Puneeth Rajkumar’s name was called out, the Crawford Hall reverberated with claps, whistles and loud cheers.

As the late actor’s profile was read and his movie clips were shown on the screen with his famous dialogues and dance moves, Ashwini became emotional and the deafening cheers made each member of the audience recall the contributions of the late actor at such a young age, be it to the cinema field or charity.

Puneeth Rajkumar is the second personality after late Suttur Mutt Seer Sri Shivarathri Rajendra Swamiji to get the Doctorate degree posthumously. Incidentally, about 46 years ago (Feb. 8, 1976), the University of Mysore had conferred honorary doctorate on Puneeth’s father. Dr. Rajkumar was 46 years old when he received the Hon. Doctorate and now after a gap of 46 years, his late actor-son, who died at the age of 46, received the honour posthumously.

Dr. V.K. Aatre rose to become the head of the country’s top most Defence organisation — DRDO — and he also served as a Scientific Advisor to the then Defence Minister George Fernandes. He was awarded Padma Bhushan in 2000.

M. Mahadevaswamy, who was born at Krishnapura in Malavalli taluk of Mandya district in 1959, is  an acclaimed folk singer, having performed at various national and international stages. He is one of the famed singers of Lord Manteswamy’s life history.

After receiving the Honorary Doctorates, Puneeth Rajkumar’s wife Ashwini did not address the audience. Instead, Puneeth’s brother Raghavendra Rajkumar spoke where he recalled Puneeth as a 9-month-old baby when Dr. Rajkumar was given the Doctorate in 1976.

“This is a unique, momentous and emotional occasion for all of us and our family considers the University of Mysore as a temple. Puneeth and Dr. Rajkumar firmly believed that if there is dedication in work, awards and recognitions would come automatically. We would like to continue the family’s service to the masses,” he added.

Receiving the honour, Dr. Aatre said that the honour has a special place in his heart. “Universities must encourage scientific education so that the scientific spirit is kindled in every student. This will enable India to leap into more areas of science and technology and also defence,” he said.

On his part, Mahadevaswamy, turning emotional, said that he would dedicate the doctorate to Dr. Rajkumar. “I grew up seeing his movies and all of them had a social message. I came from a humble background and today I am in front of you getting a doctorate,” he said.