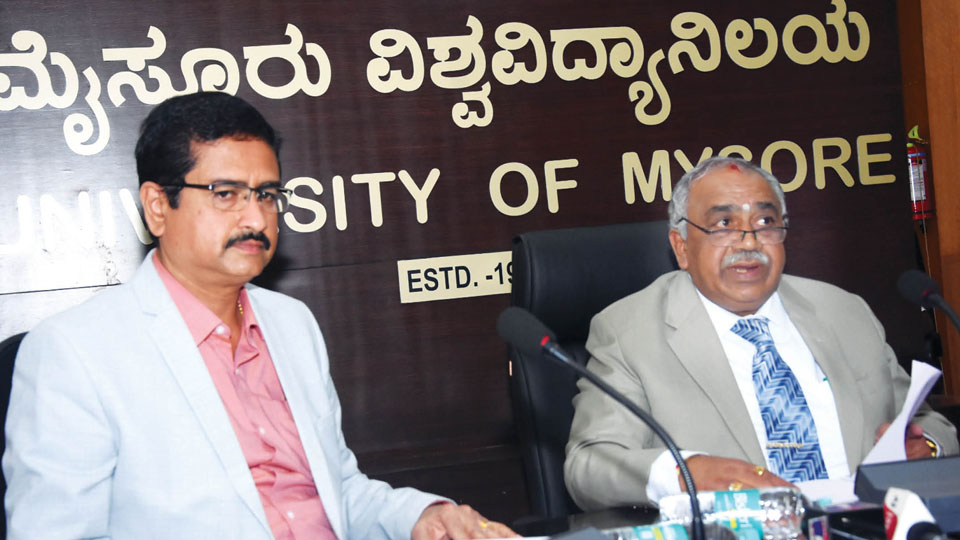 Mysore/Mysuru: As a tribute to late actor Puneeth Rajkumar, the University of Mysore (UoM) will be conferring Honorary Doctorate award — Honoris Causa (D.Sc) — posthumously on Puneeth Rajkumar, fondly called Appu and ‘Power Star’, at its 102nd Convocation to take place on Mar. 22.

Pointing out that Puneeth Rajkumar is the second personality after late Suttur Mutt Seer Sri Shivarathri Rajendra Swamiji to get the Doctorate degree posthumously, Prof. Hemantha Kumar said that the University has spoken to Puneeth’s wife Ashwini on receiving the Hon. Doctorate at the University Convocation to take place on Mar. 22.

Noting that Puneeth’s father thespian Dr. Rajkumar too was conferred the Doctorate by UoM in the late seventies, the VC said it is a rare feat for a father and son to be accorded the Doctorate from the same Varsity.

Prof. Hemantha Kumar said that M. Mahadevaswamy, who was born at Krishnapura in Malavalli taluk of Mandya district in 1959, is  an acclaimed folk singer, having performed at AKKA (Association of Kannada Kootas of America) conferences at America and at several places across India including Delhi, Varanasi and Nagpur.

Dr. V.K. Aatre, who was born in Bengaluru in 1939, is an Electrical Engineering Graduate from UVCE in Bengaluru and rose to become the head of the country’s top most Defence organisation — DRDO. He had also served as a Scientific Advisor to the then Defence Minister George Fernandes. He was awarded Padma Bhushan in 2000 and Karnataka Science and Technology Academy accorded him the Lifetime Achievement Award in 2014.

Continuing, the VC said that S.C. Sharma, Director, NAAC (National Assessment and Accredition Council), will deliver the Convocation Address at 11 am  on Mar. 22 at Crawford Hall. Governor Thaawarchand Gehlot, who is also the Chancellor of all State-run Universities, will preside. Higher Education Minister Dr. C.N. Ashwathnarayan will be present.

Pointing out that a total of 28,581 students will receive their degrees at the Convocation, he said that of these 18,567 are female and 10,014 are male students.

Also, 157 research students, including 49 women and 108 men will receive their Ph.D degree. A total of 376 Gold Medals and 214 prizes will be distributed among  213 rank holders, out of which 158 are women and 55 are men, he said adding that the students who  receive degrees include 22,747 Under-Graduate students and 5,677 Post-Graduate students.