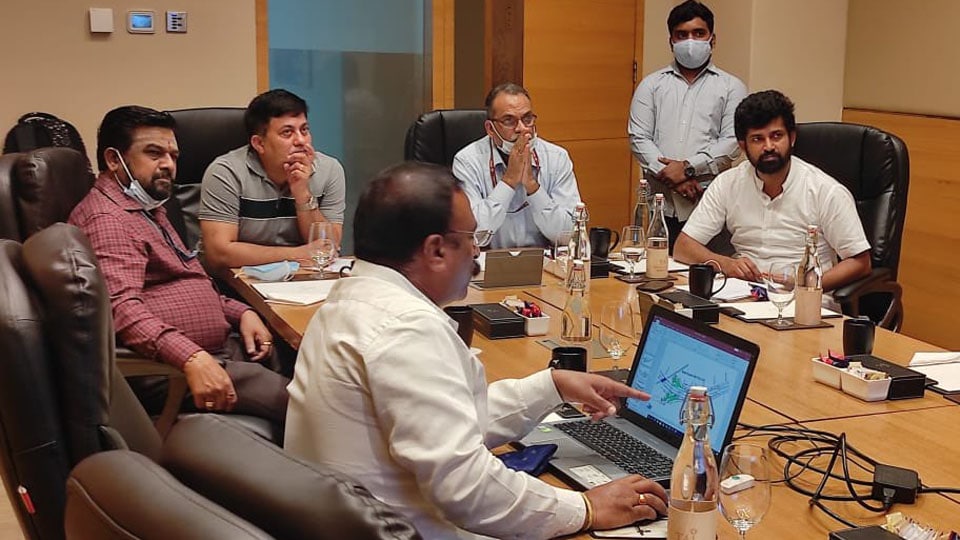 Mysore/Mysuru: The construction of 10-lane Mysuru-Bengaluru Economic Corridor is in full swing and it is scheduled to be completed by October 2022. But the estimated cost of Rs. 8,066 crore might exceed by another Rs. 700 crore.

The corridor comprises a six-lane access-controlled carriageway for traffic to move at a high speed and a two-lane service road on either side for the benefit of local traffic.

At a meeting of the National Highways Authority of India (NHAI) that is executing the project, it was revealed that the project cost may escalate further by Rs. 700 crore.

The meeting held at a private hotel in Bengaluru near the Kempegowda International Airport yesterday was chaired by Mysuru-Kodagu MP Pratap Simha and was attended by NHAI Member (Projects) R.K. Pandey, Regional Officer Akhil Ahmed and Project Director Sridhar.

The meeting discussed the proposal of building a flyover and rest area near Columbia Asia Hospital junction in Mysuru, additional acquisition of lands to build entry and exit points near Bidadi, Ramanagara, Channapatna, Maddur, Mandya and Srirangapatna.

Also, there is a demand of villagers to build a bridge across river Shimsha at Maddur and this issue too was discussed.

Simha, who met Basavaraj Bommai at Bengaluru on Friday, appealed him to release a Rs. 200 crore grant for acquisition of identified land meant for Runway expansion at the Airport in Mandakalli. Pointing out that 240 acres of land was needed for expansion plans and the KIADB has identified 115 acres of land for the same, Simha stressed on the need for expedition of the runway expansion.

In the wake of Tobacco Auction set to commence in the last week of this month, Simha met Tobacco Board Chairman Raghunath Babu and discussed with him about the Sept. 20 meeting to take place between Tobacco growers and buyers.

The MP also met Mines and Geology Minister Halappa Achar  and sought his co-operation for expediting 10-lane Mysuru-Bengaluru Highway, by removing all hurdles.