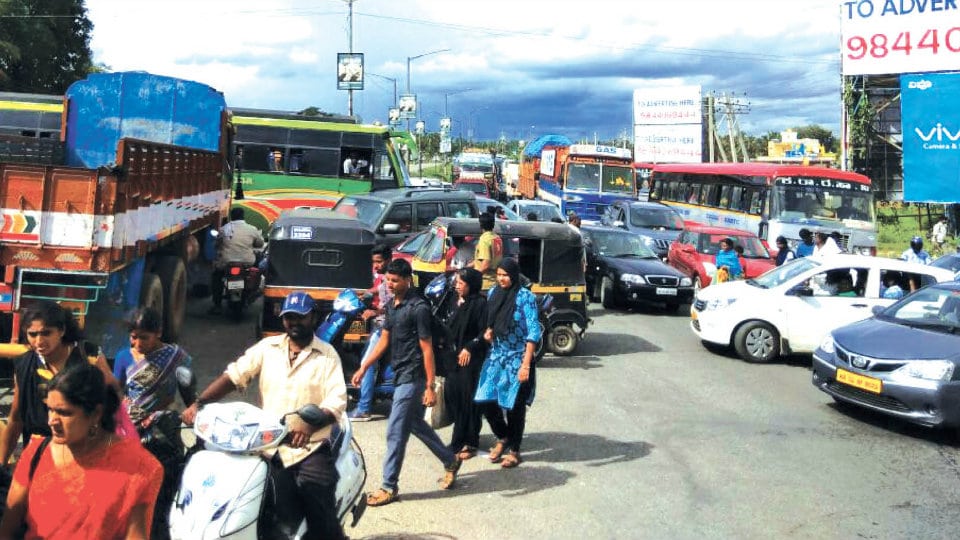 Mandya: The Cauvery Pushkara Mela held once in 12 years in Srirangapatna, may not draw as much crowd as the Kumbh Mela in other parts of the country, but the 12-day Mela drew lakhs of people yesterday throwing traffic completely out of gear on the busy Mysuru-Bengaluru Highway.

It was the sixth day yesterday and there was a sea of devotees descending on the serene Cauvery River banks from different States including Tamil Nadu, Maharashtra and Andhra Pradesh to have a dip in the holy river.

Traffic pile-up: The Police and the organisers were taken completely by surprise with such a surge in crowd as the devotees came in all forms of transport — be it buses, cars, two-wheelers, lorries, trucks, tempos and trains.

The traffic piled up for nearly three kilometres on either side of the Highway as the parking arrangements became totally inadequate. Being a Sunday and since the Dasara holiday season is almost beginning, also added to the rush, disrupting the regular flow of traffic. The Police had to make herculean efforts to control the traffic.

Parking arrangements: The parking arrangements have been made at the premises of Sri Ranganathaswamy Temple. In addition to this, Police have made arrangements at the open grounds near Gosai Ghat and also near Sri Nimishamba Temple. All the parking lot was full yesterday and hence, people were forced to park the vehicles on either side of National Highway and trudge long distances to reach the Cauvery Pushakara Mela that was taking place.

Trainloads of bhaktas: The bhaktas started arriving by train from Saturday night itself to have a darshan of Sri Ranganathaswamy and were found standing in long queues. They were provided drinking water and eatables.

The devotees then thronged the bathing ghats at the Cauvery for the holy dip and performed pujas, japa, sankalp snana, pitra tarpana, pinda pradhana, shraadda, swayampaka dhana and godhana. After 6 in the evening, Maha Mangalarathi was performed at the Cauvery River.

READ ALSO  Ban orders in Srirangapatna from June 3 to 5

Bath at ban areas: The District Police had made all arrangements to see that the people gathered were not put to inconvenience by bringing additional forces. Boards were put up restricting the bathing areas.  However, the people as usual continued to ignore the warning boards and were seen performing pujas and having baths in other areas.